REVIEW: Tessa Lark and the World Premiere of 'Cycle of Life' 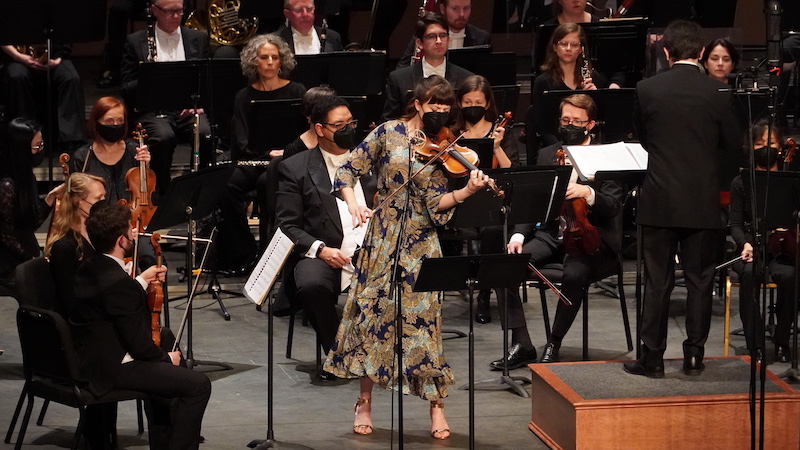 The piece, inspired by artist Richard Jolley's glass and steel installation at the Knoxville Museum of Art, was absolutely in sync with the artwork, and Tessa's performance fully conveyed the cyclical story it was designed to tell.

It was a night to remember for the crowd at the Tennessee Theatre, who have come to know (and love) Tessa through prior performances of the Korngold and Torke concertos. Let me set the stage.

An Entrance to Beat All Entrances

I’d skimmed the program and knew the piece was comprised of seven through-composed movements based on the artwork that inspired it: Primordial, Emergence, Flight, Desire, Tree of Life, Contemplation, and Sky. Footage of the artwork would be projected on a screen above the orchestra. I couldn’t wait.

The orchestra tuned. Demirjian took his place on the podium. But wait. Where’s Tessa?

"Primordial," the aptly named first movement, began. With shimmering strings creating an ethereal background, oboe and flute solos literally rose out of an alternatingly dissonant and tonal backdrop of longing. The brass provided the terra firma for the orchestra to build upon. It had a truly biblical feel.

And still no Tessa.

Then, in the second movement, "Emergence," I noticed a violinist somewhere in the middle of the firsts and seconds who put her violin under her chin and took a deliberate up-bow against a sea of down-bows. With the grace of a ballerina, she slowly stood while playing and simply walked down the aisle between the two violin sections toward center stage. 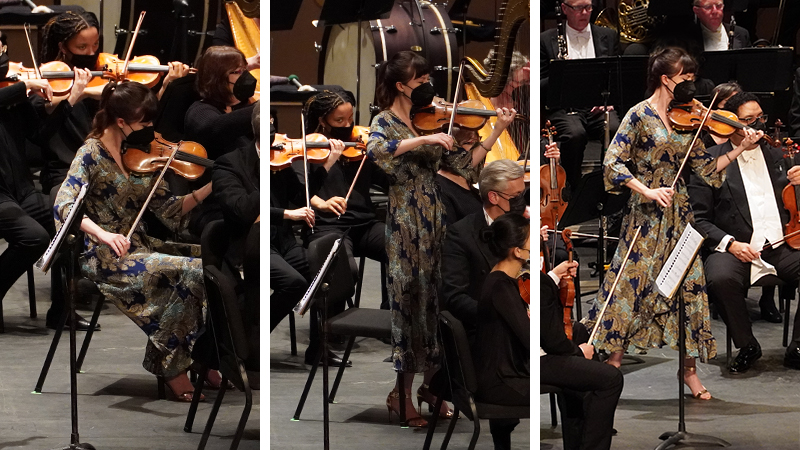 It was one of the most glorious visual moments I have ever witnessed at a concert. Tessa’s rich tone led the way as she joined the divine musical landscape. And the story began – a story we, the lucky listeners, could write for ourselves.

Storytelling At Its Finest

In the manner that great writers bring forth their unique worlds through their words (think Thomas Wolfe and his depictions of North Carolina), Tessa brings forth a "humankind" in her playing that envelops you in the warmth of her Kentucky roots. She gently sways, as if her movements will gradually awaken everything around her. She exudes a graciousness that welcomes you to join her in the exploration of the music. Her sound is rich, yet always maintains an underlying purity. One can’t help but wonder, how has she already developed such emotional gravitas? How does she have the confidence to let the music speak for itself without disingenuous histrionics? And the bigger question, how does she maintain her balance in those sky-high strappy sandals?

And, oh, what luscious colors Schachter creates. Nothing is random. Everything makes perfect sense yet is quite different from anything I’ve heard. Schachter keeps you on your toes. Just when he turns up the virtuosic fireworks, he pulls back in the most compelling way. (There is a fiery passage with full orchestra and soloist where you’d bet the farm he’s going to launch Tessa into the upper stratosphere – and yet he pulls back into hauntingly-beautiful harmonics. It is at once jarring and satisfying.) It would be so easy to overplay this moment. And a less confident violinist would surely do so. But Tessa seems to understand implicitly what the composer wants. More importantly, she seems to have embraced the passage as her own.

Schachter uses the sixth movement, "Contemplation," to give us a moment to reflect not only on the beauties of the life cycle, but also its tragedies and heartbreak. It is the most unlikely, and yet perfect, cadenza. Again, Tessa is in full command of her instrument and the music. There was a momentary pause in which you could honestly have heard a pin drop – and Tessa held the moment as we in the audience held our collective breath.

Tessa’s performance was stunning, lovely, and pure. But the cycle was coming to a close. And as it did, she slowly, gracefully moved back to her chair.

I have to admit, I knew Tessa’s performance would be great and I had already fallen in love with the piece. That’s because I was granted access to the first rehearsal of the piece with full orchestra two days earlier. This was the moment when all parties involved would hear the work come together for the first time.

The entire two-hour rehearsal was devoted to the concerto. I wondered if Tessa would be called at the top of the rehearsal, and she was. Tessa, in a mid-calf brown dress and big ole’ white sneakers, entered to enthusiastic and genuine applause from the orchestra.

Tessa said little during rehearsal. Not once did she stop the orchestra for her own benefit. Not once did she act as if she were anything other than a member of the ensemble, allowing everyone the time they needed to work through various musical and rhythmic intricacies. She was in control of her music, which meant Demirjian could focus on fitting all the instrumental lines within her framework. Tessa was the axis. Everything revolved around her. 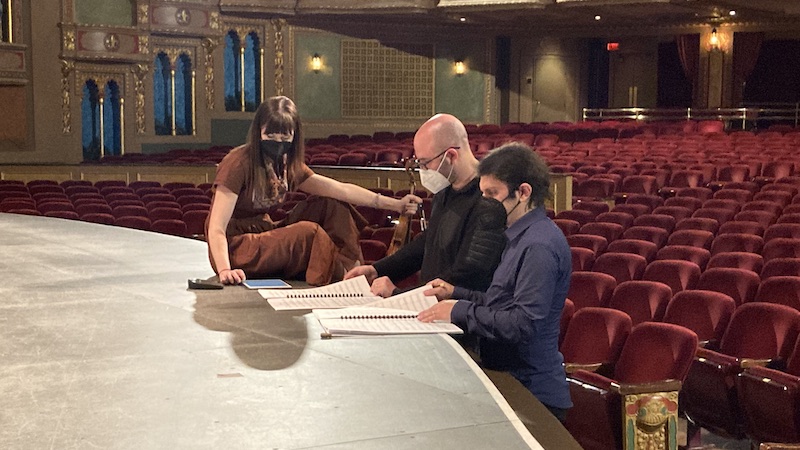 During this rehearsal, the only other people listening were Schachter and the associate conductor. At one point, Schachter was seated a few rows in front of me. I wondered how he felt listening to music that has surely been in his head for years suddenly finding its way into the fingers of these musicians. He moved not a muscle. His posture was erect and still. Was he second-guessing himself? ("Hmm, maybe I should have been more specific about the dynamics there" or "I wish I’d brought in the violas sooner.") Or was he, in fact, hearing his work come to life in the most thrilling and beautiful manner, with a violinist who exuded sheer joy? What was he thinking? Oh, that I knew!

Rehearsal ended. Tessa and Aram turned toward the composer. I saw the slightest nod from Schachter. Was that a good nod? I’m going with a resounding yes.

April 24, 2022 at 11:21 PM · Diana, thank you so much for your beautifully written chronicles of Tessa Lark's artistic arc. I always enjoy reading them.

April 25, 2022 at 12:58 AM · Paul, thank you for your lovely comment. It's been wonderful to get to know Tessa's artistry through her multiple appearances here. I'm delighted that you have enjoyed my pieces about her! They have been a joy to write.

April 26, 2022 at 05:28 PM · Diana, I felt like I was sitting right next to you at the concert! What an amazing entrance/exit for Tessa—brilliantly conceived. Thank you for sharing!