January 21, 2022, 12:04 PM · I am continually impressed by the musical talent housed within our college and university faculties. And I’m not just talking about the big-name conservatories. I recently viewed a livestream violin recital by Professor Susanna Klein at Virginia Commonwealth University and one word kept coming to mind: Wow! 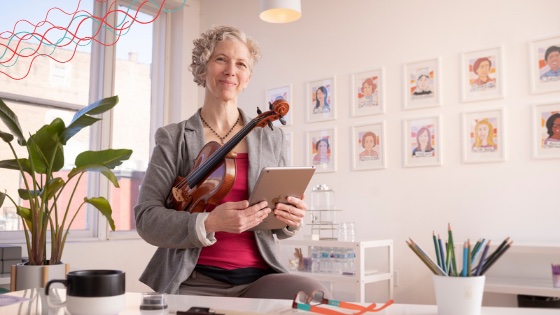 I could discuss her intonation, her technical prowess, her stage presence. But clearly I wouldn’t write "wow" if she’d played out of tune, fumbled her spiccato, or presented herself like a nervous wreck. She hit it out of the ballpark on all counts, as did her stellar pianist, Jeremy Thompson, her perfect musical partner. And the applause from the live audience at VCU confirmed I wasn’t the only one who thought so.

Beyond the skills and musicianship on display, the repertoire selected was exciting. I knew only two pieces on the program, yet discovered five more I would dearly love to hear again (and one I might even attempt to play). A link to the program and accompanying notes written by Ms. Klein are included in the YouTube description.

In a twist from traditional programming that typically starts with the earliest piece written and progresses to the most contemporary, Ms. Klein began with music by a living composer – Jhula Jhule by Reena Esmail (b. 1983). She followed with Beethoven’s (1770-1827) Violin Sonata No. 7 in c minor, Op. 30, No. 2. Rather than feeling jarred by the two-century backward jump in time, the sequence of the pieces beautifully demonstrated how lush and rich Beethoven’s work is, and how deeply romantic. In fact, "romantic" could easily have been the theme for this concert, as Ms. Klein seemed to bring forth the romantic nature in each composer she presented.

After a 30-second offstage break to tune following the Beethoven, Ms. Klein returned with Flausino Vale’s (1894-1954) Preludios No. 3 and 1 – beautiful solo violin pieces filled with double stops, fingered harmonics, and technical challenges. The duo was followed by my personal favorite of the evening, Phillip Fridriech Böddecker’s (1607-1683) Sonata in D minor, which had us firmly rooted in the Baroque style. Again, one might think this would be a jarring juxtaposition, but the contrast made clear the layered complexity of this Baroque gem, with its underlying romantic spirit.

Next, we heard Karol Szymanowski’s (1882-1937) La Fontain d’Arethuse, followed by an exquisite performance of Edward Elgar’s (1857-1934) Salut D’Amour. If Fontain was the icing on the cake, then Salut was certainly the cherry on top. It was a wonderful way to end an absolutely beautiful hour of music, exquisitely performed by both artists.

Author’s note: Susanna Klein is my online violin teacher and a frequent contributor to violinist.com.

January 22, 2022 at 05:17 AM · Wow. WOW!!! Gorgeous playing from both players, and great programming too. Thanks for making the whole thing available on YouTube. It's quite an undertaking for a university violin professor to prepare such an challenging program. There are so many demands on one's time. But Susanna has done it -- brilliantly -- and this YouTube is a fitting and hopefully lasting monument to her artistic accomplishment at this stage of her career.

January 22, 2022 at 01:51 PM · Paul, great comment! I hope you also saw Susanna's program notes in the YouTube description, which I thought were so much more interesting than typical program notes in that they capture her personal experiences with each piece.

January 22, 2022 at 09:27 PM · Before we get into the program, being old school, I am always amazed at the new tech: tablets instead of music. It took me a moment to realize what those black objects were on the floor that each one of them had. How long does it take to get used to?

I loved the whole program. And yes, the two of them were perfect musical partners. The Beethoven was magnificent. But of the pieces I was not familiar with, the Szymanowski was by far my favorite. The impressionist-like quality of the piece whisked me away to wonderful places. And when I heard the Elgar after that, I floated away to an emotional high. I did want to hear so much more! Thanks so much for sharing this recital!

January 22, 2022 at 10:44 PM · Thank you, Diane, Paul and Joe for your kind words!! Joe, in answer to your pedal and padlet question, I switched last summer, and I'm not used to it yet (you can probably see me moving it around, trying to find the best location). I am, however committed and want to keep doing it, even if it's nerve racking sometimes. The ability to have all my music in once place, especially for teaching is so wonderful. Sharing markings with others is easy, cleaning up the part so it's not so messy, last minute reminders in color are some of the benefits. The biggest thing is that it has gotten rid of the lighting issue as the tablet is backlit. Sitting and using the pedal is much easier than standing, which I'm still getting used to ??

January 22, 2022 at 11:29 PM · Thanks so much for responding Susanna. Yes, nerve-racking is what I might think as it's such a big change but it's obviously worth it based on all the pros you listed. Thank you for the wonderful music you make. This is the first time I've ever heard you play and you can be sure I will seek out everything you have recorded and hope some day to hear you in person.