March 16, 2021, 12:01 PM · When I had the opportunity to write about violinist Stefan Jackiw, the first thing I did was head to YouTube to check out his playing. I happened upon his performance of Bruch’s Scottish Fantasy and, well, let’s just say I was a fan by the end of the first movement and a rabid fan by the end of the second. There are over 500,000 views of that performance, and I’m crediting myself with at least 1,000. 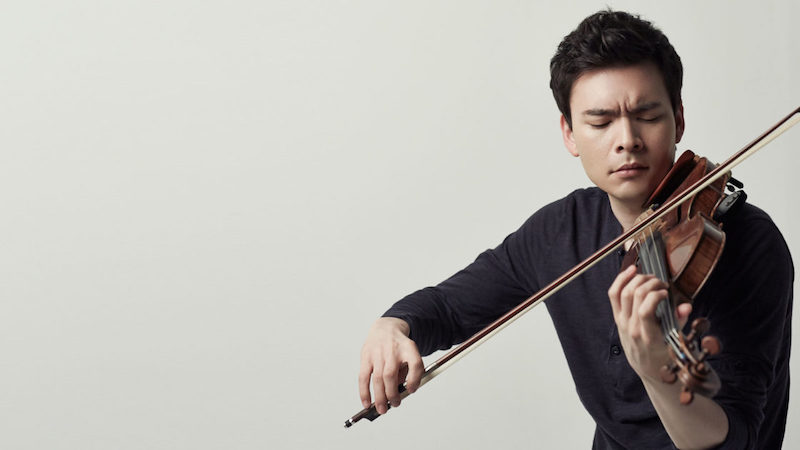 Violinist Stefan Jackiw.
I’ve been a loyal and enthusiastic participant of Stefan’s Sessions, his online exploration of various concerti, since writing about them when they began last summer. (You don’t have to be a great violinist to watch.)

Stefan promised us a deep dive into the Tchaikovsky, Sibelius, and Mendelssohn concertos — then added two more (Mozart #5, Prokofiev #2), and he’s hinted at future installments (possibly Bach). The violinists who perform for him are not simply career-bound wunderkinds — they’re serious students from all over the globe at various skill levels. There’s no charge to spend these evenings in his company — just sign up online. Stefan doesn’t use a fancy streaming platform — just good old Zoom. And, probably my favorite part, Tech Support is enthusiastically provided by Stefan’s wife, clarinetist Yoonah Kim.

In fact, it was Yoonah who typed into the chat at the last session, "Stefan just got appointed to the Mannes faculty!" YES, I screamed at my computer screen! After watching Stefan teach these sessions and hearing his thoughts on his own musical upbringing, most notably his invaluable time studying with violinist Donald Weilerstein and pianist Robert Levine, and knowing his qualifications on paper, I knew that Stefan heading to the Mannes School of Music at the College of Performing Arts is a match made in musical heaven.

Stefan will begin teaching both undergraduate and graduate violin students at Mannes in September 2021. And while it’s difficult to predict Covid safety protocols moving forward, said he plans to teach in person in New York City, working around his performing schedule. Stefan hopes to coach chamber ensembles as well. "Chamber music has been an important part of my musical life since I was a student," Stefan said, "And this repertoire represents some of my favorite music. Learning to listen carefully and sensitively is best achieved through playing chamber music. It’s how I discover the ideas my colleagues have."

Stefan is one of those rare humans who can do and teach. There is something in his demeanor when working with a student that indicates he not only has something of value to share, but that he fully expects to learn from them as well. Although the students who perform in the sessions are clearly not yet in Stefan's technical realm, he treats them as if they are equals in the pursuit of musical meaning.

But don’t just take my word for it. Check out Stefan’s Tips, in which he uses concerto passages to break down his approach to various technical challenges and, in this case, the use of vibrato. Or this one, where he creates a link between left-hand structure and shifting, intonation, and sound quality. He has a fun tutorial that uses the opening of the Mendelssohn concerto to show how to tune to your open strings.

Another in which he demonstrates the importance of the right-hand pinky in bow control by playing a fiendishly difficult Tchaikovsky passage while holding the bow at the tip instead of the frog. And he’ll tell you what someone said to him right before he went onstage with the Boston Symphony at age 17 that changed how he feels about nervousness. Learn about his backstage warmup routine, how he juggles repertoire, and even practices scales.

I have always held teachers in the highest regard. They have figured out how to articulate that which we need to understand in order to progress in a given field. I embrace the beautiful words by John Steinbeck, which I have quoted in the past:

"I have come to believe that a great teacher is a great artist, and that there are as few as there are any other great artists. Teaching might even be the greatest of the arts since the medium is the human mind and spirit."

I am thrilled for those fortunate students whose minds and spirits will be in Stefan's care as he steps into this new role.

March 17, 2021 at 12:05 AM · What a beautifully written article, Diana. He is a wonderful artist and pedagogue, and your admiration and appreciation of him comes through so clearly in this piece.

March 17, 2021 at 02:46 AM · I love the enthusiasm in your writing Diana! I could just about hear you yelling "Yes" at your computer screen! Stefan is beyond lucky to have you write about him. I just listened to a few of the links from the article and in the first two I listened to, I was so pleasantly surprised to hear him talk about the Brahms and Mendelssohn violin concertos, my two favorites. And I had to laugh while listening to the part about the right hand pinky when without a blink of an eye he jumped into an impossibly difficult section of the Tchaikovsky and then continued talking! And then a repeat holding the wrong side of the bow. What a marvelous lesson!

I look forward to listening to many more of his videos and tips and now realize how lucky the students at Mannes are to have him as their teacher! Oh my! A wonderful opera director, Laura Alley, whose productions I’ve stage managed in a number of companies, has been on their faculty for years so I know he’s joining a very talented faculty.

Thank you for a wonderful introduction to Stefan Jackiw.

March 17, 2021 at 12:39 PM · David & Joe, Thank you for these lovely comments. It's been my honor to write about Stefan and to participate in his sessions (which anyone can do). That said, I can't say I've mastered that particular passage in the Tchaikovsky, even holding the bow at the right end! But I can dream...