March 5, 2021, 11:41 AM · Personally, I’m still reeling from the announcement that Rachel Barton Pine was going to tackle a different violin concerto each week for 24 weeks. Twenty-four weeks? And now I hear she’s layering on the complete unaccompanied Bach Sonatas & Partitas because, well, because she can. An ambitious undertaking by anyone’s definition. But all in a day’s work for this Herculean violinist who clearly must never sleep.

Rachel’s latest venture is called RBP on JSB: The Bach Masterclasses. During her six-part bi-weekly series, she’ll work with various up-and-coming violinists from conservatories such as the Curtis Institute of Music, the Juilliard School, Oberlin Conservatory of Music, the New England Conservatory, the Shepherd School of Music at Rice University, and the Yale University School of Music. And she’ll feature several Sphinx Laureates as well. 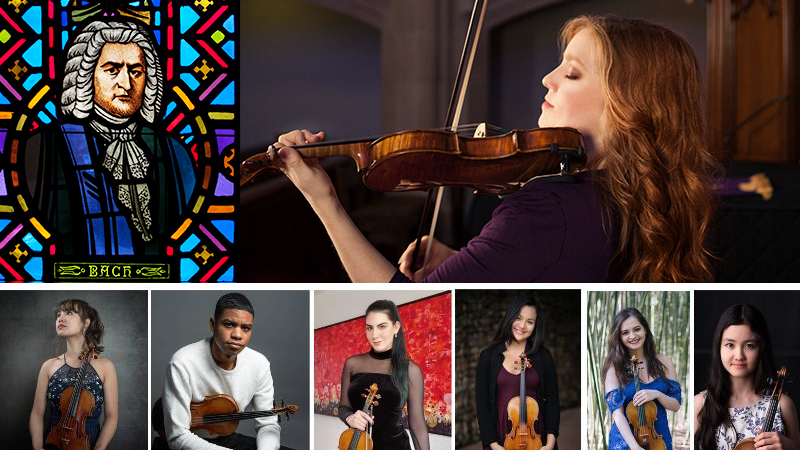 Rachel is certainly no stranger to Bach. At the tender age of 17, she became the youngest person to win the Gold Medal at the Bach International Violin Competition in Leipzig, Germany, and the first American to do so. She clearly knows her way around the myriad technical challenges inherent in this masterwork. And I, for one, can’t wait to hear what she has to offer.

During the first episode, Rachel digs into Partita No. 1 in B minor, with the following young artists:

The cost* is $15 per show or $60 for the entire six-part series. (Episodes will be available on demand directly following.) And for those who might be reluctant to spend money on a virtual event, revenues from the masterclass series will benefit the not-for-profit Rachel Barton Pine (RBP) Foundation, which assists young artists through its Instrument Loan Program and Grants for Education and Career and also runs Music by Black Composers (MBC), which works to rectify historic and ongoing racial injustices in the classical music sphere.

Here is the complete calendar for the six-part series:

* Free entry is offered to all Sphinx Laureates and participants in the Sphinx Performance Academy, as well as to the young performers playing in the masterclasses.

March 7, 2021 at 02:14 AM · Oh my! A different violin concerto for 24 weeks!!!! There are no words for that! After reading your article I decided to go to youtube to hear Rachel play and boy was I pleasantly surprised! The first video I saw was: Brahms Violin Concerto Excerpt from Episode 7 of "24 in 24: Concertos from the Inside with RBP". I think I've mentioned before in a comment in one of your articles that Brahms is my favorite Violin Concerto hands down ever since I was a little boy and heard it played by a young wonderful violinist, Paul Rosenthal, who happened to be the son of friends of my parents. I was mesmerized. While listening to Rachel talk about Brahms, I bonded with her immediately when she mentioned that if she knew she was going to die in one hour and could only play one last concerto, which would it be? And with no question, she would pick the Brahms! She is and will always be my friend! Little did I know that I was in store for such a wonderful masterclass in Brahms! I loved every minute starting with her wonderful notes about bowing to her marvelous sense of humor (WWJD - what would Joachim do?) and I was totally out of breath by the end of the half hour! So yes, she did tackle the Brahms and I look forward to listening to other episodes to see how she tackles the other 23! Next I will listen to the episode on Mendelssohn, also one of my favorites from the time I played the first movement of the piano reduction of the orchestra in high school with my then girlfriend who was a wonderful violinist.

Oh - I must mention that her outfit in that video is noteworthy!

Thank you Diana for this marvelous introduction to Rachel Barton Pine!

March 7, 2021 at 04:09 AM · Joe, Thanks for your wonderful comment! I had no idea Rachel's "final" concerto would be Brahms! How lovely! And WWJD is just great. Thanks so much, as always, for reading and taking such an in-depth interest! And as for "noteworthy" attire, Rachel wore a beautiful dress decorated with musical notes on one of the broadcasts I watched (Mendelssohn, I believe).