August 11, 2020, 5:26 AM · After compiling 17 issues of "Week in Hope-Inspiring Music Online" and "Week in Review: Summer of Change," it’s time for me to step away from this incredible listening and writing opportunity to focus on other projects. In pondering the last 17 weeks, I find much to be grateful for in terms of what the pandemic has imposed on my musical knowledge, listening habits, and overall musical appreciation. 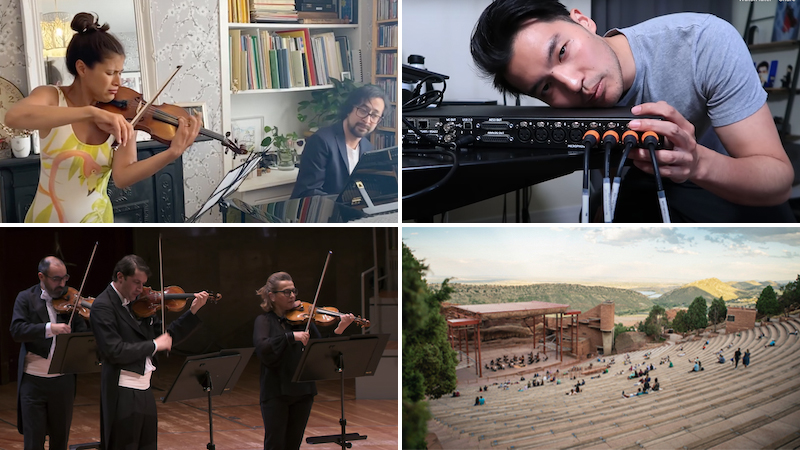 I've had a chance to hear the virtuosity of the musicians who populate our great orchestras. I've gained exposure to composers I had not listened to previously. I've discovered new artists who have quickly been added to my list of favorites. And I've been inspired by the never-say-die spirit of amateur and professional musicians around the globe in their herculean efforts to keep music alive.

My sincere thanks go to those who have faithfully read this weekly roundup over the past four months. I am proud to be part of the violinist.com community. In fact, I’m not sure how I would have survived quarantine without this optimistic group of string players and violin lovers who always elevate my spirits. My hope is that hearing the glorious music featured in this column has brought you solace, joy, and inspiration. (And, if I’ve thrown in a little too much Elgar along the way, all I can say is, you’re welcome.)

We all know that Noah Bendix-Balgley is an incredible concertmaster. (He got the Berlin job, after all.) With neither conductor nor audience in sight, and in a socially-distanced configuration, watch him masterfully showcase the incredible talent that lies within the Berliner Philharmoniker as they play the final Allegro of J.S. Bach’s Brandenburg Concerto No. 3 in G major. If you ever wondered about the chops of these orchestral players, wonder no more. (Don’t miss the tutti celli at 0:15, the solo contrabass at 1:06, and the solo viola at 1:43.)

Violinist Elena Urioste and pianist/husband Tom Poster left an indelible mark on virtual music by posting a new tune (often in full costume) for 88 straight days during the pandemic. After taking a bit of a break to "laze in the garden, cook, tackle some home improvement projects, obsess over our houseplant babies, and drum up some new musical plans," they bring us a poignant gem: Adoration by Florence Price. (In a very sweet note, Elena assures us that after months in lockdown, she and Tom can confirm that they truly do adore each other… something I believe is quite apparent throughout this beautiful duet.)

Thanks to the pandemic, I now know what violinist Ray Chen eats for breakfast. And I know why he finally feels he’s "become an adult." (Spoiler alert: cable management.) His highly-entertaining vlog highlights his journey to recording and releasing a professional album from the privacy of his own living room. (I found it fascinating to hear Chen’s down-under accent become more evident as he became increasingly comfortable with the recording process.)

The Boulder Bach Festival has been providing solace concerts and educational videos throughout the pandemic. As if that weren’t enough, they launched the World Bach Competition and opened up categories from high school through professional levels in a variety of instrumental and vocal categories. With over 300,000 views in just a few days, the panel of judges will ultimately award cash prizes and viewers will get to vote on audience favorites. Zachary  Carrettín, the festival’s music director, says one of the most inspiring aspects of the competition has been "reading the positive comments participants are leaving on the videos of their competitors." Here is one entry in the high school division, Sophie Chung of China, who gives you a glimpse of the quality of the competition. (What poise this young violinist displays in the 14-minute-plus J.S. Bach Chaconne… matching socks and all!)

Early on in the pandemic, violinist Doori Na took a stand that he was going to familiarize himself with the music of minority composers. You need only visit his fan page or YouTube channel to realize he took this challenge seriously, playing works by Samuel Coleridge-Taylor, Adolphus Hailstork, Coleridge-Taylor Perkinson, Asaf Zeynally, Jessie Montgomery, and more. I’ve featured Doori many times in this column and he continues to not only inspire me with his artistry, but he learns new pieces every few days. In this selection, pianist Sean Kennard joins Doori in Granadina from Chants d'Espagne (Songs from Spain) by Cuban composer, Joaquín Nin. (Love all the left-hand pizz! Well, just to clarify, I love it when someone else is doing it.)

Acoustic on the Rocks

When the Colorado Symphony announced Acoustic on the Rocks, a one-week series at the spectacular Red Rocks Park & Ampitheatre, it quickly sold out. The idea was to feature 20 string players, led by Resident Conductor Christopher Dragon, performing works by Mozart, Tchaikovsky, and Walker. The concert would be repeated five times, with 175 tickets available for each concert (which represents less than 2% of the venue’s capacity). Back by popular demand, the string concert will be repeated five more times and the series will also add five concerts for brass and percussion. (While we don’t have video available, here are a few photos of the socially-distanced and masked string orchestra, as well as the socially-distanced audience.) 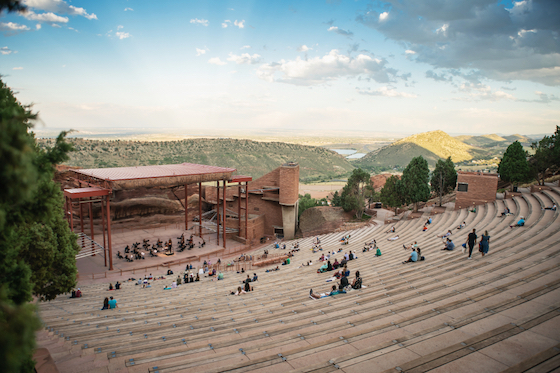 Acoustic on the Rocks with members of the Colorado Symphony, at Red Rocks, Colorado. Photo by Amanda Tipton. 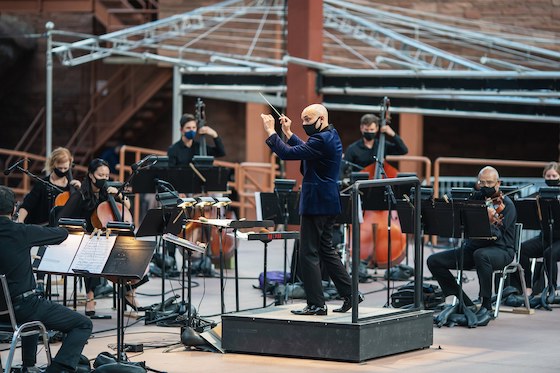 Conductor Christopher Dragon with members of the Colorado Symphony.

With large-scale concerts and symphony performances almost universally on hiatus, our weekly roundup has switched focus from concert reviews to the many different ways that artists, orchestras and educational institutions are continuing to keep the music going. If you’d like to share links of socially-distanced performances, new performance videos, teaching experiences, camps, or master classes you’ve enjoyed, please do so in the comments or email Laurie for possible inclusion in a later opus.

August 11, 2020 at 05:14 PM · Thank you for doing this feature during this very unique "Summer of Change," Diana. You've added such a thoughtful and delightful personal touch and I've really appreciated it - I think we all have!

Meanwhile, everyone, I'll be back writing the Week in Review next week, so please email me your ideas!

August 11, 2020 at 06:54 PM · Adoration was beautiful and obviously performed from the heart. How lucky they are to have each other.

I loved Chen's vlog. What a great sense of humor he has. And btw, I've loved your sense of humor (left-handed pizz when someone else is doing it) and so much more throughout the previous weeks.

Thank you Diana for 17 wonderful weeks of music. You have enlarged my musical world tremendously and I've looked forward to Tuesdays and the Week in Review which has been the highlight of my day. Now I look forward to reading Laurie's Week in Review.

August 11, 2020 at 10:40 PM · Laurie: I thank you for the opportunity you've given me to step in on this exciting project. It's been a wonderful 17 weeks. You've given so many of us an incredible opportunity to write about music and express ourselves, and that is truly remarkable. So, again, thank you.

Joe: I believe you have commented on my articles each week, and always in such a thoughtful and enthusiastic manner. The clips you particularly enjoy seem to always be the ones that are special to me. I'm so glad we've been able to share the past 17 weeks together through this music. And, trust me, Laurie will bring a new and magical perspective, (if not, perhaps, a little less Elgar).

August 12, 2020 at 12:26 PM · Diana, thank you for being our advance scout and finding all these amazing players and their inspiring performances. And I so appreciate that you have taken this moment when we are all so isolated, and helped us see that we are not alone in our struggle to use our art to make the world a better place and heal the wounds our brothers and sisters suffer daily. I’m sure whatever projects you take on will be equally thoughtful and important. We all wish you well.

August 12, 2020 at 01:04 PM · Thank you for the inspiring collections of music you have brought to us this summer, Diana! Seeing the resilience and creativity of fellow musicians during Covid has lifted my heart. This final collection is beautiful. The pictures of red rocks amphitheater have me a lump in my throat and made me miss Colorado. Thanks for including those.

August 12, 2020 at 06:40 PM · Teresa: I want to thank you for all the wonderful clips you sent in: Yale, NYC Ballet, Norwalk Symphony, and more. I also want to thank you as someone on the front line who is doing everything imaginable to keep residents in five nursing home safe and well. (And, thanks for being the best big sister ever.)

David: What an incredibly kind comment! Thank you so much and best of luck with your Celtic cello adventures. It was a pleasure to feature you and Joyce in one of the earlier roundups.

Christina: Also a native of Colorado, the Red Rocks photos made me very emotional. Thank you for being such a loyal and enthusiastic reader throughout the pandemic. And thank you for allowing me to feature your wonderful video on Boulanger in an earlier issue!