My Weekends with the Miró Quartet

July 30, 2020, 9:46 AM · Recently, an arts administrator used two words to describe the way regular concert-goers currently feel. Culturally parched. I certainly felt that way when I purchased a season pass for the Miró Quartet’s live stream of Beethoven’s string quartet cycle. Thanks to the never-say-die attitude of the Orcas Island Chamber Music Festival, many of us lucky listeners have spent the past two weekends with this famous foursome: violinists Daniel Ching and William Fedkenheuer, violist John Largess, and cellist Joshua Gindele. Not only has this experience given me an entirely new perspective on the merits of live streaming, it’s begun to quench my musical thirst. 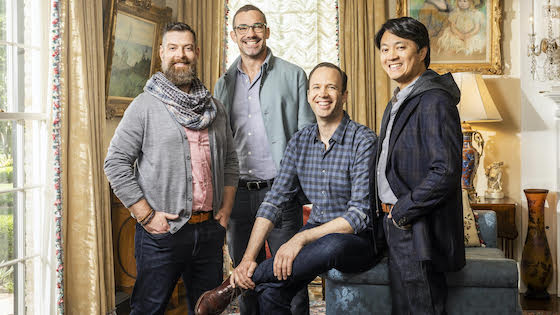 We’re now halfway through the Beethoven cycle and I’m hoping some of you will join me for the remaining middle-to-late quartets. I've found it to be a way to hear a wonderful quartet, and the experience has both allowed me to immerse myself in Beethoven, and to join a terrific community of listeners all over the globe. (The remaining schedule and registration information is included at the end of this article. Concerts are Thursday, Friday, and Saturday evenings.)

Throughout the pandemic, I’ve attended events on Facebook Live and YouTube, both with mixed results. I’ll admit, this is the first live stream I’ve actually paid to attend. And if paying means this dramatic a jump in the technological quality, it is well worth the price.

A trademark of the Miró is being able to hear each voice clearly and distinctly. There’s never a tug-of-war for your ears’ attention. If the cellist is playing pizzicato triple piano, you can hear him. If the viola line is of major import, everyone else backs off. I wondered how the quartet’s incredible musical graciousness would translate through a screen. And, I wondered, at the end of the concert would I simply feel alone in front of my computer screen or would I feel I had been a part of something special?

Throughout the series to date, the audio and video have been exemplary. The sound was as if I were listening in a venue with perfect acoustics. The visuals were better than live, because I had a clear vantage point to watch each player, something I would never be able to see so clearly in a traditional hall. The “chat” allowed me to connect with people who were watching from all over the world. I truly felt a part of something exciting and invigorating. It was a live performance, after all.

When the violist began the final movement of Opus 59, #3, for example, my first thought was, "How does anyone play that fast?" My second thought was, "Is there a train wreck coming?" I looked at the three other faces in the group to see if they were registering horror as they anticipated their entrances in the fugue, but they seemed eerily calm. Was it possible this was the agreed-upon tempo? Evidently, yes, as indicated in the clip below of the final 30 seconds of this exciting movement. And please see my Author's Note below.

He had me at Wizard of Oz

When told I could speak with a member of the Miró Quartet about the second half of their Beethoven cycle, my choice was an absolute no-brainer. Why, the second violinist, of course! And it’s not just because that is personally my favorite seat in any ensemble. It’s because William Fedkenheuer, the esteemed second violinist in the Miró, captivated me not only with his playing, but also with the way he speaks about the music. Another plus of the live stream is that we hear one of the Fab Four speak before the music begins and multiple players take questions at the end.

When introducing Opus 59, #3, Will says it reminds him of the great line from the iconic "Oz" movie when Dorothy says, "Toto, I have a feeling we’re not in Kansas anymore." When listening to the quartet navigate this complex, gorgeous, and, at times, completely “un-Beethoven” quartet, I knew exactly what Will meant. What a musical journey! Will promised that by the end, another of Dorothy’s lines would resonate… that being: "We must be over the rainbow." And, were we ever! (Oh, and Will says this particular quartet includes one of the most “infamous second violin solos in the repertoire.")

Like many performers, Will says the group’s last live performance was March 10. They returned to their home base of Austin, Texas for spring break with the kids, but quickly realized they wouldn’t be going anywhere for at least the remainder of the summer. After sheltering-in-place with their respective families, they started rehearsing together on June 8 in anticipation of the live stream. Thanks to a direct and honest group culture, they were able to establish protocols and boundaries to keep everyone safe, while creating a detailed rehearsal plan for the marathon 16-quartet series.

I had to ask Will about the Miró’s seating arrangement, which varies from what I thought was the "traditional" formation. In these performances, the first and second violins are seated across from one another; the cellist is to the left of the first violin and the violist is to the right of the second violin.

Will says this formation stemmed out of a rehearsal about five years ago. Evidently, the quartet often switches seating "in order to relate differently to each other and to better understand the challenges of each voice." At that time, they were dealing with a few issues and decided to see if this configuration helped. They tried this seating arrangement for one concert, then decided to try it for a month, then six months. Will says, "That was a scary pivot point, as we had important concerts looming. But we did it, it worked, and, for the most part, we’ve never gone back."

In an interesting twist, following a concert at Oberlin, the college’s librarian revealed that she had just gotten a copy of "string quartets of the 1800s," basically a Wikipedia 19th century quartet information. The book included drawings, and, surprisingly, most of the quartets were sitting in the configuration the Miró uses today.

Join me for the remainder of the series…

A schedule for the series is listed below and all concerts begin at 5:30 p.m. PT (6:30 p.m. MT, 7:30 p.m. CT, 8:30 p.m. ET). Tickets are available at OurConcerts.live and are $20 for individual concerts and $120 for a complete series pass. Following each livestream, the performance will remain online for on-demand viewing for 24 hours for ticket holders. If you buy the season pass, you have unlimited access to all the concerts online, which means you can go back and hear any that you missed. (In previous weeks, Opus 18 and Opus 59 have been performed.)

FROM MIDDLE TO LATE PERIOD

Author’s note: While there is the slightest delay in the YouTube clip included in this article, that is a YouTube issue. There were no delay or sync issues in the live stream.

July 30, 2020 at 04:58 PM · You’re so right about how our thirst is now being quenched with live streamed music. The new norm. We’re getting used to it. Do I miss the old norm? Oh yes! But I am so thankful that so much is available to us online. And I’m so thankful for the major technical advances that have been made in such a short time. There are pros and cons of everything and thankfully so many pros in this case.

I loved the expressions on the faces of the Miró Quartet when they were done. They were obviously over the rainbow! While listening, I wasn't in Kansas anymore either! And it was fascinating to read about their seating arrangement. I’m going to check the seating arrangement of other quartets as soon as post this. Thanks for this!

July 31, 2020 at 04:40 PM · Joe: The quartet really did look over the rainbow! Thanks for a wonderful comment. I, too, long for when live performances come back. But for now, this Beethoven cycle has been a welcome relief!