July 23, 2020, 9:07 AM · "I have come to believe that a great teacher is a great artist, and that there are as few as there are any other great artists. Teaching might even be the greatest of the arts since the medium is the human mind and spirit." John Steinbeck 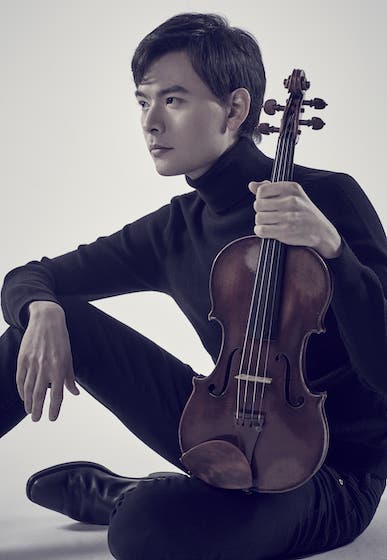 Violinist Stefan Jackiw.
There is a lovely moment at the end of Stefan Jackiw’s* riveting performance of Max Bruch’s "Scottish Fantasy" with the Orquesta Sinfónica de Galicia. In the European tradition, Stefan is presented with a bouquet of flowers during the concert’s ovation. Without missing a beat, he hands the bouquet to the harpist, his ally in Bruch’s musical tour de force. This innocent gesture is in keeping with the obvious generosity and collaborative spirit of this young artist — a man who says his most rewarding orchestral experiences are when he feels as if he’s the first violinist in a quartet, rather than a soloist in front of a symphony.

I spoke with Stefan for less than an hour, and yet in that short time the phrases that came up repeatedly were collaborations with friends, listening to each other, working together, learning from mentors, giving back. It is through this organic and natural desire to share his insights, Stefan’s latest brainchild was born: Stefan’s Sessions — his brand-new online academy — which will be offered free via Zoom.

Not your father’s masterclass

Stefan’s Sessions will certainly not be your father’s masterclass. In fact, I’ve scoured the promotional materials and I can’t find the word "masterclass" anywhere. The "sessions" are, in actuality, musical explorations. They’re designed for those who want to dig into masterpieces of the violin repertoire, as well as those who just desire a better understanding of how to study a score and prepare a piece. As Stefan said, "All the ingredients are in the score. Composers leave us breadcrumb trails. It’s up to us to follow the clues. That’s how we marry our musical research with our own unique musical personalities."

Rather than jumping from composer to composer across the musical timeline, in each monthly episode Stefan will take participants on "a deep dive into one masterpiece of the violin repertoire." The first three episodes will be devoted to the concerti of Tchaikovsky, Sibelius, and Mendelssohn. A different violinist will perform each movement. "My hope," Stefan said, "is that a student who is learning these pieces will come away with a starter pack for how to approach the work, both musically and technically."

Violinists who wish to apply as a performer and individuals who want to watch via Zoom (and ask questions during the Q&A) will find application and registration information here. There is no charge for performers or audience members. The first session, August 8, will focus on the Tchaikovsky Violin Concerto. (Registered participants will receive specific starting time and log-in information.)

It all starts with the music

Stefan’s approach to working with students probably won’t include phrases such as "do it like this" or "crescendo on the C sharp." He’s not interested in a teaching style "that is specific to one note or phrase" while losing the entirety of the piece, he said. He views technique as "a tool to express whatever you’re trying to express musically." He likens his approach to the old proverb: Give a man a fish and he eats for a day. Teach a man to fish and he eats for a lifetime. He’s much more interested in the musical equivalent of teaching violinists to fish.

To look at Stefan, one might think he should be a student in his own class. But don’t mistake his youthful appearance for a lack of experience. He’s performed as soloist with the orchestras of Boston, Chicago, Cleveland, New York, Philadelphia, and San Francisco, among many others. (He was scheduled to make his LA Phil debut at the Hollywood Bowl this summer playing Beethoven’s Violin Concerto.) He’s recorded the Ives Sonatas with pianist Jeremy Denk. And he performs regularly with pianist Conrad Tao and cellist Jay Campbell as part of the Junction Trio. (He said that some of his best musical experiences stem from his participation in chamber music, repertoire he feels lends itself to "really listening.")

Stefan said that chamber music is also a forum in which you often play with people you love and admire. I can only guess he’s referring to his new bride, clarinetist Yoonah Kim. (The courageous couple married last month in a Central Park wedding, where they were joined in person by mask-wearing friends and virtually by family members via Zoom.) A seemingly magical moment for the couple was, fittingly, a Valentine’s Day performance of Charles Ives’ "Largo for Violin, Clarinet, and Piano," complete with hearts on the piano, red ribbons in Ms. Kim’s hair, and a red bow around the scroll of Stefan’s 1750 G.B. Guadagnini.

If it seems out of character for Stefan to teach, look no farther than his parents. Both acclaimed physicists, Stefan’s German-born* father is Professor Emeritus at M.I.T., while his Korean-born mother is a Professor at Boston University. They placed a premium on Stefan’s academic studies and also started him on violin at age 4. Like many violinists, Stefan’s early musical training primarily took the form of private lessons, including studies that began in his final year of high school with famed violinist Donald Weilerstein.

When it came time for college, Stefan toyed with the idea of a conservatory. But, the academic route was more to his liking. As he said, "It felt like a familiar path." So he picked a spot in Boston between his parents’ two workplaces: Harvard University.

Stefan managed to get the best of the academic and conservatory worlds. While earning a degree in Musicology at Harvard, he continued his studies with Weilerstein at the New England Conservatory (NEC), simultaneously receiving an Artist’s Diploma from NEC. (The joint degree currently offered between these institutions did not exist in Stefan’s day.)

Stefan’s musical perspective shifted dramatically at Harvard, he said, when he had the opportunity to take a chamber music class with the brilliant pianist and musical thinker, Robert Levin. "I went from focusing only on the repertoire I was studying, to delving into pieces I didn’t know," Stefan said. "Students had the opportunity to take Levin’s course multiple times, and I think I took it six semesters out of eight."

Levin’s class just may have been an inspiration for Stefan’s Sessions, as it was also a deep dive into repertoire. Stefan said that years later he realized that he had a "roadmap" for how to think about various pieces. As his career blossomed, it’s become a personal mission to provide a similar opportunity for other violinists.

Much praise has been heaped upon Stefan by the critics, and deservedly so. But the phrase I think might make him most proud was issued by The Financial Times, who wrote that Stefan is "selflessly musical." If those words mean that Stefan makes his performing ego take a back seat to the musical requirements of a given piece, then I say that is the greatest praise an artist can receive.

Harkening back to Stefan’s performance of the "Scottish Fantasy," as I watched the almost-balletic dance between Stefan and the winds in the Andante Sostenuto (below), I realized that real listening is truly contagious. No one is leading, no one is following, they are simply together — that glorious "thing" that happens when breathing, stopping, starting, slowing down, are felt as one. You can see that Stefan is truly listening, and the orchestra responds in kind.

Stefan is willing to hold back his sonorous tone and deliver a true pianissimo. He is willing to offer isolated phrases that are not "beautiful" in the obvious sense of the word, but are seemingly exactly what the composer wanted. He is willing to not only turn a phrase over to an orchestral musician, but to graciously play a secondary role. He is not there to show us what he can do, but what the composer (and the music) are offering us. It sounds utterly simple. And yet, I believe, impossibly rare. Unselfish performing.

There are myriad virtues music must fulfill and Stefan is more than willing to delve into all of them. And when doing so, I dare say that in addition to finding beauty (a virtue he possesses in abundance), he helps his audience discover something equally moving and mesmerizing. If he brings even a fraction of this perspective to his sessions, they will be more than worth the time spent.

*Stefan Jackiw’s father was born in an area that was then considered Germany, now considered Poland. He is of Ukrainian background, hence the surname, which is pronounced jacques-eev.

July 23, 2020 at 09:29 PM · You had me at the first paragraph. In high school I wrote a paper on John Steinbeck and loved his books. I was also a teacher for many years and loved it as there was so much I could give. So yes, teaching is a great art!

I'm very familiar with Bruch's Violin Concertos but not with the Scottish Fantasy so thank you for introducing that to me. And as Stefan said, composers certainly leave us breadcrumb trails in the score. Puccini left us the whole loaf especially in Tosca.

Thanks for the full story of Stefan's background. Coincidentally, I knew Robert Levin who Stefan studied with. We both went to Andrew Jackson HS together and although he is a little older than I am, I remember his marvelous musical talents very well from the years we were both there together.

I loved watching the cellist to Stefan's right in the back row in the close-ups. You could see that he was in heaven the whole time especially during the Andante Sostenuto section. Isn't that what it's all about!

I've learned so much from your articles. Thank you so much! The way you described "unselfish performing" is so eloquent as is everything else you write. I applied to Stefan's Sessions as an audience member and look forward to it very much! I've shared this article on social media and will spread the word about the Sessions.

July 25, 2020 at 12:36 AM · As someone who spends much of his time in a public classroom setting, I heartily applaud Stefan Jackiw for his willingness to share his love of the instrument and his musical knowledge. In a time when negativity seems to flourish, opportunities, such as the ones the esteemed Mr. Jackiw are providing, are like rays of sunlight which give direction and focus to musicians who might otherwise find themselves alone and depressed. An online academy is a mighty task to tackle, but when you consider how little online material there truly is for musicians (as compared to “core curricula”), it makes his efforts have even more relevance. Simply Brilliant - indeed likened to his playing.

David: I have such incredible respect for teachers, especially during this time of upheaval. Thank you! I agree that the online academy Stefan is offering will be a great addition to anyone's education.

July 25, 2020 at 03:12 PM · What a talent!! Someone who is that good just doesn't seem human. To be able to combine technical ability with the ability to interpret the music in such a meaningful way, is the mark of a true artist. And to put aside one's ego in the pursuit of musical excellence is an even more remarkable attribute. Kudos to Mr. Jackiw. And you to for this wonderful piece that brought his musical excellence and character to life.