July 21, 2020, 11:22 AM · One of the birthday cards my beloved father received on his 90th birthday this past Sunday included a quote by Leonard Bernstein: "The key to the mystery of a great artist is that for reasons unknown, he will give away his energies and his life just to make sure that one note follows another…and leaves us with the feeling that something is right in the world." Day after day throughout this pandemic, musicians across the globe have proven that music will go on — one note following the next. I am heartened and inspired by the artists featured here this week, as I have been heartened and inspired over the past four months. My hope is you find something in this roundup that speaks to you personally and brings you joy. 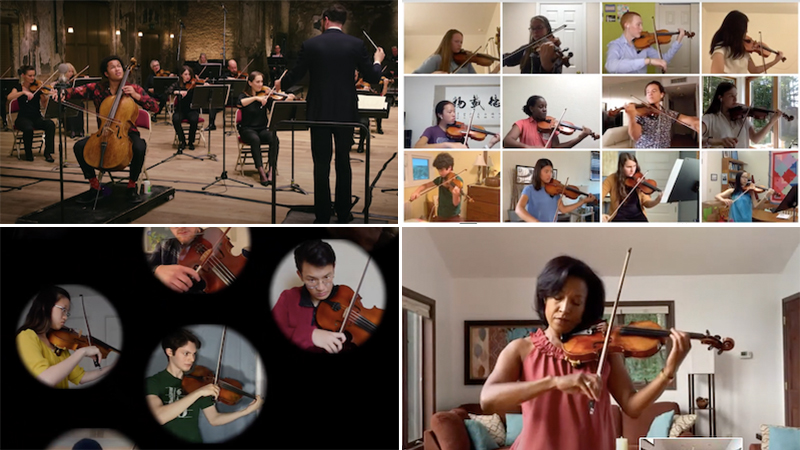 Behind-the-scenes of socially-distanced performing
In a slight departure from our usual format, I wanted to draw your attention to members of London’s Philharmonia Orchestra, stage management, and production crew who discuss the challenges of socially-distanced performing and the joys of being together again. (This leads directly to our next clip, below, of the performance being discussed.)

Sheku performs Saint-Saëns
Cellist Sheku Kanneh-Mason, conductor John Wilson, and the Philharmonia Orchestra bring us Camille Saint-Saëns’ Cello Concerto No. 1, in partnership with Classic FM. The magnificent Battersea Arts Centre provides an atmospheric backdrop for this socially-distanced performance. Despite the fact the winds and brass are about a block away from the podium, the coordination is quite simply amazing. (Scroll to 28:47 for Vaughan Williams' Fantasia on a Theme by Thomas Tallis, in which the strings are arranged into two mini-orchestras and a string quartet.)

Interlochen continues 93-year tradition
Continuing a 93-year tradition, Interlochen Arts Camp ended its season with a performance of Franz Liszt’s "Les Préludes," albeit a virtual one. Over 400 performers in 21 countries on five continents participated. It begins with a montage of archival photos and footage before segueing to this year’s performers, conducted by Cristian Macelaru. (Don’t miss the traditional breaking of the baton at the end, or what is called "The crack that ends everything that starts so much.")

Kelly Hall-Tompkins stuns as the fiddler
The happiest hour of violin music on the Internet has now been dubbed the "No Fret Zone!" Gil Shaham and Laurie Niles prove once again that Gilharmonic on violinist.com might just be the antidote to stress. This week’s celebrity guest was violinist Kelly Hall-Tompkins, who delivered a stunning performance of an ingenious arrangement of tunes from Fiddler on the Roof, which she commissioned and recorded, titled The Fiddler Expanding Tradition. (Kelly was the Broadway show’s star fiddler in over 400 performances)

Yale Symphony Orchestra and its orbiting spheres
In an ironic twist, the Yale Symphony Orchestra performs Missy Mazzoli’s "Sinfonia (for Orbiting Spheres)" which works quite remarkably in this virtual performance. Conductor William Boughton noted, "The work's title took on new meaning to us, as the orchestra migrated from being a congregation of musicians that performed together to more disparate and isolated individuals, still related to one another through art, but no longer together." (Bravo, Yale!)

Aspen, Ehnes, and Beethoven
As part of the Aspen Music Festival’s series of virtual performances, violinist James Ehnes and pianist Andrew Armstrong performed Beethoven’s Sonata No. 1 in D major and Sonata No. 5 "Spring." The artists inserted the Adagio from Violin Sonata No. 6 in A major between the other two works. According to critic Harvey Steinman’s review, "If audiences can’t share Harris Hall with these performers, they at least got a performance made specially for Aspen, with excellent sound, fluid camera work, and musicians that did everything they could to connect with a remote audience they could not see from Seattle’s Center for Chamber Music."

Other performances of note
Toronto Summer Music had to cancel its live festival (as well as its coached sessions for pre-professionals and for adult amateurs) this summer, but instead TSM is presenting a three-week free online festival. The festival began last Thursday with James Ehnes playing Beethoven sonatas. More information is available at Toronto Summer Music.

Summer of change ideas welcome
With large-scale concerts and symphony performances almost universally on hiatus, we've put "The Week in Reviews" on hold and instead bring you this roundup of "summer of change" activities. If you’d like to share links of socially-distanced performances, teaching experiences, camps, or master classes you’ve enjoyed, please do so in the comments or e-mail me for possible inclusion in a later opus.

July 21, 2020 at 08:33 PM · Well, the Philharmonia Sessions really got me! Listening to everyone talk about how wonderful it was to get back together to make music, I could only imagine how I'll feel the next time I'm able to say "Curtain Go!" and the orchestra plays the first note of whatever opera it may be. I can only imagine well before that how it will be hearing the first notes of the first rehearsal of that opera! Get out the tissues please. May it be as soon as possible.

The Saint-Saëns Cello Concerto was heaven to listen to and to watch. It pulled at my heartstrings and was the highlight of my week.

It was wonderful to see Brian on the timpani. The whole video was breathtaking and touching especially the segue from past years at Interlochen to 2020.

BTW, I love the expression "No Fret Zone". And I loved the Fiddler section especially since Lydia was in the Yiddish Fiddler in NY.

Thank you once again for making my day.

July 22, 2020 at 09:39 AM · Joe: I specifically put the behind-the-scenes Philharmonia clip in with you in mind! And I suspected you and Lydia would love the Fiddler clip! I'm absolutely delighted that you enjoyed the roundup!

July 24, 2020 at 06:05 PM · I must be living under a rock, because you keep on featuring these fabulous fiddlers whom I have never heard of, like Stefan Jackiw and Kelly Hall-Tompkins. Keep 'em coming!

And thanks for letting a cellist into the tent

July 24, 2020 at 07:35 PM · David: Cellists are always welcome in the tent! I think I've got another great one for next week! And I am discovering new fiddlers every day as well. If there has been a silver lining to isolation, it's that I'm getting caught up on YouTube performances and hearing new artists.

July 25, 2020 at 03:25 PM · The cello concerto was wonderful. I had never heard it before and to hear it for the first time with such a talented cellist was a real treat.

And the Yale piece was very moving. One of the most regrettable things about this coronavirus pandemic is the impact it has had on students. The college experience is not one that can be replicated later in life. Those are such formative years. I think back to all of the wonderful musical experiences that I had in college that I was not able to have later in life as I am not a professional musician. But those are the experiences that were instrumental in shaping the person that I am now. Playing in an orchestra or singing in a choir involves hard work and discipline. The end result of a beautiful performance relies on everyone putting aside their ego and working towards a common goal. That joy shared with others is an experience to be treasured. I feel for those students who have been deprived of some of those experiences during these past few difficult months. And I am so glad that they at least had the opportunity to try to capture this in a "virtual" way.

July 25, 2020 at 09:31 PM · Teresa: So glad you enjoyed the cello concerto! And since you are the one who let me know about the Yale clip, I send my thanks to you! I agree entirely with your comments about college musical experiences. I am hopeful that the virtual creation of the "spheres" was rewarding to these young players.