July 14, 2020, 10:43 AM · This week’s roundup features three superstars performing on their home turfs in London, Vienna, and Chicago. We’ve got New Jersey musicians paying tribute to a composer who spent much of his life in the Garden State. Don’t miss the viola section from Boston who magnificently take on one of the most iconic songs ever written. Oh, and for the first time since the pandemic began, we have an actual review of a live performance by one of the violin world’s biggest stars. Enjoy! 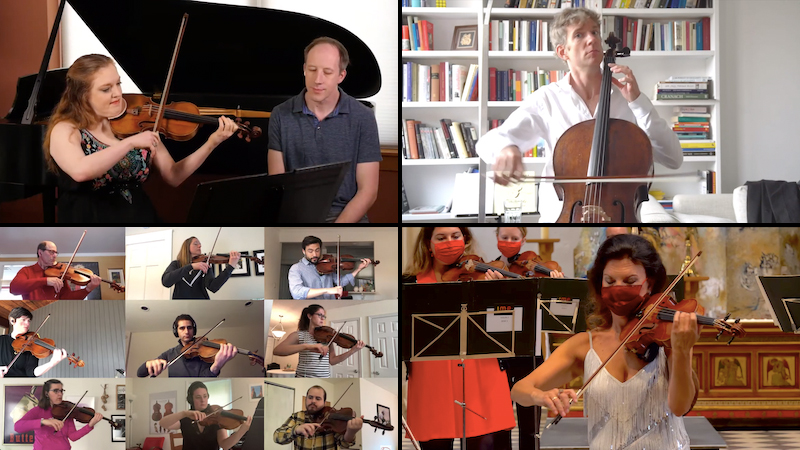 Several weeks ago, we heard the London Mozart Players in their first livestream, socially-distanced concert since the quarantine began, performing in London’s Westfield Mall. Their second livestream took place in London’s Church of St Giles, Cripplegate, led by violinist Ruth Rogers. For this concert, the ensemble was joined by violinist Tasmin Little OBE in remarkable performances of Ralph Vaughan Williams’ The Lark Ascending and Edward Elgar’s Salut d’Amour. (Scroll back to the beginning to hear Edvard Grieg’s Holberg Suite. After the Elgar, stay tuned for a rollocking rendition of Aaron Copland’s Hoedown.)

Somewhere over the rainbow times nine

Is there anything better than nine violists playing Somewhere Over the Rainbow? Wait, don’t answer that… until you hear this stunningly beautiful rendition by members of the Boston Symphony Orchestra’s viola section as part of its BSO at Home series. Violists Steven Ansell (Principal), Cathy Basrak (Assistant Principal), Danny Kim, Rebecca Gitter, Daniel Getz, Rebekah Edewards, Kathyrn Sievers, Mary Ferrillo, and Steven Laraia provide a rich, sonorous version of this beloved song. (Very sweet note at the end of the clip reads: "The viola section misses playing for you. Stay well.")

LA Phil at Home (in Vienna)

Next, we head to Vienna, where we’ll join cellist Johannes Moser in his living room (albeit, virtually). The famed soloist was scheduled to perform with the LA Phil in May, but that performance was, of course, cancelled. Despite the distance, Moser participated in the ongoing LA Phil: At Home series. Here are virtuostic excerpts from J.S. Bach’s Cello Suite No. 3 in C. (Is that a book about jazz I see on Mr. Moser’s bookshelf?)

New Jersey musicians salute one of their own

How fitting that New Jersey Symphony Orchestra violinists Bryan Hernandez-Luch and Fatima Aaziza, violist Elzbieta Weyman, and cellist Laura Andrade offer a performance of a piece by a composer who lived much of his life in Montclair, NJ. Composer and pianist George Walker (1922-2018) was the first African American to win the Pulitzer Prize for Music for his 1996 work, Lilacs. Dr. Walker’s life was filled with many "firsts." First black instrumentalist to perform in New York’s Town Hall. First black instrumentalist to perform with the Philadelphia Orchestra (Rachmoninoff’s 3rd Piano Concerto with Ormandy conducting). First black instrumentalist to be signed by a major arts management. First black recipient of a doctoral degree from Eastman School of Music. Walker’s String Quartet No. 1, second movement, was arranged for string orchestra and later titled Lyric for Strings. (This piece is one of the most frequently performed orchestral works by an American composer.)

If Gil Shaham is known as the "happiest violinist in the world" (see the review that follows), then Rachel Barton Pine might just be known as the "most family friendly violinist in the universe." Collaborations with her adorable daughter are simply a joy to watch. Now, we have one with her husband, Greg, which is equally enjoyable. Every Friday, Rachel brings us Family Fridays with RBP. In this episode, Rachel and Greg (as narrator) collaborate on Alan Rideout's musical retelling of Ferdinand the Bull. Oh, to have a little one in the house again to watch with me! But don’t miss this, regardless of your age or whether there are kids at home right now. It’s a tour de force for RBP, Greg provides perfect narration, and the story could not be more relevant. (Rachel mentions there’s at least one violinist out there who does the narration and the playing!)

David Noel Edwards of the Berkshire Edge summed up Gil Shaham perfectly: "The reason Shaham is known as the happiest violinist in the world is that he smiles onstage more than any other violinist in the world, even during the trickiest of passages. But 'smile' really isn’t the best word. Imagine the grin on a 10-year-old prodigy’s face when he steps onstage for the first time in front of a major orchestra. That is the kind of glee Gil Shaham radiates every time he performs." Instead of the Mendelssohn Violin Concerto Mr. Shaham was scheduled to play at Tanglewood this summer, he recently offered up a live stream from Studio E at Tanglewood’s Linde Center for Music and Learning. While we don’t have access to the performance, we finally have an actual review to share. The program included works for solo violin: J.S. Bach’s Partita No. 3 in E, Sergei Prokofiev’s Sonata in D, Max Raimi’s Anger Management, Scott Wheeler’s Isolation Rag, and sections of William Bolcom’s Suite No. 2.

July 14, 2020 at 07:15 PM · Thanks Diana for bringing such wonderful Performances to us weekly. I love reading your articles and appreciate you sharing your insight with us all.

July 14, 2020 at 08:08 PM · London Mozart Players and Ms. Little - simply superb. The only missing from the Hoedown were the horses. You know that they bring them in down the center aisle of the churches in Siena, Italy the night before the Palio twice each year!

July 15, 2020 at 12:14 PM · Tasmin Little gets the most beautiful sound and the London Mozart Players are incredible. Also it’s nice to hear Moser play Bach. Gorgeous.

July 15, 2020 at 06:55 PM · Everything in this week's review was marvelous! Thank you. I loved the London Mozart Players again! But seeing the empty church left me with an empty feeling. The Lark Ascending actually made me feel aloft especially at the end.

Somewhere Over The Rainbow was this week's pièce de résistance for me. My daughter Melanie played Dorothy years ago and has sung that song ever since. And what a beautiful sound with violas! I wanted more.

By the way, I love how you check out what's on people's shelves behind them. This is not the first time! Looking forward to next week as usual!

Joe: I'm all about the bookshelves!! So glad you enjoyed the roundup. And I agree that the viola version of "Somewhere" was just about as beautiful as it gets!

July 15, 2020 at 09:30 PM · Thank you for pointing out the sweet message at the end of Somewhere Over the Rainbow. My son Wyatt loves this one, as he is learning viola. Thanks for another wonderful opus, Diana. What a gift. ~Christina

July 15, 2020 at 11:30 PM · Christina: You are most welcome!!! I actually put RBP's "Ferdinand the Bull" in for your boys, but who knew that Wyatt would gravitate to "Somewhere Over the Rainbow!" He will be joining a wonderful group of instrumentalists; I've always felt violists are some of the kindest people in the orchestral family. Thanks for being a loyal follower!

July 16, 2020 at 11:28 AM · I loved RBP and Greg! What a wonderful offering for their daughter and for so many other young people--well, and for those of us who will never be too old for stories well told.