June 30, 2020, 11:43 AM · Midst the backdrop of seeming chaos, I find myself looking for inspiration. And I know I’m not alone. I can’t imagine a time in the history of the performing arts that musicians and music producers have faced greater challenges. At the start of the pandemic, the focus was on staying connected and having our musical voices heard. We’re now plagued with the question of not just when performance practices will return to normal, but if they will.

Yet I feel hopeful. And my hope stems not from grand acts or flamboyant gestures. Rather, it stems from individuals who have simply stood up and said, "Here’s what I can do now." "Here’s something I can try." "Here’s a new way I can look at things." 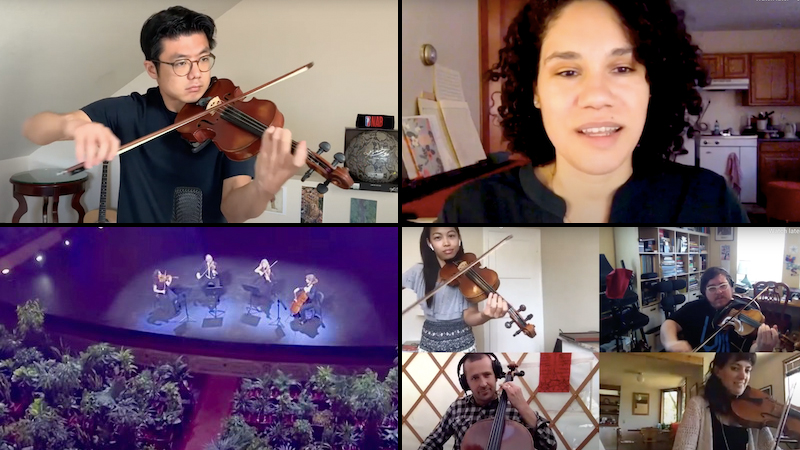 In that spirit, I bring you an opus of "Summer of Change" that may feel slightly different from those that preceded it. And that’s possibly because my personal state of mind continues to bob-and-weave through the maze of obstacles placed in our performing paths. I am reminded, more than ever, of one of my favorite passages by E.E. Cummings, who wrote, Miracles are to come. With you I leave a remembrance of miracles: they are somebody who can love and who shall be continually reborn, a human being; somebody who said to those near him, when his fingers would not hold a brush, "tie it to my hand."

I have found artists who are metaphorically saying, "Tie the brush to my hand. This pandemic will not be the end of my musical expression." I proudly present a few of these inspiring souls.

My personal inspiration began a few days ago with an innocuous email from a 29-year-old violinist named Doori Na. Doori sent a link to his weekly YouTube/Facebook show, Laid Bach Concerts, which he dubs "a relaxed and casual environment for classical music." I tuned in expecting the usual fare, but quickly learned it would be anything but. Polite, soft-spoken, unassuming Doori let us know that he was going to try to change classical music.

His manifesto goes something like this: I am a life-long classical musician who has been unaware of great music by minority composers. Some of this is not my fault, but some of it is. From this moment forward, I am diving into a new world of composition that I know very little about. I plan to learn as much about minority composers as I have about the great European masters. And I am committed to sharing this knowledge with my community and audiences.

Okay, then. You’ve caught my attention. Doori was to play Rhapsodie No. 1 by rising-star violinist/composer Jessie Montgomery. As I prepared to hear the piece, it suddenly occurred to me that I wasn’t really preparing to listen. Or, perhaps more accurately stated, I was listening in the manner I do when hearing a new piece of music for the first time — skeptical that it would ever find a place in the inner circle of my musical heart. And let me state my bias here. My "desert island composer" is J.S. Bach. The Passions alone could keep me occupied for years. Add in the Cantatas? Decades. Throw in the Sonatas & Partitas, well, I’m pretty much set for life. (Especially if you give me a violin and nothing to do but practice.) So to hear a piece written by a young, vibrant, living composer that I want to pack in my desert island suitcase along with my Bach, well, I began to believe that Doori might just be able to change classical music… or at least some of us old classical musicians. Bravo, Doori! (I urge you to listen to the entire performance, although I doubt you’ll be able to stop once you’re a few bars in. Ms. Montgomery has also recorded the piece on her own album.)

P.S. Jessie Montgomery is the recipient of the Leonard Bernstein Award from the ASCAP Foundation. She currently serves as composer-in-residence for The Sphinx Organization’s flagship ensemble, the Sphinx Virtuosi. Her works have been performed by numerous leading American orchestras. To get to know Jessie Montgomery a bit better, here she is "unscripted." (I dare say you’ll find her as delightful as she is talented!)

By now we’ve all seen countless videos of performers in virtual environments who weave together various "parts" of a musical piece — everything from duets to full symphony orchestras with chorus. But how does this translate into the world of improvisation?

Violinist Megan Shung, another creative artist forging a path directly through the center of the craziness, decided that rather than fighting against enforced distance, she would embrace it by giving the Internet a performing role.

Megan conducted an experiment, which we now have the pleasure to view. She started with four musicians in four separate locations and put them together with "the 5th performer"...the Internet. She then asked them to improvise... live. Megan wrote, "The great American composer Billy Childs once discussed the difference of 'the clock' in music: In jazz, the clock is out here (on the wall) and everyone plays to that one clock. In classical music, each player has their own clock, and the challenge is to align them. So what is the clock like when you improvise with the Internet's latency?" You’re about to find out.

For me, it was fascinating to watch the faces of violinists Paul Cartwright and Megan Shung, violist Rita Andrade, and cellist Peter Jacobson, as the live improvisation took shape — starting somewhat tentatively and growing to a level of excitement that one could have only imagined would require face-to-face, real-time interaction. (It’s interesting for me to realize that this "experiment" would yield an entirely different result if conducted a second time!)

I’m going to be perfectly honest here. When I read that Barcelona’s spectacular Gran Teatre del Liceu reopened to an audience of almost 2,300, I was aghast. When I read more carefully and realized it reopened to an audience of almost 2,300 plants, serious eyeball rolling ensued. But I implore you to give this performance a chance.

The UceLi Quartet, comprised of violinists Yana Tsanova and Oleg Shport, violist Claire Bobij, and cellist Guillaume Terrail, deliver an almost prayer-like rendition of Giacomo Puccini’s Crisantemi (chrysanthemums). Yes, how appropriate. I’m happy to report that the plants were incredibly attentive, there was no coughing, no loud candy wrappers, and none had to get up to use the bathroom mid-performance.

According to Eugenio Ampudia, the concert’s conceptual artist, the performance was intended to provoke serious thought about the current state of the human condition and the changing audience experience during COVID-19. "At a time when an important part of humankind has shut itself up in enclosed spaces and been obliged to relinquish movement, nature has crept forward to occupy the spaces we have ceded. And it has done so at its own rhythm, according to its patient biological cycle. Can we broaden our empathy and bring it to bear on other species? Let’s start by using art and music and inviting nature into a great concert hall."

As a career cynic, I know it’s not easy to let go of preconceived ideas. But try to simply listen to the beauty of this music and delight in the magnificence of this glorious space filled with life. (And don’t miss the leafy applause at the finale.) Note: Following the concert, the plants were donated to health care workers in Spain, one of the areas hardest hit by the pandemic.

July 1, 2020 at 01:22 AM · This opus was very different from the others in that it didn't focus on the tech as much as it did on the music as it is changing during this unfortunate time. I absolutely loved the Elements of Chance improvisation. You were right, I couldn't help but listen to Jesse Montgomery all the way through. And I did hear in her music the influence of Leonard Bernstein in at least 2 places.

Thank you Diana once again for all of this wonderful music. There is no doubt in my mind that performance practices will return to normal eventually.

July 1, 2020 at 03:45 PM · I much preferred seeing the plants in the audience as opposed to the empty theaters that some artists are recording in these days. Those make me sad.

July 1, 2020 at 06:56 PM · Thanks for another great opus of interesting performances! Doori Na and Jessie Montgomery present here wonderful qualities even beyond their music. They show talent and respect for old and new, and also a passion for raising musical and cultural awareness. Those multi-facets are a delight to see, and I'm thankful that this medium provides that window for us. Elements of Chance was amazing, and I know that the word "chance" must have been selected both in reference to the improvisation and to the chance that this type of collaboration might just not have been possible. And the Concert for the Biocene (yes, I used Google Translate) was terrific! Those old experiments always showed that plants grow better to classical music. They all must have added significant mass as a result of this "food of love" performance (didn't see any chrysanthemums in the audience, oddly).

July 2, 2020 at 12:23 AM · Rhapsody was beautiful and beautifully played. We do need inspiration at this time. I am probably not alone in having thought that this pandemic would be over by now that that we would be back to performing/attending live performances. Who would have believed back in February and March when we were deciding whether or not to cancel concerts in April that we would now be considering whether or not to have concerts in all of 2020. So it is inspiring to see and hear that people are keeping the music going. And it is so interesting to see how this expression of music has changed and evolved as time has gone by. Thank you again for bringing this to us every week.

July 2, 2020 at 11:19 AM · Joe: So glad you enjoyed the music! And it's very possible that you and I will have our first foray back into socially-distanced performing together in September! I remain hopeful.

Teresa: You are so correct! I remember at one point thinking that surely fall concerts were safe. Now some companies have cancelled their entire 20/21 seasons. (So glad you enjoyed the music!)

July 2, 2020 at 02:25 PM · Thank you for this insightful and hopeful post! It is inspiring to see the innovative ways artists are embracing the world we live in and adapting to it.

July 2, 2020 at 03:54 PM · Fascinating and imaginative as always, Diana. (I confess that when the Barcelone performance was over, all I could think about was WHO carried all those plants in and who was going to have to carry them all back out!) Maggie

237.207: What a wonderful comment! You hit upon everything that I also found magical in these selections. Thank you for such a thoughtful response.

2.216: It is inspiring to see the creativity. And thank you for the lovely comment!

Maggie: Thanks so much! And, yes, I was wondering that same thing! Can you imagine the number of trucks to get the plants to the theater and then the number of people who had to carry them in/out?