June 23, 2020, 10:59 AM · Creating this week’s roundup of musical events was a revelation to me. Simply put, I learned a few things about repertoire, composers, and instruments. I saw what a socially-distanced chamber performance actually looks (and sounds) like. I fell in love with an Elgar chamber piece that I’d not heard before. I got to know a new violinist who is now among my "favorites." I discovered a Baroque instrument that was previously unfamiliar to me. And I familiarized myself with the amazing accomplishments of an American composer whose work I knew only tangentially. I hope you’ll make a few musical discoveries yourself. 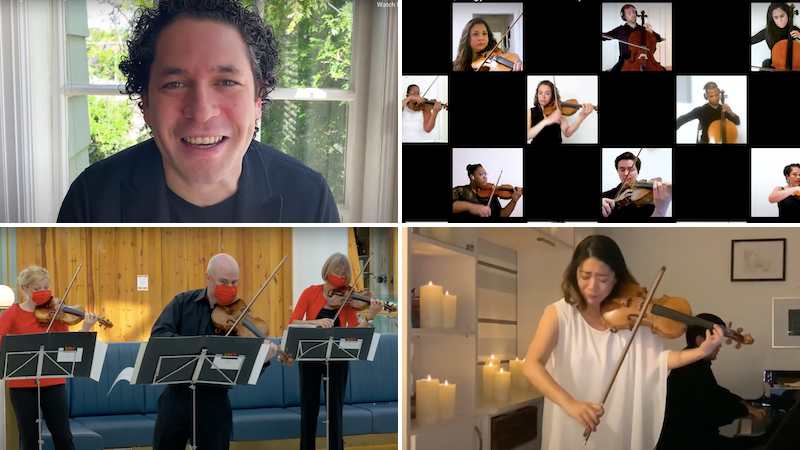 This week, the London Mozart Players give us their first live performance since the pandemic. We’re featuring four online series: Fritz on Friday with Tessa Lark, Uri-Poste Juke Box with Elena Urioste and Tom Poster, Musical Bytes with the Boulder Bach Festival, and Gilharmonic on Violinist.com with Gil Shaham and Laurie Niles. Meaningful tributes continue under the #TakeTwoKnees banner. And lots more!

When the London Mozart Players returned to “live” performances, they followed every rule of social distancing. They observed the 2-meter rule, wore masks, and limited the program to string pieces (no winds or vocalists). And, the audience was watching via live-stream. The resulting performance, directed by Simon Blendis, was broadcast last week in partnership with Classic FM and received over 500,000 views in 24 hours. While their rendition of W.A. Mozart’s Eine Kleine Nachtmusik is about as close to impeccable as it gets, I’ve started the video at a piece that is new to me and that I have absolutely fallen in love with: Edward Elgar’s Chanson de Matin. And don’t miss the next number — the rousing Dobra Dobra by Max Shalka and Felix Stahl — a real showpiece for Mr. Blendis. (The program also includes Tchaikovsky’s Serenade for Strings. And all you need to do to hear the Mozart is move the time bar backward — and I highly recommend that you do.)

As part of our continuing coverage of #TakeTwoKnees tributes, violinist MingHuan Xu and pianist Winston Choi of Duo Diorama play William Grant Still’s Mother and Child from his Suite for Violin and Piano. In the spirit of perpetual learning, here’s what I discovered about William Grant Still via Wikipedia: Still was the first African American to conduct a major American symphony orchestra, the first to have a symphony performed by a leading orchestra, the first to have an opera performed by a major opera company, and the first to have an opera performed on national television. (This is a truly beautiful performance, musically and visually, of a wonderfully touching piece.)

Because everybody needs a little more Elgar, and since most of us missed hearing what has become standard graduation musical fare, Maestro Gustavo Dudamel has a treat for you. Members of the Los Angeles Philharmonic and the Youth Orchestra of Los Angeles (YOLA) perform Edward Elgar’s Pomp and Circumstance in honor the 2020 YOLA graduating class. Keep your eyes peeled for LA Phil concertmaster Martin Chalifour! (P.S. This is NOT the Elgar piece with which I was not familiar. See the London Mozart Players above.)

The Sphinx Virtuosi bring you Elegy: In Memoriam - Stephen Lawrence by Philip Herbert. As many v.com readers know, the Sphinx Organization was founded in 1997 by Aaron P. Dworkin with the goal of "addressing the underrepresentation of people of color in classical music." The Sphinx Virtuosi is a professional chamber orchestra "made up of 18 top Black and Latinx classical performers." (This beautiful work was written in 1999 by Black British composer Philip Herbert in response to the tragic murder of Stephen Lawrence.)

Master violinist Gil Shaham comes by the bad dad jokes honestly as the proud father of three. And while his jokes might make co-host Laurie Niles roll her eyes, his delivery is so completely charming that one has to forgive his comedic inadequacies. (He can’t be good at everything, can he?) On last Sunday’s live Father’s Day broadcast of Gilharmonic on Violinist.com, violinist Vaishi Sharma gave a lovely reading of the first movement "Largo" from Henry Eccles' Sonata in G minor (or what Mr. Shaham referred to as "Dr. Eccles and Mr. Hyde"). Elizabeth Wei delivered an expressive excerpt from Max Bruch's Scottish Fantasie, (a piece Mr. Shaham referred to as "Scratch Frantically"). Elena Urioste and her pianist/husband Tom Poster offered a romantic rendition of Un Sonnet d’Amour from Samuel Coleridge-Taylor’s Petite Suite de Concert, Op. 77. And in what is surely an online first, Elena, a seasoned Yogi, taught Gil and Laurie some moves. (I personally loved when the subject of yoga came up and Tom suddenly had to go practice his kazoo!) NOTE: I’ve cued up the video at Mr.Shaham's discussion of "musical grammar" that I found particularly interesting.

Speaking of the kazoo, evidently Tom wasn’t kidding when he headed off to practice! Here Elena Urioste and her kazooist/pianist/husband Tom Poster play Glenn Miller’s In the Mood. (I have two words for you, Tom: Keep practicing!) The duo’s jukebox series is called #UriPosteJukeBox. The costumes and myriad instruments they play, in addition to delving into classics like "Stairway to Heaven," make it a memorable journey. (The duo has filmed close to 90 episodes!)

I recently featured a cellist who plays standing up, so is it much of a leap that I now feature one who plays with the cello under his chin? Boulder Bach Festival launched a summer mini-series called Musical Bytes: Historical Happenings at the Curiosity Corner. So take four minutes and let Music Director Zachary Carrettín introduce you to the Cello da Spalla. (Let me be perfectly candid. Would I learn about the Cello da Spalla if I weren’t basically a prisoner in my own home? Probably not. But I’ve got the time and turns out it's quite fascinating!)

Violinist Tessa Lark probably has many musical heroes. But there is one of which I am certain: Fritz Kreisler. Tessa writes, "Few match Kreisler’s natural gift of finding such heartfelt, magical fantasy in their music." Agreed! Since the beginning of May, Tessa has released a video each Friday on Facebook under the moniker #FritzonFriday. Her latest entry is Kreisler’s Tempo di Minuetto (in the style of Pugnani). (Spoiler alert: Tessa will be the guest star on Gilharmonic next Sunday, June 28).

June 23, 2020 at 06:54 PM · As much as I love the clips you have collected here, I love your writing and insightful, witty commentary throughout. What a gift! Thank you for sharing these. I am so glad to have been introduced to Chanson de Matin and so many beautiful, inspiring performances. ~Christina

June 23, 2020 at 10:58 PM · I did scroll back to “Eine Kleine” by the London Mozart Players and it is amazing! I’m so grateful to hear this wonderful performance!

61.87: Glad you took the time to go back and hear the Mozart! Their performance was truly delightful.

June 25, 2020 at 12:13 AM · Recently discovered your website - full of delights, poignant pieces, such variety. Gratified by your efforts.

June 25, 2020 at 01:00 AM · OK, gotta say that my favorite this week was the cello da spalla!! I especially liked how Carrettin showed artwork in which the instrument was featured as we listened to him play. There have been times that I have wondered how true to actual performance practices period artwork is (for example, does the Strauss monument depict his actual bow hold?) but this presentation suggests that the artwork may be fairly representative. In any case, the playing, which looked like what was happening in the artwork, was beautiful and sounded "authentic."

June 25, 2020 at 01:49 AM · Another wonderful roundup! Thank you. What I love most is the musical education I’m getting, not only from the music but from your marvelous commentary. Thanks for including two of my favorites: Tchaikovsky’s Seranade for Strings and something by Kreisler! Still’s Mother and Child was glorious! Our dear friend teaches yoga and I am sending her the link to Gilharmonic. I did scroll back to hear the Mozart and loved it! And by the way, I’m so glad you “graduated” to new Elgar selections! Looking forward to next week as usual!

June 25, 2020 at 01:04 PM · 109.51: Thank you and welcome! Laurie Niles has created a wonderful community here for us to share great music and learn about our favorite instrument. Thanks for your gracious comment!

237.207: I'm delighted you enjoyed the Cello da Spalla! And the connection back to the artwork really was wonderful! Thanks for the wonderful comment!

Joe: Thank YOU for always taking the time to listen and comment. (By the way, Elena runs a yoga camp for string players as well. I know Laurie has written about it!) I'm delighted, as always, that you enjoyed the selections and feel you are learning more about music (especially given the broad knowledge you already possess)!

June 25, 2020 at 11:26 PM · You struck my synergy chord when you featured Dobra, Dobra, a Roma tune, played by the London Mozart Players, followed by the sign saying Westfield Mall, all heard on my iPhone. All that was missing was Cinnabon. Thank you, Diana, for reminding us that a day without Dobra is not complete. What is Dobra?

June 26, 2020 at 12:25 AM · Maybe it’s the somber feeling of the times, but I was particularly moved by several of the performances this week. The Sphinx Virtuosi were stunning, playing that devastating piece by Philip Herbert. But my favorite was the performance by the Duo Diorama of Still’s Mother and Child. Ming Huan Xu makes the violin “sing” in a way I have rarely heard. As a cellist, I aspire to that kind of open, honest and vulnerable playing.

And of course including Elena and Tom’s In the Mood strikes a nice balance between sweet and outrageous.

June 26, 2020 at 01:15 AM · Paul: Wonderful comment! (I couldn't stop wondering if Abercrombie & Fitch had to pay for the signage positioning!) As for Dobra, it's coming up in my search as a river in the Karlovac County in the Republic of Croatia, the currency of São Tomé and Príncipe, a tea room in South Carolina, and the name of a Serbian actress. Take your pick!

June 26, 2020 at 12:20 PM · David: What a thoughtful comment! Yes, the Philip Herbert piece was stunning and played so poignantly by the Sphinx Virtuosi. And Duo Diorama's performance of Still's "Mother & Child" was beautiful on every level. And you nailed it: MingHuan Xu really does make the violin sing. And who doesn't love a kazoo!