June 1, 2020, 11:12 PM · EDITOR'S NOTE: We offer this post in solidarity with the Black community on the eve of Blackout Tuesday. We will not post anything additional on Tuesday.

This week we offer a compilation of the musical statements generated in response to New York Philharmonic Principal Clarinetist Anthony McGill’s "Take Two Knees" challenge (#TakeTwoKnees), which has inspired musicians around the globe to post performances on social media to support the cause of justice. We've paired each one with a quote by Dr. King. 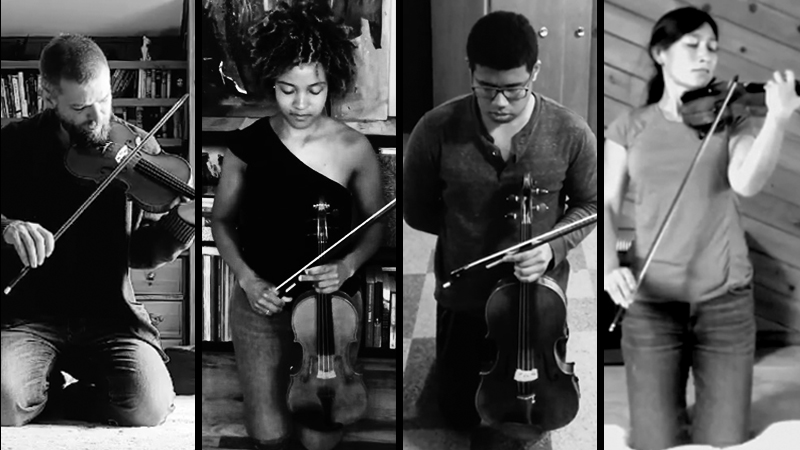 "Whatever affects one directly, affects all indirectly. I can never be what I ought to be until you are what you ought to be. This is the interrelated structure of reality."

"I refuse to accept the view that mankind is so tragically bound to the starless midnight of racism and war that the bright daybreak of peace and brotherhood can never become a reality."

"I believe that unarmed truth and unconditional love will have the final word in reality. This is why right, temporarily defeated, is stronger than evil triumphant."

"Our lives begin to end the day we become silent about things that matter."

"History will have to record that the greatest tragedy of this period of social transition was not the strident clamor of the bad people, but the appalling silence of the good people."

"There comes a time when people get tired of being pushed out of the glittering sunlight of life's July and left standing amid the piercing chill of an alpine November."

Violinist Rachel Barton Pine plays "Nobody Knows the Trouble I See," an African-American spiritual that originated in the time of slavery.

"I have decided to stick with love. Hate is too great a burden to bear."

"The ultimate measure of a man is not where he stands in moments of comfort and convenience, but where he stands at times of challenge and controversy. No one really knows why they are alive until they know what they’d die for."

Sincere thanks to these artists for their heartfelt, inspired, poignant performances.

"Only in the darkness can you see the stars." — Dr. Martin Luther King, Jr.

June 2, 2020 at 05:51 PM · I have been trying to tell my nephew, a young African American cellist, and SPA alum, that one of the best ways he can channel his hurt and anger in this moment, is by using his gift to the fullest. I'm not sure how well I got through to him, so thank you for demonstrating it for him so beautifully.

June 2, 2020 at 06:47 PM · To 164: What a lovely comment. The artists we featured, and the many more who have contributed to #TakeTwoKnees, are truly inspirational. It is my fervent hope that your nephew will discover the same inspiration and, in doing so, find a way to channel his hurt and anger... which I'm sure feels absolutely overwhelming to him right now. I carry you both in my thoughts.

June 2, 2020 at 10:09 PM · Al the featured performances were beautiful. I was particularly moved by Melissa White's simple, but powerful, rendition of "the Black national anthem"

June 2, 2020 at 10:11 PM · This is a wonderful compilation! I salute Mr. McGill for creating this challenge and for all the musicians who responded.

To 17: It is truly a wonderful, positive challenge that Mr. McGill created. So glad you liked our choices! And there are many more terrific performances available on Facebook.

June 3, 2020 at 01:12 PM · I particularly liked the diversity of the players and their statements, along with the likely "outsiderness" that each probably feels as they identify with the current situation. It's beautiful to see everyone standing/kneeling together in harmony and in support of the truth that everyone matters and that justice matters.

June 3, 2020 at 01:21 PM · "Music hath charms to sooth a savage breast", as William Congreve said. Thank you to all the wonderful musicians who used their God-given talents to help sooth our heavy hearts.

June 3, 2020 at 03:18 PM · Speaking of taking a knee, I saw it proposed that the City of Minneapolis could atone (however partially) for its poor relationship with African-Americans by hiring Colin Kaepernick to play for the Vikings, who evidently could use his talent. Not a bad idea.

June 3, 2020 at 06:27 PM · What a brilliant and emotional post Diana. The music was as magnificent as the quotes were eloquent and poignant. And what a beautiful tribute this is as the sound of these instruments so closely resembles the cry of the human voice. Music Thank you.

To 207: Yes, standing/kneeling in harmony was wonderful to see.

To Joe: I had a similar reaction when listing to these musical tributes. Once you strip away the beauty of multiple instruments playing in harmony and listen to a simple line delivered by one musician, it is incredibly reminiscent of the cry of a human voice.

June 4, 2020 at 05:03 AM · Just stunning and heart-wrenching, to hear these people express their pain and sorrow through their instruments, and then to bow their heads and bodies in honor of those who have fallen, but will not be forgotten.

June 4, 2020 at 07:32 AM · This is a very powerful and moving show of solidarity with the Black community. Each performance is individually emotional, and collectively nothing short of amazing. This truly shows the power of music. I think it was also very encouraging that the common themes In the personal statements were that love will win out over hate, and that good people should unfailingly stand up for what is right.

The incredible outpouring of support, encouragement, and demand for true change across all spectrums of society is a testament to how far we have come, just as as the horrible actions in Minnesota, Kentucky, Omaha, and other places are a grim reminder of how far we still have to go.

Thank you for sharing this for everyone.

To Richard: Yes, the personal statements from Dr. King are as relevant today as when he first made them. And I agree with you wholeheartedly about the power of music. Thank you.

June 8, 2020 at 05:02 AM · Thank you and all the musicians who participated in this soul soothing ministry of music,