February 15, 2019, 7:14 PM · Madness, mayhem, dueling dynasties, and a sustained high E flat. Ah, opera! And while operatic fireworks tend to happen on stage (or, at times, offstage), there are particular fireworks that occur between the stage and the orchestra pit. More specifically, in Gaetano Donizetti’s tragic masterpiece Lucia di Lammermoor, between the soprano and the principal flute. Known simply as the “mad scene,” these few minutes of musical histrionics are some of the most compelling and dramatic moments in all of operatic history. Yesterday I had the privilege of listening to two young artists rehearse this incredible double cadenza.

A wonderful aspect of living away from a large metropolitan area is hearing emerging artists — those who are on the cusp of significant careers. I recently wrote about Tessa Lark, a formidable violinist who I believe falls into this category. I now write about two young performers who will appear in Knoxville Opera’s upcoming production of Lucia — Meryl Dominguez, soprano, and Hannah Hammel, flute. 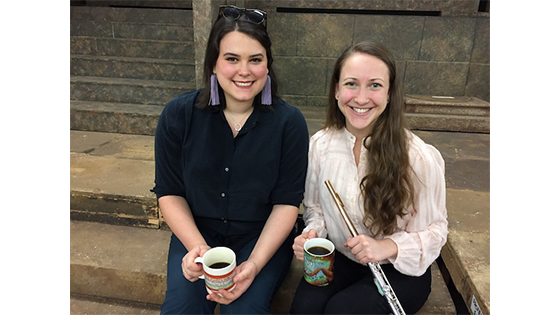 These artists are ages 26 and 25, respectively. In the words of an old-time comic, I have shoes older than they are. In fact, combine their ages and I still have a decade on them. That said, they are stepping into their starring roles with confidence and grace.

Before I comment on their abilities, let me set the stage.

The Maddest of All Mad Scenes…

To understand the poignancy of the mad scene, here’s the speed-dating version of the opera’s plot. Lucia, a young Scottish lass, is coerced to marry someone she doesn’t love by her evil brother for his own political gain. Lucia, in love with someone else (of course) who is not “of her people,” abandons her lover to keep the familial peace (bad decision). On the night of her arranged marriage (spoiler alert), she stabs her new husband to death. Then, in true operatic tradition, she goes mad. Utterly, hopelessly, irrevocably mad.

As Lucia spirals into insanity, she pictures the wedding (and life) she might have had with her one true love. Musically, her madness manifests itself in trills, ascending staccato scales, virtuostic melismas, and, of course, excruciatingly stratospheric high notes. In the hands of a great singer, Donizetti’s “mad scene” is a vocal tour de force. In the hands of a great singing actress, it gives you a ringside seat into the plummeting depths of Lucia's despair.

Donizetti chose a solo flute from the orchestra pit to represent the voice inside Lucia’s head. She hears it, tries to understand it, and is both comforted and agitated by it. The solo voice and solo flute are the only sounds heard for several minutes. We, as audience members, have the eerie feeling that since we also hear the flute, perhaps we, too, are sinking into the abyss. It’s a truly remarkable musical effect.

Donizetti’s mad scene was originally written for voice and glass harmonica. As the story goes, after a temperamental glass “harmonica-ist” walked out on rehearsal, the composer realized the flute might be a better, more reliable, option. The classic pairing was made famous by such vocal icons as Nellie Melba, Joan Sutherland, and Maria Callas — divas who set the standards for generations to come.

Clad in jeans and bearing mugs of hot tea, Meryl and Hannah were completely at ease rehearsing their “duet” with conductor Brian Salesky (full disclosure, my husband). When the double cadenza begins, there are no words… just beautiful vocalizing which seems almost to be improvised in true cadenza fashion. Since the three musicians rehearsing didn’t all have measure numbers in their scores, rehearsal banter was interesting. (“Should we start at the ‘deedle-deedle-deedle’ or the ‘ba-ba-ba-baaa’?”) As a violinist, I was extremely excited to hear a discussion about the length of notes in a specific passage. Meryl immediately stated they should be detache'. And, without hesitation, Hannah understood.

This will be Hannah’s first time playing the opera, but as a flutist, she certainly knew about the famous mad scene. “Although it’s not in the orchestral excerpt books,” Hannah noted, “it’s one of those pieces you dream of playing.” Meryl has performed Lucia before, at the prestigious Academy of Vocal Arts (AVA) in Philadelphia. “It’s absolutely my favorite role,” she affirmed. “And from an acting perspective, Lucia is the Scottish version of Juliet.”

In a twist of fate, Meryl and Hannah recognized each other at the first “sitzprobe” (an orchestra reading with singers). In fact, it was more than passing recognition. They both attended Oberlin College and graduated in 2015 — Hannah with a flute performance degree and Meryl with a double degree in voice and dance. Hannah went on to get her Masters degree at Rice University and Meryl completed the artists’ program at AVA.

Fast forward one year and Hannah is principal flute with the Knoxville Symphony Orchestra (KSO). She also served as Guest Principal Flute with the Pittsburgh Symphony, substituted with the New York Philharmonic, and won the National Flute Association’s Young Artist Competition, the largest flute competition in the U.S. Meryl is making her operatic debut with Knoxville Opera and, just this past weekend, won the mid-Atlantic regional Met competition and will move on to the semi-finals in New York.

While this seems a picture perfect scenario, Hannah admits to taking 10 auditions with other orchestras before landing her position with the KSO. Meryl feels lucky to have been “discovered” while still in school when Maestro Salesky traveled to Philadelphia to hear her perform live — an investment of time based solely on his assessment of a studio audition she gave in New York.

The future is certainly bright for both Hannah and Meryl. I suspect this will not be the first time their professional paths intersect. And, as a listener, I believe I may have just experienced one of those “I knew them when” moments.

In an ironic parallel, Donizetti himself spiraled into madness as a result, most likely, of syphilis-induced dementia. He died in 1848 at age 51 — a broken man who reportedly could not even recognize his own music. A composer of 75 operas, many of which remain in the standard repertoire today, Donizetti was revered in his lifetime and, certainly, in the decades that have followed. He was 38 years old when he wrote Lucia.

February 16, 2019 at 02:09 AM · This brought back memories. Although I majored in violin, I began studying opera scores, start to finish, on my own time while I was still in school. Donizetti is a winner -- I immersed myself in a number of his scores over the years and got to like them right away. Lucia was the first one I tackled.

Thanks to modern studio recordings, we can now hear Lucia restored to its full beauty -- with all the traditional theatrical cuts opened up so we get the whole score that the composer left to us.

As soon as I started reading about the solo flute for the Mad Scene, I thought to myself: "Didn't Donizetti originally intend this part for glass harmonica?" Sure enough -- as I scrolled down through your article, that's just what you confirmed.

February 17, 2019 at 11:31 PM · Jim, Thanks so much for your comment! Interesting on the glass harmonica. For all the years I have known the opera and all the performances I have heard, I never knew of the original (glass harmonica) version of the Mad Scene until I began to do some research for this article. There's always so much to discover!

February 18, 2019 at 03:04 PM · The glass harmonica is certainly the preferred "instrument" for the Mad Scene. There are excellent youtube videos which demonstrate and explain the history, construction, and virtuosity required to execute the music of LUCIA DI LAMMERMOOR. If one listens very closely to Joan Sutherland's first complete recording of the opera, one can hear sounds in addition to the solo flute in the Mad Scene, but I suspect this was a celesta doubling the flute!

February 18, 2019 at 05:07 PM · What a wonderful introduction to these two artists, and a fantastic synopsis of one of my favorite operas. Diana, such an engaging article! Thank you for sharing! ~Christina

To 17: Thank you for the additional information on the glass harmonica and the possibilities to view on YouTube!

To Christina: Thank you for being such a loyal and enthusiastic follower!!!

To 52.2.9: Thank you! Summarizing a three-hour opera into one paragraph is my specialty! (Just kidding.) The two young artists made quite an impression on me, not just for their talent, but their work ethic. Thank you for your kind comment.

February 19, 2019 at 04:06 PM · Wonderful article, Diana. You have a real knack for explaining what is going on in this "mad" scene. Also, it was a nice touch to highlight those two talented young ladies.