Musical Light During a Dark Year: A Solstice Reflection

December 21, 2021, 9:01 AM · Today is the Winter Solstice, the longest and darkest day of the year. Many cultures celebrate with candles, lighting of fires and other light-and-darkness symbolism, reflecting on the last year while looking forward to the return of more light to the world, literally. 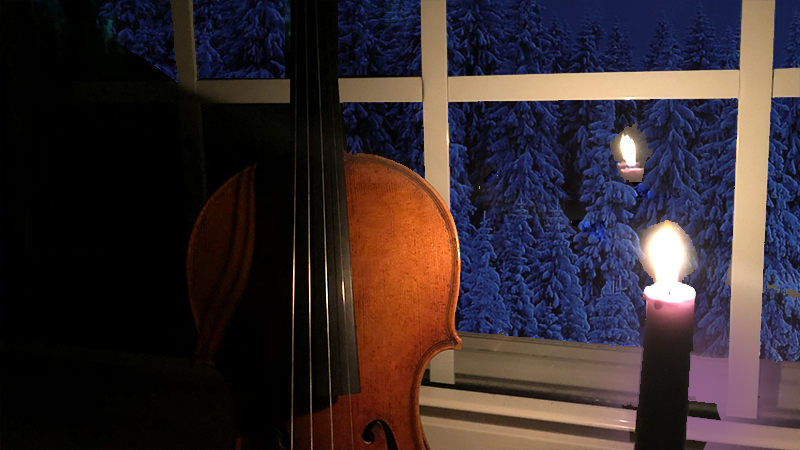 I don’t think it’s much of an exaggeration to say that the world has been covered in darkness for the last two years. While individual experiences vary, collectively we have all experienced the heaviness, turmoil, stress, conflict, grief, and myriad other emotions.

Within the darkness for me, there have been flickers of light and fleeting moments of joy against the backdrop of fear and sadness. Often, those moments have been brought by music. Here on the darkest day - at a time where it looks like things are getting darker, not lighter - I invite you to reflect with me and to share (in the comments) your own moments of musical light from the last year.

Starting at the beginning of 2021, a blazing moment of light came for me in January, when I was invited to play violin in-person at my church at a service attended by the newly inaugurated President. With masking and distancing protocols in place, standing next to a heavy-duty air filter and a considerable Secret Service presence, I felt as safe as I possibly could. Getting to play violin in-person, with a dear friend at the piano, in a place I love (with considerably better acoustics than my basement apartment) -- kept me going for quite awhile. (As did gleefully calling my friends to tell them I played violin for the President!)

Through much of the year I found steady, comforting warmth through the online technique class Violin Breakfast, created and taught by pedagogue Amy Beth Horman. Her creativity, positivity, and dedication to daily fundamentals inspired me every time I managed to drag myself to Zoom, and the exercises left me feeling simultaneously freer and more secure than I ever have on my instrument. As a teacher, I also rediscovered the importance and restorative power of being a student again at times - to receive the energy given by someone else.

Playing some outdoor concerts with my students as weather warmed in April and May also gave me a huge boost. Seeing and hearing them in person was simply wonderful - affirming, joyous. Seeing their joy in music and performance lifted my own spirits considerably.

And, in a shining moment of collective effervescence, attending alongside what seemed like every other (vaccinated, masked) violin-lover in the D.C. area, hearing Hilary Hahn and the National Symphony Orchestra perform the Brahms Violin Concerto in-person at the Kennedy Center made me fall in love with music all over again.

The energy in the room was electrifying. The crowd's excitement was palpable from the second Hahn walked onstage, as was the joy coming from the musicians onstage. All of us were ecstatic to hear in-person music again.

Between those larger, landmark events, little moments within the music community online have been like little candles in the darkness, lighting the way on some of the worst days. An encouraging comment on Instagram or one of my blog posts here. A message from a musical friend, reminding me that I’m not alone. A particularly funny meme or tweet posted that startles me into laughing out loud in the middle of my regular scrolling. Something from a podcast that feels like the speaker has a magical insight into my own musical challenges.

So, happy Solstice to all. I'd love to hear what your own moments of musical light this year have been down in the comments!

December 21, 2021 at 07:58 PM · Great blog post Claire, thanks and happy Solstice to you too! It's great that the days are getting longer again already!

December 21, 2021 at 08:52 PM · Claire, you remind us all to look back as we reach what the poet John Donne called “the year’s midnight.” I remember feeling engulfed and amazed anew by a symphony orchestra, in one of the first concerts to which I ventured. That sound! Perhaps the enforced pause can help us to live with more gratitude and awareness of what we have, and more understanding and sympathy for others. Best wishes to all!

Hilary Hahn embodies the favorite slogan of a tennis pro that I once had a few lessons from: "Grip it and rip it."

December 22, 2021 at 02:14 AM · Despite the pandemic, and despite starting the year barely able to play because of a severe whiplash injury suffered in a car accident in 2020, this year ended up being one of my best years as a musician.

Perhaps the single most memorable thing that I've ever done as a musician happened this spring, as I was part of the Socially Distant Orchestra's virtual performance of Mussorgsky's Pictures at an Exhibition, with time-lapse visual art incorporated into it. I didn't get to play the whole thing, because it was done as a rotating orchestra, but I appeared in five movements: Tuileries, Bydlo, Limoges, Catacombs, and Great Gate of Kiev. (Musicians could sign up for up to three movements and add themselves to waiting lists for additional movements.) Four other members of my community orchestra also participated. What I loved about this was that there was no way this kind of presentation could have been accomplished live; the visual art component could only have been done in time-lapse video.

I also started regular viola lessons for the first time in my life in 2021. I had searched unsuccessfully for a local teacher for years and never found anyone who accepted adult students, could teach advanced viola repertoire, and had evening or weekend openings; I had a handful of lessons in 2016 but it didn't work out because I was never able to get a consistent scheduled time. It was the pandemic that got me to take the plunge and go online. And I'm glad I did. I found a teacher who had suffered similar injuries to mine in the past and could help with injury rehab and prevention, and the result is that the past four months have been the longest I've played without pain since 2017. I also worked on repertoire with a teacher for the first time in my life, and polished unaccompanied Bach to what I would call a real performance standard for the first time.

I returned to in-person ensemble playing with a few strings-only rehearsals in the spring -- we were never able to secure a suitable outdoor performance venue, but we managed to record some video before disbanding for the season.

The fall brought a return to performing, with a fully vaccinated orchestra and audience. It started out a bit tentatively by design, with a program deliberately selected to require only pairs of winds and brass. There was still a bit of scrambling to secure an alternate performance venue after our usual venue informed us only hours before our scheduled first rehearsal that wind instruments would not be allowed into the building. But we pulled it off despite the challenges. These were the first moments of our first concert in 19 months:

The fall also brought new musical opportunities. During the pandemic I decided to make a pivot in my legal career and go back to school for a LL.M degree at UC Davis. This meant my first audition in years, and when I got into the university orchestra, the opportunity to rehearse and perform regularly in a world-class concert hall at the Mondavi Center. The orchestra is open to alumni, which means I can play in it (and at the Mondavi Center) as long as I live in the area.

This concert, with the UC Davis Symphony Orchestra was my final concert of the year. The atmosphere was electric for the whole night. It's also one of the concerts I'm most proud of, and because of livestreaming, it was the first time that any member of my family ever saw me performing on a string instrument in real time. Being able to watch the entire concert on YouTube has left me with a new sense of wonder at the whole experience of orchestral music, and a new perspective on my whole two-decade-long journey from late starter to where I am now.

December 22, 2021 at 06:31 PM · Viola section, second desk, inside. In the wide-angle shots, you can see me just to the right of the first-desk second violins. Should be much easier to spot me when the camera is on the violas.

In the southern hemisphere they experience the Ying and Yang to us.