Conversation With Andrea Dawson: Etudes for the Modern Violinist 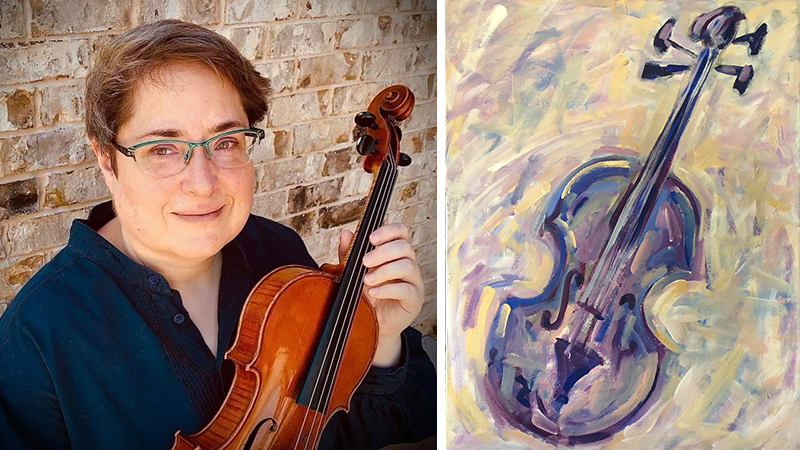 Violinist Andrea Dawson, and the cover art, by Frank Baugh, for her new book of modern-music etudes.

The book presents both a wonderful introduction to 20th and 21st century music theory and a fantastic series of etudes for students and teachers looking to expand their horizons beyond our usual 18th and 19th century tonalities and technical studies. It includes sections and etudes with pentatonic, whole tone, modal, and octatonic scales, featuring extended techniques such as tremolo, ponticello, glissando, and Bartok pizzicato. It also includes an excellent glossary and suggested listening list.

An Associate Professor of Violin at Middle Tennessee State University, Andrea earned her Bachelor of Music degree from Oberlin College and her Masters and Doctoral degrees from the Eastman School of Music.

I had the opportunity to talk with Andrea on Zoom about the new book and her inspiration for it. Here is our conversation:

Claire: What gave you the idea for this book?

Andrea: As a student, I learned that just about every problem in violin playing had an etude. Any challenge or skill in the repertoire - we have an etude for it! When I became a teacher, I realized how important etudes were. Every time a student has a problem, you can refer them to an etude.

Then a while ago, I had a student learning the Barber concerto. He was having trouble hearing the intervals, and I thought, "Surely there’s an etude for that." As it turned out, there wasn’t. I searched the Internet for modern violin etudes and found very little. So I thought, "All right then, I guess there’s a need for this." When the pandemic hit, I realized, "All right, I guess I have time to do it." And that’s how the project got started.

Claire: How did you go about creating the etudes?

Andrea: Well, I’ll first say that I’m not a composer. At least, I never thought of myself that way.

The new book is actually Take Two. What I originally wrote is probably going to be Book 3! Because after I wrote my original etudes, I started giving them to some of my students, and they couldn’t play them - not at all. It certainly wasn’t fitting the niche that I was aiming for.

I kept trying to write easy etudes, but they kept getting harder. I couldn’t do it. I sent them to Cora Cooper, a violinist and publisher at Sleepy Puppy Press. She also said the etudes were difficult, and she suggested that I organize them into the categories that are now in the book. From there, I started to plan this book itself, with a certain number of etudes in each category. To keep it easier, I gave myself the limit of no shifting, but I think some of them are still pretty tricky.

Claire: At the intermediate level, there tends to be so much emphasis on shifting, and so getting up to the higher positions becomes the defining characteristic of the intermediate violinist. The attitude seems to be "if it’s first position then it must be easy." I'm happy to say, I think this book destroys that belief.

I found that in my conservatory training, violin repertoire, music theory and aural skills all were taught chronologically. That creates a perception that as we go through history, things get harder; and depending on how long someone studies, they may only get up to that point in history. In our studies, most of us don’t ever really get past 1900 - which is 120 years ago at this point! That is, unless we have really made an effort, or play in a separate contemporary ensemble, or have a teacher who is particularly interested in music from the 20th and 21st centuries.

What do you think needs to happen in pedagogy in the early levels, so that students don't arrive at conservatory asking, "Um, what is dissonance?"

Andrea: When I was in high school I was taking from Robert Koff, who was in the Juilliard Quartet. I credit him for giving me my love for Bartok. He coached one of my groups I was in on multiple Bartok quartets, and we did Bartok duets in lessons. I also took piano lessons from his wife, so I did the Mikrocosmos on the piano. These are paced gradually and elegantly. Those were some of my influences, actually, when writing this book.

It needs to start with students having the opportunity to listen and hear more modern works, and then having accessible repertoire to play in those styles at the more basic and then intermediate skill levels.

Claire: I love that your etudes have fun names. It’s not Pentatonic Etude No. 1, it’s "Flowing." How did you come up with titles? Did you have a theme in mind and then write the etude around it, or write the etude first and then name it?
BELOW: "Perky Pentatonic," from Andrea Dawson's 24 Etudes for the Modern Violinist, performed by Jiening Zhang.

Andrea: Usually, the titles came second. The titles are an invitation to start to explore. I want people to hear these as fun music, not as tedious technical exercises. I consciously focused on making different note patterns that are immediately catchy and fun to play.

Claire: You’ve also written out suggestions for how to practice. In particular, you’ve frequently written out one of my favorite tricks for practicing dotted rhythms, which is to play all the subdivisions. Seeing it written out as straight sixteenth notes is so helpful. How did you decide to include extra practice tips?

Andrea: Originally there was going to be a lot more, but I thought I should limit myself to the number of pages were actually going to be in the book. I love making handouts, and I had gone down a rabbit hole of making way too many pages of explanation. What you see is a lot of self-control and restraint on my part. There’s a lot more that I wish I could have included.

Claire: For a student who has grown up in a traditional tonal harmonic system, say, mostly Suzuki, how do you approach the introduction to dissonance?

Andrea: I was conscious that students were going to approach my etudes from a certain vantage point, having grown up learning to play Mozart and such. The titles, with their humorous aspect, are meant to pull them out of that. I mean, "Bullfrog Ballet" is not going to be your normal melody. Instantly, that title makes us feel like this music doesn't have to sound like Mozart.

When you’re listening to a piece of modern music, if it feels alien to you, then go with that. Imagine, "Oh, I’ve traveled to a different planet, and I’m experiencing the music of their culture. This is a love song on this planet." It’s okay if it sounds alien. You can start adjusting your ears to it instead of thinking, "Oh, this doesn’t sound good in terms of Mozart."

If the complaint is, "It’s not tonal" - well, it’s not trying to be tonal, so you need to listen to it on its own terms.

Claire: For teachers or violinists who are reading this interview and thinking, "I just realized that I don’t teach or play anything written in the 20th or 21st centuries..." What advice would you give them to help their students, or themselves, to prepare to play more contemporary music?

Andrea: It starts with our own attitudes toward that music. Students definitely read what teachers think, whether they say it or not. It’s important for teachers to express curiosity and interest in other music, and to model that attitude for students. It can be as simple as listening to the music, expressing an interest and openness to trying new things, or sharing thoughts after going to a contemporary concert.

I know that my generation at times can be very stodgy. We consider Bartok as adventurous. And actually I do think the Bartok 44 duos for two violins are a great starting point for violin students. They’re playable and interesting, and teachers and students can play them together in lessons.

Speaking as a teacher, I think most of our students are more open about different styles of music than we are. So in most cases, we need to catch up to them. They want to play commercial music, fiddle music, video game music.... Rather than hold them back, we should encourage them. We should encourage them to do things that we don’t know how to do - that is part of the fear for teachers.

For example, I’m not great at improvisation, but what a great skill to have! Why should I limit my students because of I’m not comfortable with something? Encourage them to embrace things that might be out of our own comfort zones.

To purchase Andrea's book for violinists or violists, please visit Sleepy Puppy Press. It is available in both print or digital formats. The first volume is suitable for intermediate violin students who read music fairly fluently and are playing at a Suzuki Book 4 level or up.

For the Love of Kreutzer

December 17, 2021 at 06:30 PM · Martinu's "Rhythmic Etudes". They are also musically very appealing and come with a piano accompaniment.

20th century music is often much more rhythmically complex than older music. My teacher told me that if I mastered the Martinu studies nothing rhythmic would ever shock me or be a problem.