An Unexpected Experience: How I Ended Up Playing Violin At Mass For the President

January 30, 2021, 11:56 PM · I played violin at Mass for President Biden last Sunday. It was a wholly unexpected and completely serendipitous experience for which I am extremely grateful as a violinist, an American, and a Catholic. 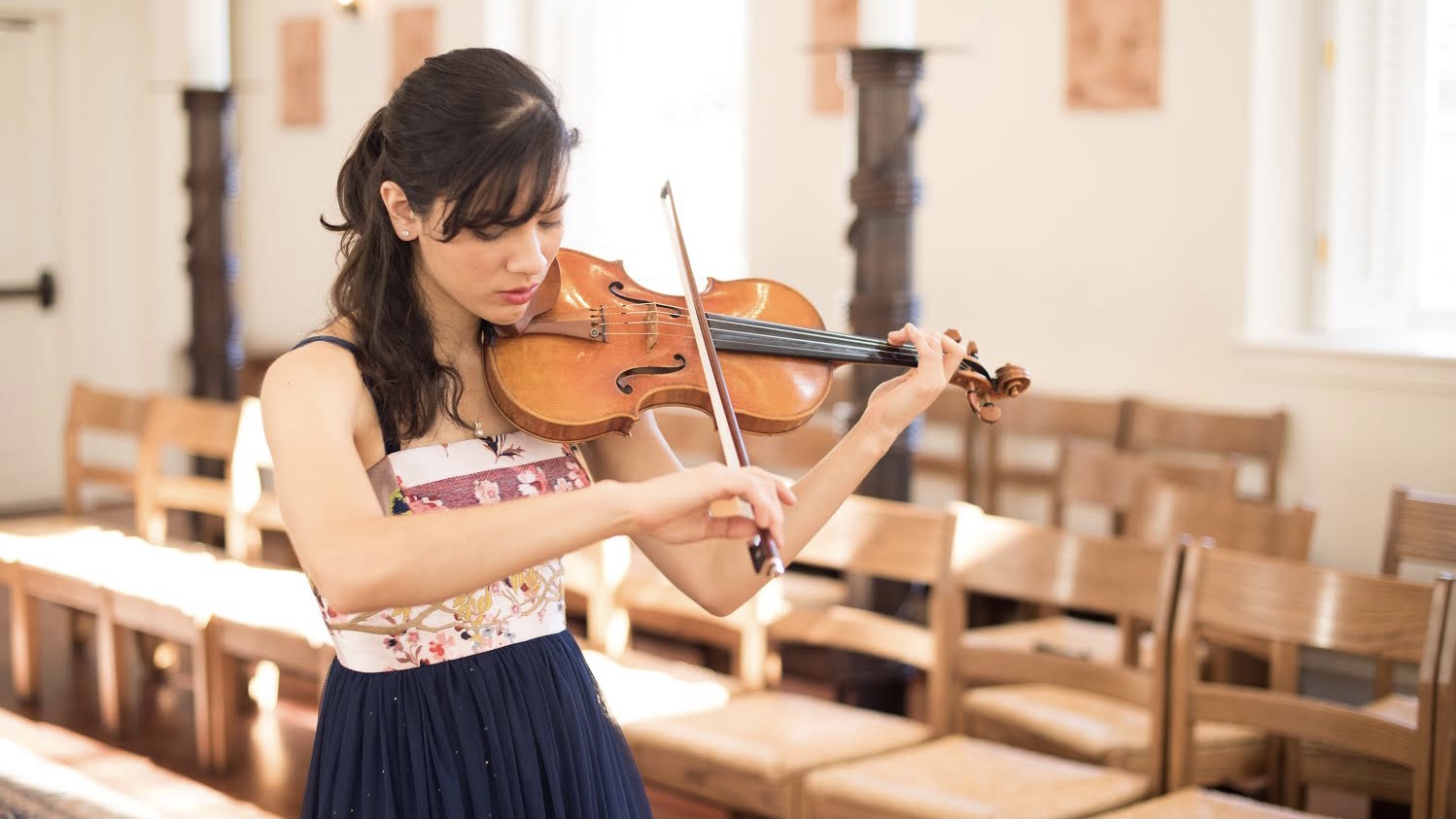 Like most of the world, I’ve been on some combination of lockdown and quarantine for the last eleven months. I haven’t performed in public or played at a church service since February of 2020, and all of my teaching is online. I converted a corner of the basement apartment into a makeshift online teaching studio, and there I spend most of my time. I’m used to it by now. I have what resembles a routine in this pandemic world and have found some silver linings in all of it. I’ve also become fearful and very hesitant to break my pandemic routine, or to go to places where I know there will be people.

A week ago, I got a text message that convinced me to venture out into the world. It was from a dear friend and the Director of Music at my church, Holy Trinity Catholic Church in Washington, DC. “Biden is going to attend our Noon Mass! …do you feel safe to come in and play?”

I hadn’t had coffee yet, but I was suddenly alert. Given the commute, I had minutes to make the decision. I hadn’t been to Mass in months. I asked about the safety precautions. Everyone, including the priest would be masked and distanced. I would be in the corner behind the piano, next to an industrial strength air purifier. Only the cantor would sing, while wearing a mask.

I said yes, donned clothing suitable for church and the heaviest duty mask I owned that I could still play in, and headed to Georgetown. From the second I walked in the door, despite the Secret Service agents conducting security sweeps in the sanctuary, I felt like I was coming home.

There are two stories here for me - how I became a parishioner at Holy Trinity in the first place, and how being a church musician has become an indelible part of my musical identity.

I first started playing at Mass as part of the Newman Campus Ministry as an undergraduate. Music ministry became a welcome refuge from the competition and stress of a conservatory. Rather than feeling constantly judged by what chair I sat in in orchestra, there were no chairs, just a few of us trying to make sure we all had space to play! Rather than an audience to impress, there was a congregation to pray with through music. We were often sight-reading, or received the music just shortly before Mass started.

Occasionally we were asked to transpose to a different key to match the singers. Being a church musician requires knowledge of the function of each piece of music in the service, constant awareness of what is happening during the service, and being ready to play anything at a moment’s notice. This training served me well last week. I had very little warning and no rehearsal time before I found myself playing in front of a (masked, distanced) congregation that included the President.

I’ve been a parishioner at Holy Trinity since I graduated from college in 2010. Despite growing up in Northern Virginia, I didn’t know Trinity existed until a spiritual director of mine in college recommend it to me and my family.

After graduate school, I wasn’t sure what, exactly, I wanted to do with my music degree and Trinity gave me a space to play and music gave me a way to belong to my new church. While at times being known primarily as “the violinist” in the church community could be frustrating, ultimately, I took refuge in the corner by the piano. I’ve also grown as a musician by working with our music director, who is a skilled singer and pianist. I have learned so much about phrasing, expression, turning a musical line into a prayer from her, and the generosity of spirit it takes to share music with fellow worshippers in our church community.

Last Sunday, in my familiar corner at church, next to a very professional looking air filter, I felt a sense of peace and joy that had been missing for the better part of a year. Our ensemble for the Mass was a small one: a pianist (our music director), the cantor (the only person who sang during the whole Mass), and me, the violinist.

As I started to tune my violin, I realized I hadn’t heard it in a hall or a church for nearly a year. I had forgotten how beautiful it sounded. I’ve gotten so used to hearing it in a carpeted, small room or through the internet that I’d forgotten what its true voice is. I hadn’t seen or heard my friend play piano or sing in-person - or played with a pianist in-person myself. We started to play the prelude music and I felt a part of myself become whole again. The experience of feeling the vibrations of the music in the very air of the room, hearing the sound bounce back from the other end of the church, and the exquisite beauty of having another musician’s energy to share, feeling connected instead of like I’m forcing energy into the void of the internet…well, I was about in tears before Mass began.

I held myself together (I do have some experience crying both while playing violin and through worship services, though for different reasons!) and as we began the entrance hymn, President Biden entered with his family and surrounded by Secret Service. I could just about glimpse him in the back of the church where he sat with his family. Security aside, last Sunday felt like any other Mass at Trinity. No one had known until a few hours before Mass started that he planned to attend. Aside from the priest including a special greeting to the President, it felt like a normal Mass. And, well, I do confess that my hands felt a little extra shaky and I may have missed a note or two (I’ll blame the fact that I was sight-reading) as the President walked past my corner after Communion. I read in a Washington Post article later that afternoon that when asked by a reporter how the service was he replied, “lovely.”

Reflecting on this experience has helped me realize which parts of my musical and spiritual life are the most meaningful for me, and has given me hope for a future that includes many more healing in-person musical experiences.

P.S. Earlier articles reported on a special Stradivarius violin loaned to the violinist who performed for Mass on Inauguration Day - if anyone is interested, I was playing my own instrument, made in 2008 by American maker Tetsuo Matsuda.

January 31, 2021 at 09:30 PM · Claire, this is truly wonderful on so many levels! I'm thrilled you had this experience and I'm grateful that you took the time to share it.

February 1, 2021 at 06:14 PM · There are no small performances, but there certainly are big ones. Sounds like a fun opportunity!

Quite a precedent for a President.

It's a truly indescribable experience when playing or offering Music for a President of The United States of America! Claire Allen was blessed being invited by the Holy Trinity Catholic Church in D.C., Music Director and in such last moment's notice to play her Tetsuo Matsuda modern violin in a beautiful holy sanctuary ~

It was truly of interest when reading her words regarding 'being the Church violinist'!! Yet she said things which resonated with one's pre-teen experiences playing Unaccompanied Bach for Church Services in a hamlet suburb of Los Angeles, & with my pianist Mother, Betty, accompanying whenever Bach and other Religious works required violin with piano. One had feelings of an inner security minus the 'pressure' (which Claire mentions) of public performance by one's peers, class-mates, Musical Camp-mates and before public secular audience's ...

First in order is to congratulate Claire Allen for jumping back in to the deepest end of a mirrored to music 'swimming pool' and 'diving' off the board not having done so for a full Year! Please accept sincere compliments for your Courage, Faith over Fear, and musical holiness without 'bling', i.e., TV cameras or other radio on-air recording microphones to distract from The Holy Sacrament of The Mass In Praise of Our Saviour ~

Never having mentioned this before, the subject of spirituality in Music has not been thought of as a 'centerpiece' of violin or instrumental performance, yet during my private study tutorials in London w/Icon Master Violinist, (Heifetz's peer, Milstein), Mr. Milstein brought forth spiritual elements in the Music of Johann Sebastian Bach, speaking softly re the utter relevance of the spiritual with the musical and most emphatically in J. S. Bach, whether in the Solo Violin Sonatas & Partitas or in his b minor Mass, St. Matthew Passion and numerous Hymns composed yet not titled as such by Herr Bach, who was in the employ of The Church almost all his composition life ... Mr. Milstein, later on, proceeded to RX a very unusual way of staying close to a non disclosed spiritual faith via yet another {surprising to me} quiet source while living in London, which one presumed he also paid homage in the privacy of his Chester Square home.

It certainly makes enormous differences in the 'way' one does make music when offering all Up minus true absence's of 'ego' or 'artistic license' often attributed to adornment when 'Simple' is a Violinists' Mass ...

I'm sure young Claire would agree with some of what is being gently hinted at here having been in a Catholic Church setting most of her life! And to be clear, Milstein didn't have any need to go into much with regard to a particular faith because The Music could and can and will be made known to all people in a House of Worship ~ (In this vein, I'm sure new President Biden was very moved by the violin strains coming from a far corner behind the piano!) In Keeping, the unexpected rare 'calling' needn't be 'advertised' because as the late Mother Angelica of EWTN would often say, 'God hears our Prayers no matter from where they come.' {Oddly, I mentioned to the person closest to me just a week ago, wishing to visit Plains, GA, to hear our former President, Jimmy Carter preach, offering a movement of Bach in former President Carter's Place of Worship on a Sunday in this 2021 year ...}

Performing for President Carter & his Guest, French Premier, Raymond Barre, in The White House for The State Dinner held honouring The French Premier, was a vastly different 'feeling experience' & occasion than dear Claire Allen's Sunday Last unexpected joined in prayer thru Music and mutually shared Catholic Mass attended & in Holy Communion while President Biden worshipped ~ Perhaps our Nation thirsts for J. S. Bach's Music in Church as necessary medicine to heal the profound wounds incurred through such acute divisiveness in part of the Pandemic Year '20, now reaching in to Circa 2021 . . .

As from ~ Elisabeth Matesky in Chicago

February 6, 2021 at 04:29 PM · Thank you for sharing. Praying that you have many more blessed opportunities. There is nothing like being a part of the worship and music in a resonating scared worship space. Thank you also for being vulnerable in sharing. Praying much joy and peace to you as well.