Scales, Vibrato and Franz Drdla's 'Souvenir': Event 4 of the Violympics

July 31, 2020, 3:25 PM · We’re past the halfway point in Violympics, the Olympic-themed violin technique course designed by Los Angeles Philharmonic Associate First Concertmaster Nathan Cole. The 12-week program is designed as six two-week events, with each event exploring specific aspects of violin-playing. Besides my degree programs, this is the longest course or summer program I’ve ever taken, and it is definitely a marathon. During these last two weeks, I felt some fatigue setting in. 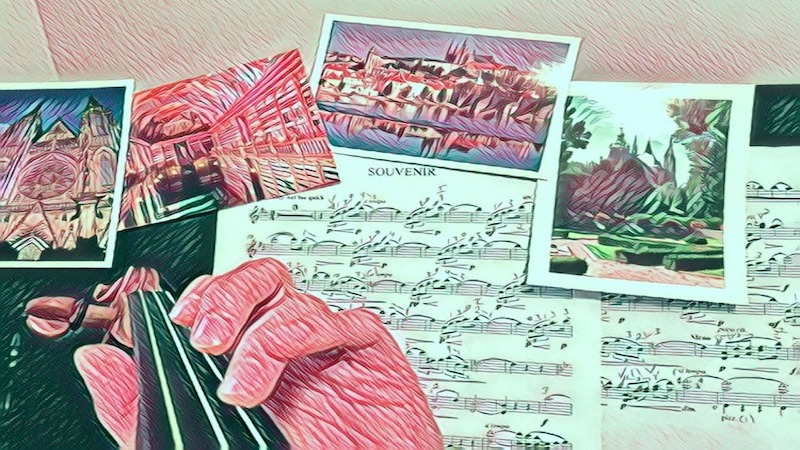 For this event, our first week covered scales and vibrato, and Nathan’s teaching brought some new practice techniques and slight adjustments to how I do and practice things. In fact, this is great week to get a taste of the Violympics in your own practice, as most of the materials covered are public domain and/or easily accessible, allowing anyone to follow along. Nathan also has free YouTube videos covering this week's main topics, so you can experience his teaching for yourself.

I found Nathan’s exercises with note grouping to be particularly valuable. Below is his YouTube video - choose either a two- or three-octave scale and give it a a try:

Our other technical topic was vibrato, with many exercises coming from Simon Fischer’s excellent book Warming Up. Nathan has used this book frequently during the course of the Violympics, and I highly recommend picking it up. (You can buy Warming Up here.) Below is Nathan's vibrato video, in which he also mentioned "Warming Up":

One vibrato exercise which was new to me this week was Nathan’s technique of vibrating one finger, then waving the finger which will play the next note around in the air (while still vibrating the first finger!) before playing it, and so on through a passage.

Each Violympic "Event" also involves a challenge piece during the second week, and this time it was Franz Drdla’s "Souvenir," a lovely lyrical piece which united many of the topics from both Event 3 and Event 4: shifting, scales and arpeggios, doublestops, and vibrato. After last event's wonderful experience with contemporary composer Max Raimi, this event took us back to the early 20th century and introduced us to this little-known Czech composer. "Souvenir" was written in 1904 and is one of Drdla's many light pieces for violin and piano.

The specific assignments from Nathan on this piece included finding vibrato on every note, including the doublestops, choosing old-finger, new-finger, or exchange shifts, and deciding the degree to which we would slide. One of my favorite assignments was to seek out historic recordings of the piece to hear different interpretations.

Below is YouTube playlist I made, which includes performances by Fritz Kreisler, Misha Elman, Maud Powell, Josef Suk and Efrem Zimbalist:

Here is my own performance, and I have to say I’m rather happy with the improvements made in my vibrato this week. I also experimented with some expressive shifts that used some of Nathan's shifting technique, and while I'm not completely sold on it, it was still fun to explore.

We’re on to Event No. 5 (and Week #9!) of the Violympics next … tune in later to read what happens next!