A Masterclass with Sarah Chang at The Manhattan School of Music 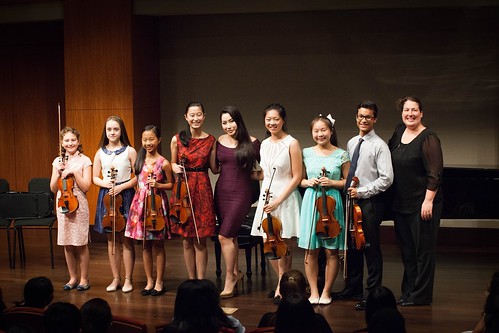 Sarah Chang with violin teacher Elizabeth Faidley and her students

On Sunday afternoon, the lobby outside of Miller Hall at the Manhattan School of Music was mobbed with the students and friends of Elizabeth Faidley, a violin teacher on the faculty of MSM’s pre-college division. The reason for the crowd? Superstar violinist Sarah Chang was on her way to give a master class to several of Elizabeth’s most advanced students.

Sarah, who is clearly idolized by these young violinists, heard seven of them play. She was warm and supportive of each student, sharing technical tips and advice for creating bold and persuasive musical structure.

First up was 11-year-old Abigail Yoon, who performed an excerpt from the first movement of the Mendelssohn concerto. Abigail, playing on a half-size violin, was composed and polished. 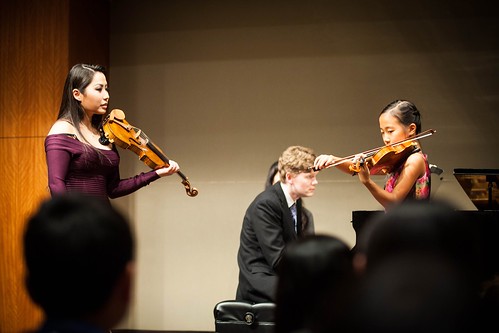 Sarah’s first suggestion for Abigail was about learning to tuning her own violin. “Embarrassingly enough, I never learned to tune my violin until I was about 11 or 12,” Sarah told the audience, citing the difficulty of turning the pegs of a small violin.  “My dad was a violinist, so he would always tune for me. Then I started doing all these concerts, and I didn’t know how to tune!” She encouraged Abigail to tune the A string slightly higher than the orchestra – or in this case, piano – to accommodate for strings going flat as they are played.

Throughout the class, Sarah asked the students to clarify their intentions for a phrase – asking which note they thought was the most important. “There’s no wrong answer – but make sure that it sounds like that’s what you planned to do, and not just because the bow decided to go that way.”

Next was 8-year-old Leandra Wyrick, who played Kreisler’s “Tempo di Minuetto”. The youngest student of the class, she played with a clear tone and a good center of intonation.

Sarah re-oriented Leandra on the stage, turning her to face the audience. “You’re playing facing Michael [the collaborative pianist] – and he’s very handsome,” she said, to chuckles from the audience. “But make sure that you play facing the audience, because we’re here to see you!” 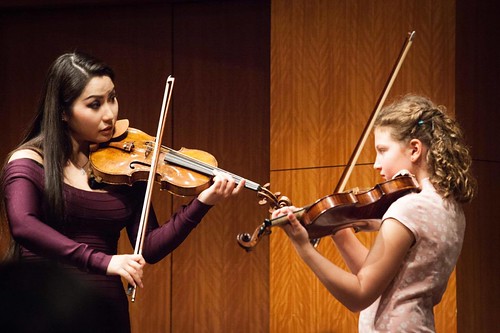 On the trills that pepper the movement: Sarah asked Leandra to widen the space between the notes. “When you trill, the upper note of the trill often sounds too flat. Think of overshooting the top note. When you play it slowly, it sounds out of tune – but when you speed it up, it’s in tune.”

Isabella Valcuha, 12, performed an excerpt of the second movement of Mozart’s Concerto No. 3. Sarah began by complimenting Isabella on her elegant approach. She encouraged her to use more bow contact at the opening. “Push it to the point where it’s still not forte, but it has a little more contact with the string.” Isabella immediately produced a more focused, alluring tone. “So much better!” Sarah exclaimed. 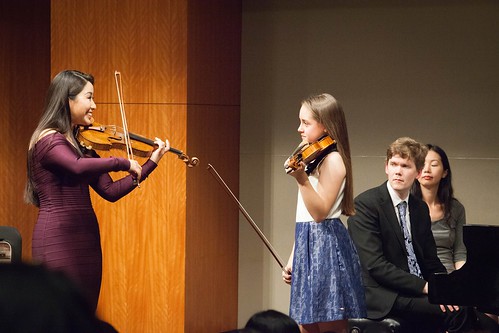 Continuous vibrato was a recurring theme of the class. Sarah worked with Isabella on vibrating the “little notes” of a phrase. “Just two little wiggles,” was all she asked for on a string of eighth notes.

14-year-old Chelsea Xia performed the first movement of Vieuxtemps’ Concerto No. 5. Chelsea rose to the challenge of this very demanding piece, with gutsy playing and great presence on stage. 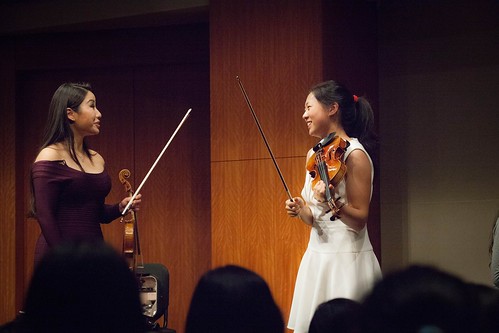 Sarah complimented Chelsea on her “perfect vibrato”. (Coming from Sarah, whose old-school vibrato is the envy of many, that’s saying something!) She discussed the pacing of the opening of the movement, encouraging Chelsea to experiment with rubato. “Sometimes there’s strength in pulling things back.”

They discussed how to deal with wolf tones – a vexation for all violinists, especially in a piece like the Vieuxtemps, with so many notes high up on the G string. “Most Del Gesus have a wolf on the C on the G string,” Sarah explained, demonstrating on her own instrument. “I avoid it by playing slightly sharp. It means playing out of tune, but if I have to choose between that and the wolf, I’ll take out of tune!”

Nicholas Abrahams, 16, played Introduction and Rondo Capriccioso, by Saint-Saens. He played the melodic introduction with sensitivity and expression, and he had an impressive ricochet.

Sarah reminded Nicholas to make extreme contrasts for the sake of the audience, particularly the people sitting in the back. “I can hear it here, standing in your circle, but the audience needs to really hear it.” 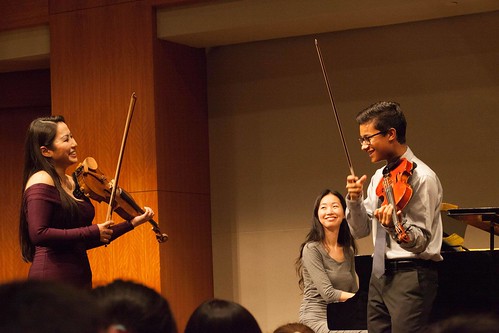 They focused on the ad lib passage, before the Piu allegro section, with many chords in a row. Sarah asked Nicholas to work on rounding his chords, to avoid hearing a chord evenly divided into two strings plus two strings. “It sounds incredibly precise, but it’s almost mechanical.” She also asked him to vary the length of his chords, to create more flow. “Otherwise, the entire thing seems like it’s 3 hours long!” Nicholas played it again, taking her advice, and the passage became vivacious and compelling.

Sixteen-year-old Coco Mi performed Sarasate’s devilishly difficult Carmen Fantasy. Coco played with fire and commitment to the character of the music, but Sarah wanted more. “Just go for it. There’s nothing shy about this piece,” Sarah said. “It’s obnoxious. It’s okay to be a little too loud, a little too aggressive.” 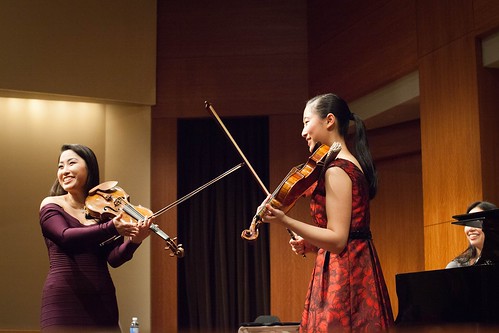 In the section with the infamous thirds, Sarah reminded Coco to create longer lines. “I know it’s ridiculous to think about lines when you’re playing like, six thousand chords,” she said, but she wanted Coco to have more shape and structure, and not play carefully. Coco played it again, and the phrase leapt to life (and was still perfectly in tune!)

The last performer of the day was Sarah Ma, 13, the recent prizewinner of the MSM Philharmonic concerto competition. Sarah played the finale movement of the Tchaikovsky concerto, with ferocity and musical maturity. “Guess what…I have nothing,” was Sarah’s only comment. I guess she was impressed as the rest of us! 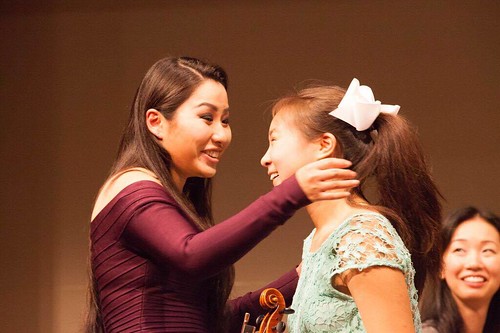 The class ended with a Q&A session. “What do you think about while you’re performing?” a student wanted to know. “Where I’m going for dinner afterwards,” Sarah joked.

“Most of the time I’m thinking about ensemble – being together with the orchestra. By the time you’re at the concert, you have to trust your preparation, and believe that you’re going to be fine. While you’re on stage, it’s about chemistry.”

Another student asked, “How do you deal with nerves?” I have to wonder if Sarah Chang even gets nervous anymore. Again, she emphasized the importance of trusting your preparation. “I love performing – I much prefer it to the practice room. You get to share everything you’ve worked on for months. Just accept the nerves – they add excitement to the performance.”

The last question was a request for advice for young violinists. Sarah warned of the side of the music industry that many violinists don’t like to think about – the business. “At the beginning of my career, I naively thought that it was all about the music. Nobody sat me down and explained that running the life of a soloist is essentially like running a small business.” She also advised keeping supportive people close, “Always have someone that you trust – a teacher, parent or friend – that you can go to for advice.”

I'll drink to that.