Time for Three at Joe's Pub

Wish me luck - on Friday, I’ll be undertaking my first long solo drive (12 hours!) from Philadelphia to Maine. I’m going to Kneisel Hall, a summer music program where I’ll be spending 8 weeks playing my all-time favorite music (string quartets, and other chamber pieces!). My fellow musicians and I will really get to know each other, during our several daily hours of rehearsal. It’ll be intense…and I can’t wait.

During most of the year I live in New York, but I’m leaving town for the summer. So if you can get yourself to Joe’s Pub on Monday night, I’ll be jealous – because you’ll get to hear the three virtuosic, innovative, and very charismatic members of Time for Three (violinists Nick Kendall and Zach De Pue, and bassist Ranaan Meyer). That’s a treat in itself, but there’s more! You’ll hear selections from their eponymous new album, to be released on Tuesday. 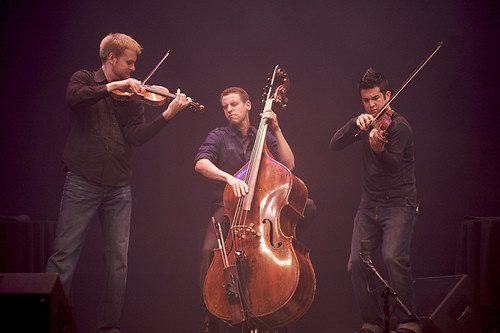 The album, on the Universal Music Classics label, features Time for Three’s distinctive, classical crossover sound – lush, interwoven strings melodies, with bluesy scales and jazzy riffs. The album Time for Three features guest artists, varying in their style and genre – on one track, Tf3 plays with superstar cellist Alisa Weilerstein; on another, with singer/songwriter Josh Radin, on a version of his heartbreaking song “Winter” (one of my personal long-time favorites!) 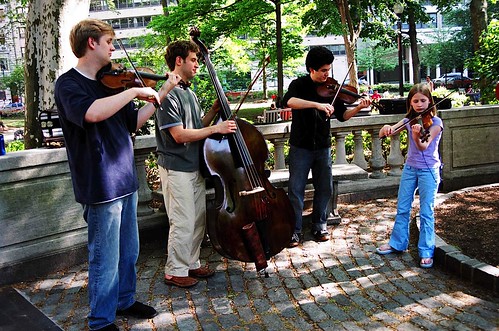 Me, playing with Time for Three in Rittenhouse Square, about 10 years ago!

Time for Three are undoubtedly “thought-leaders” in classical music, and are setting a wonderful example for the next generation of classical music. They’ve taken their impeccable classical training and created something new with it – something people love – the new album charted on iTunes classical a week and a half before its release date. Pretty amazing stuff.

From Laurie Niles
Posted on June 19, 2014 at 4:39 PM
I wish I could be at Joe's Pub, too! But I have good news for Time for Three fans; next week on V.com we'll have a big feature on them (three-way interview, wow!) and we're going to give away three copies of their album. And I've heard the album, love it!

Have a safe trip to Maine, Caeli!