In Appreciation of Composer William Schuman and His Violin Concerto

Writing in Washington Post in 1992, the critic Joseph D. McLellan asserted that although Schuman never achieved the name recognition of his colleagues Aaron Copland and Leonard Bernstein, he "probably had a stronger and more durable effect on American musical life." (Source: The New York Times.)

Sometime in early 2000s when I was still a student at the Juilliard School, I was asked to step in on a short notice for a performance of Schuman’s Violin Concerto with the Mexico City Philharmonic and Maestro Jorge Mester.

I immediately accepted, believing that it was Schuman with two "nn's," aka Sir Robert. To my great surprise, when the music arrived, I discovered on the cover the name of "William Schuman." I thought there must have been a mistake. 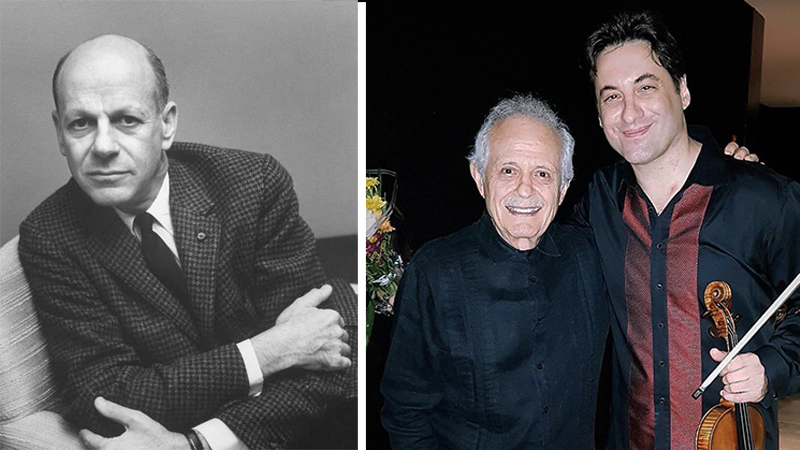 Upon opening the parcel with the music, I was rather shaken to realize that there was a very complex contemporary score in front of me, something I barely had any experience with at the time, growing up on mostly Romantic repertoire. Nevertheless, as I had already agreed to perform it, I decided that this was a good challenge and embarked on a grueling schedule of learning the new piece, practicing about nine hours every day. Or at least that's what it felt like!

Fast-forward: four weeks later, onstage in Mexico City: I must confess, it was not love at first sight. I did not quite love the music and did not feel that I built a good relationship with the work.

A few months later - another offer came: to make a debut recording with Bournemouth Symphony Orchestra that would feature this Concerto for Naxos’s American Classics Series. I was disappointed, as I had always imagined my debut recording to be of the Romantic violin concertos I grew up with - Tchaikovsky, Mendelssohn, Bruch. But after some contemplation, I felt that perhaps this could be an interesting and different recording path.

It was during those recording sessions when I started to realize what a monumental work this Concerto is and how brilliantly it is orchestrated. Cleverly interwoven melodic lines strongly lie on harmonic foundation with a very challenging and virtuosic violin part. Perhaps Isaac Stern had something to do with that, as he was the work's first performer with Charles Munch conducting Boston Symphony Orchestra:

"William Schuman's Concerto for Violin and Orchestra, a sincere, moving, original work, received its first New York performance last night at Carnegie Hall at the hands of those who offered its premiere recently in Boston - the soloist Isaac Stern and the Boston Symphony, under Charles Munch."
- New York Times, March 16, 1950

Even though the Concerto perhaps is still rather underrated, it remains one of the great American Violin Concertos. It is an absolute master piece that I love to perform. Have you heard William Schuman’s music? Do you know his Violin Concerto? Here is my recording, please enjoy!

"William Schuman was a very special, as a composer, educator, administrator and cultural advocate. He was also a person of great wisdom, charm and wit. A truly special human being."
- Morton Gould

August 5, 2022 at 08:36 AM · thank you Philippe for this very interesting article! so sometimes a typo is not a typo after all :-) it's a beautiful concerto (played beautifully too!)

This work was unknown to most in London, and throughout the UK, until my friend - globally renowned Master Violin Friend & Colleague, (under the same Concert Artist Mgmt in London/all Europe) Great Violinist, Henryk Szeryng, gave its London in the Royal Festival Hall Premiere in mid-later '70s or very early 1980s.

Attending the Szeryng Concert, one was completely uninformed about the William Schuman Violin Concerto, & upon 1st hearing Henryk Szeryng's Performance with, I think, the LPO, Conductor (at moment not recalled), one had a rather 'Blah' and wondering response to the Violin Concerto ... It was & on a first hearing to myself, a bit greyish coloured, harmonically speaking in the Violin Solo part, and if any artist could lift it up, it would have been Henryk Szeryng, emboldened with a huge sound permeating London's RFH despite obstacles in the acoustic's due to so much carpeting, etc., and at that time. It is said, 'Honesty is the Best Policy', so one must confess not having been terribly attracted by the work as a whole, 'me-self' {London Cockney-speak!} ...

It would be a great help to all Violinists if Philippe Quint's true enthusiasm & love for this fine Violin Concerto, brings an extra dimension to the piece which he has come to love! It is said by Sage's: 'what you Love, loves you back' ~ In this regard, as one veteran violinist to the younger Philippe Quint, do keep performing the William Schuman, to draw many younger audiences into the Fold!

A Word: when Henryk Szeryng did offer the work a First Time in London, his vibrato was widened and with an even Broader Plus Sound which was difficult to imagine until heard, Live, by myself, {HS TV recording-mate in a 2 violins concerto} and prior to his bold London Schuman Violin Concerto offering ...

It was/is lovely viewing my friend & Conductor, Morton Gould's Quote re US Composer, William Schuman's Composition! I knew Morton Gould quite well, working with him in Chicago and Rockford, as his Concertmaster in latter years ~ He was a true blue New Yorker and an engaging person when getting to know him over English Hi Tea's followed by regular mutual correspondence ~

~ Yours musically from Chicago ~