Holy toledo, what a week!
I don't even know where to begin...everything's been absolutely crazy...

Well. Saturday was the big concert with the Naples Philharmonic Orchestra. I was feeling pretty nervous before hand, but you know, once you start playing, it just gets better instantly. I was pretty happy with what I did, although, after listening to the recording, I can hear all sorts of room for improvement. But my teacher tells me that I get more self-critical with each concert because my ear is developing. So after I played, the stage people let me run up to the box seats so I could listen to and watch Sam play. He sounded just splendid, as always. Afterwards, we drove back to the clubhouse, where our parents threw a smashing reception.

On Sunday, the two of us had another concert at the Phil with the youth orchestra. Again, Sam and I had solos, albeit minor ones compared to what we played Saturday, and the sounded pretty darn good. It was Ms. Otranto's last concert with us, so it was a rather sad night (at least for me). She's really worked so hard with the Youth Orchestra and fought so hard for all sorts of things for us, like the concerto competition and chair challenges...frankly, if it hadn't been for her, I probably wouldn't have become concertmistress or ever played as a soloist. So, at the end of the concert, with Chelsea sobbing across from me, and Ms. Otranto starting to cry, I was getting pretty sniffley myself.

Today, I had my "post-mortem" lesson with Mr. Neal, and he gave me my new repetoire for the summer. Basically, over the summer I'll work on Viotti's Concerto No. 22 (which is ridiculously difficult and sounds like a breeze...I hate when that happens) and some Bach partitas. Then, during the school year, I'll probably keep working on the Viotti and Bach, add Lalo's Symphonie Espagnol (for the concerto competition), and begin *drum roll* some Paganini Caprices. I certainly will be busy next year!

I think that about sums everything up. I'm going to (try to)post one picture (my favorite) from the concert on Saturday.
Take care all! 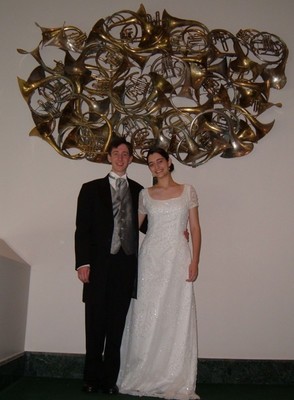 haha! I bet this is really annoying!