Even though it’s only mid-summer, the sun still high in the sky, I’m starting to feel that hunger, for summer to shift into fall. I’m craving a return to fall activities, cooler weather, the new symphony season. As always, I’ve tweaked my subscription to incorporate both daytime performances (easier drive to/from my home in the mountains) and Saturday nights (staying in San Francisco afterward—my personal favorite). But the issue the Saturday night attendance raises: to eat dinner before or after? And what? Dinners are such a celebration for me on other weekend nights. I take my time preparing and consuming them, accompanied by wine, background music, company, a 5pm to 10:00pm process. I hate eating early, eating quickly. But for those infrequent Saturday nights at the symphony, I tend to do just that.

It started me wondering what performing musicians do. In my own performing days, mostly dance, mostly back in my early twenties, my fellow performers and I would eat lightly beforehand and throw together dinners afterward, festive occasions, sometimes not eating till after midnight. Great fun. Performances were seasonal, with short runs, which was probably a good thing. But what about professional musicians whose weekend nights regularly entail working through those dinner hours? What do you eat, and when? Particularly if you’re a foodie, like myself, who reveres the dining experience?

I found a partial answer and a lot of fun stories and recipes in a cookbook called Culinary Harmony, created and edited by cellist David Rezits. 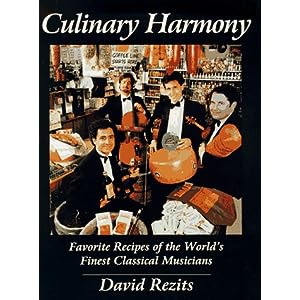 In this book he’s collected favorite recipes from 200 classical musicians around the world. Each entry gives a bio, often includes an anecdote, a flavor of their world, and follows up with a recipe or two. As well as loving food, I love books, and perusing cookbooks is huge fun (made more so if a bottle of wine sits nearby).  Add the classical music world to the equation and I’m all over it.

Here are a few of the recipes I have tagged to try. Warning: reading this may make you very hungry…

*Garlic soup (contributed by Yehudi Menuhin) This is twice now I’ve seen the recipe, the other in an esteemed cookbook, and both authors assure me that it’s got a creamy, smooth taste, not a “garlic” taste. Time to give it a try.

*Poached Dishwasher Salmon (contributed by Eudice Shapiro) The title says it all. Oh man. I can’t not try this one. What a story to tell my guests… after they’ve eaten it.

*Pâté de Foie de Volaille (contributed by Joseph Flummerfeld) Every now and then a craving for a good chicken liver pâté just overcomes me. Homemade tends to be the best. As does the Very Fattening variety. Which is why I’ll also have to try Itzhak Perlman’s recipe for Very Fattening Chopped Chicken Livers.

*Red Lime Chicken Fettucini (contributed by Thomas Bacon) Again, the combination of flavors in the recipe sounds too tasty to resist.

*Potato Crusted Chicken (contributed by Yolanda Kondonassis) – You shred the potatoes hash-brown style and press into the chicken (first prepped with a mustard/garlic paste) before baking. Ooh, the smell alone wafting from the oven will win me over.

*Ropa Vieja, which translates into “Old Clothes” (contributed by Manuel Barrueco). Again, the name has sold me. And the recipe— flank steak, cooked in veggies, garlic, wine, then shredded—looks like a winner too.

So. Now I know what at least 200 professional musicians like to eat. But back to my original question. When? If you regularly perform during dinner hours, how do you handle the eating thing? Particularly if you are a foodie, and, like myself, live to eat. Do you have a favored post-performance meal and time? A good recipe to add to my collection? I’m all ears (and stomach).

PS: If the aforementioned recipes have you drooling and you’d like to acquire your own copy of Culinary Harmony, author David Rezits has offered a 20 percent discount to V.commers if you order the book through him. His email address is drezits(at)yahoo.com or you can contact him on Facebook. Amazon stocks his book, as well.