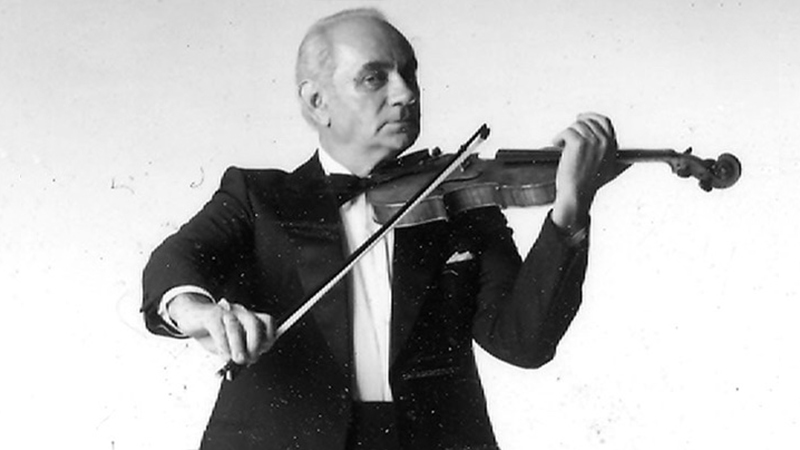 For this writer, violinist and good friend of Daniel, this was very sad news, as we all expected him to be performing his breathtaking performances for many years to come even at the age of 96. No violinist lived to his age while retaining his extraordinary technical and musical abilities. I had the privilege to videotape at least 30 of his performances over the last 30 years including the last amazing virtuoso performances.

Born in Odessa, Daniel was a student of the great Russian pedagogue, Piotr Stolarsky, teacher of legendary violinists Misha Elman, Nathan Milstein and David Oistrakh. He then continued his studies with David Oistrakh.

After receiving his Masters Degree from the Moscow Conservatory, he served as concertmaster of the Bolshoi Theater of Opera and Ballet until 1975, when he moved to the United States. Here, he was concertmaster of the San Francisco Opera Orchestra, LA Chamber Orchestra, and he also performed with the Master Symphony Orchestra and Seattle Symphony and many other ensembles while maintaining an active solo career. He was a recording artist with the film industry in Los Angeles for many years.

His solo playing included astonishing programs of the most demanding virtuoso works for the violin from start to finish - even at the age of 95. Most violinists would be happy to include one of these compositions at the end of a program and never attempt to perform a complete program of such virtuoso works for violin. He was so relaxed while playing this repertoire with old school romanticism, incredible staccato runs, double harmonics, left hand pizzicato and an elegant stage presence that must be witnessed to believe. 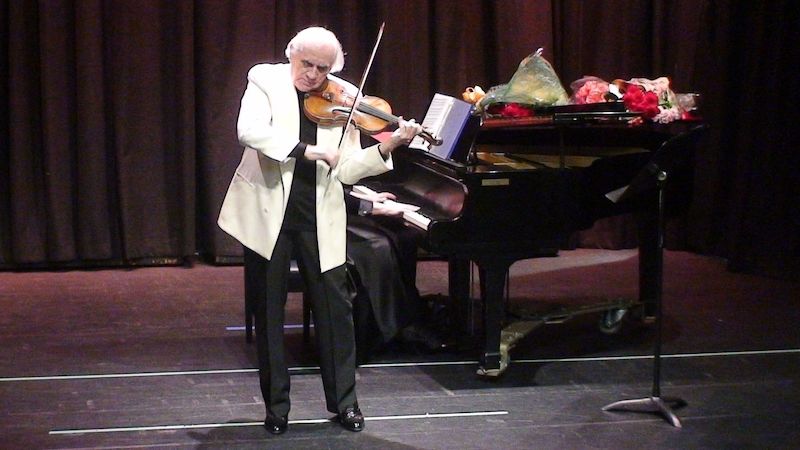 Violinist Daniel Shindaraov, playing in a recital at age 90 at Temple Emanuel of Beverly Hills.

A typical review would state "Spontaneous displays of astonishing virtuosity, bravura, stylish musicality and incomparable playing." I first heard him with the LA Youth Orchestra conducted by Mehli Mehta about 30 years ago, when he performed the Paganini Violin Concerto. I have been a Shindarov addict ever since. He often performed the Tchaikovsky concerto with various California orchestras, including an extraordinary performance at Disney Hall.

To spend social time with Daniel was a privileged experience. Always immaculately dressed with a consummate memory of the history of his times and vast knowledge of the violin, he regaled one with incredible stories and with a great sense of humor. And there was always wonderful Russian food. His condo was like visiting a great Russian palace with astonishing antiques and photos of his many famous friends, colleagues, composers, musicians and conductors. His wife Sophia Moyakukla told us that he heard Heifetz for the first time in Moscow at the age of 10, and he was his friend in LA. Heifetz always remembered the boy he met. He often performed on the wonderful Stradivari and Guarneri del Gesu violins owned by dear friends, Dr. William Sloan and professor Judy Sloan.

Daniel’s father was said to have lived to the age of 115. Had it not been for COVID and other last-minute issues, Daniel certainly would have come close. Even at the age of 95, he continued to practice four to five hours per day while still arranging new amazing virtuoso pieces for the violin. He was tireless on stage. A typical encore would be Rondo Capriccioso by Saint-Saens and with Daniel’s signature extra arpeggio flourish.

I was working on a tour for him in Japan when the pandemic closed our industry. Please keep his memory alive and do take the time to visit his website, Shindarov.com, and watch the many videos of him performing live on YouTube - here is playlist of more recent performances he gave in his 90s.

It is delightful yet poignant to read 'pal', Geoffrey Maingart's, loving Tribute to the rare Violinist in the name of Daniel Shindarov, who unknowingly broke violinistic records never

imagined nor 'recorded', yet simply followed his own 'Yellow Brick Road' & even far ahead of the famed Movie, 'Wizard of Oz', becoming reality and famed Ballads composed to utter enchantment of all Movie goer's the world over, singing the Song of Dorothy, the Lion, Tin Man and the Scarecrow, happily joined together on their way to see The Wizard for various and sundry cures for lack of's Courage, Stiff joints {in today's lingo, arthritis!} and a Heart, all the while helping new friend, Dorothy & her dog, Toto, find their way Home to Aunt Eim & Kansas!!!

What seems incomparable, now looking back, is the pure love of fused will determination of an almost obsessed with Violin Playing somewhat in the background Violinist, who devoutly

practised every day and fastidiously with attention to all tiniest details near relentlessly yet no sense of this due to the need, inside, to play music for any & all who loved music as himself!

It is said: 'A bird doesn't sing unless it has something to say in Song'! I believe a loving his violin & music it could reproduce, Daniel Shindarov, had many lifetime's of music to share with other's because his non stop love affair with aspired perfection on the violin to enable a 'Next Time I'll do it better' Mantra and love affair with great violin repertoire and uncovering countless secrets of navigating the Instrument and Violin Bow were too enthralling and 4 or 5 hours 'work' pr day were 'Play' for Daniel Shindarov, always anxious to see what a next day of practise & public performances (no matter where or with whom) would bring! Practising was Daniel Shindarov's addiction, i. e., aka, technologically 21st Century-Speak; his 'Facebook' where he and his violin could communicate intimately with aspired to/for violinistic artistry'd perfection, & as one so extremely involved, continuously returning back to 'Edit' a Post to better it even at 5:00 AM not to impress, but to Get It Right never noticed the hours on the Violin, aka, then finest computer Post!

In a Final Analysis, pupil of Stolarsky, {first teacher of Nathan Milstein, followed by Auer study}, and later, David Oistrakh, yet birth born a touch too late to Auer study, yet second mentor to

{I'm sure keen to absorb all} pupil, Daniel Shindarov, became a conglomerative ideas Apostle of 2 Giant's who represented the Best of Stolarsky, Leopold Auer and David Oistrakh's own Individual Style's, and All Flower Sifted by Shindarov, over an even 3/4's of a Century Thought w/work to back up every idea

all Shinderov violin technique's and musical approach were in being a near Centurian accumulation of Up Close & In Person Musical Contact with his Mentor's and Father Time on his side to experiment in concert and back to the fingerboard & bow for further improvement never with {I suspect} One Thought of 'retiring' for having a father passing at aged 115, thusly Daniel Shindarov, had a rarely experienced perspective on Life and saw it not only possible but probable that he, son of, Daniel Shindarov, would play in public until the Cows, literally, came Home & Afterward!

If I may, it seems the close friend of Daniel Shindarov, Violinist Geoffrey Maingart, might contact The Guinness World Book of Records to allure them into writing about the 'Longest Distance

Violinist Runner in The World" who played all most demanding virtuoso violin repertoire of globally renowned Great's of The Violin, until his 95th year public concert violin career and until

God summoned His Servant Home at a 'young age' compared to Poppa Shindarov, at 98!

Totally impromptu tonight on November 18, 2021, it is my hope to add a violinist's outside View of newer to me Violin at aged 95 Master, Daniel Shindarov, following all 'insider' truths of the lifespan last 30 plus year Chapter's, Geoffrey Maingart, closest friend of a wondrous Life Servant of Classical/Romantic Music and truly Lived Beyond Overview of Johann Sebastian Bach ~

be honoured as The Last of the Greatest Violinist 'Moheekins' & Forever More ... R I P ~ dear Maestro