First, the playing: a film about her was aptly entitled: I AM the Violin. And she was! The violin was her life; she mastered it, devoted so much of her existence to it, cared so much about it. Every performance was an event, which she took absolutely seriously, giving each concert her all. She spoke through her violin, proved herself through it, lived within the music she made. She was a marvel, an icon; each note she played was the result of total conviction – and as a consequence was totally convincing. She had been groomed from the beginning to be a star – and a star she was.

But she was also an adorable person. I had heard of her, of course, from my childhood onwards – hadn’t everybody? But I didn’t meet her until - I think - 2000, when I attended a memorable recital she gave at the Wigmore Hall (apparently her debut there!), concluding with a magisterial performance of Enescu’s 3rd sonata. I’d heard, to my delight, that she’d heard me somewhere, and had liked it, so I dared to go backstage afterwards. Having enthused about her playing, I rather uncertainly told her that I was Steven. She looked at me disbelievingly. ‘You’re NOT’ she announced, in her wonderful deep voice. I assured her that I certainly had been last time I looked in the mirror. She accepted this, and proposed that we play the Brahms Double together. It was such an honour; but alas, I just couldn’t do the dates she suggested.

I came across her shortly thereafter, however, at the Verbier Festival. I’d seen that she was giving masterclasses there, so when I saw her, I asked how they were going. She looked at me severely. ‘Steven,’ she boomed, wagging her finger. ‘I don’t teach.’ I was puzzled; she was, after all, advertised as the teacher of the violin class. ‘So you like teaching?’ I said, provoking her. The finger wagged again. ‘Steven,’ she repeated with equal seriousness, ‘I don’t teach.’ ‘So how’s the teaching going?’ I asked. Her finger was on its way in my direction, and she’d started to say my name in the same tone of voice – when suddenly her face broke into a big smile. ‘Oh – so you’re a tease,’ she said. After that, we got on famously. My other main memory of that Verbier encounter was of her examining something – I couldn’t see what - in the hotel lobby, and then calling me over. It turned out that the object in her hands was an album of recent photos of her. ‘Look, Steven,’ she commanded urgently. ‘Don’t I look gorgeous?’

Later, we took her to dinner near her flat in London. Tottering through the streets in her high heels, she suddenly came to a stop in front of a (closed) clothes shop, where either a pair of gold shoes or a gold dress (I can’t remember which) had caught her eye. It was impossible to budge her, late though we were for the restaurant. ‘Wouldn’t I look wonderful in that?’ she asked us challengingly. We agreed that she would. ‘I’m coming back here tomorrow morning,’ she assured us. She spoke that night about her appearance. ‘You think I dress like this just to go out?’ she asked. ‘No! Catch me at breakfast – I’ll look just the same.’ Her pride in her appearance was never-changing. Perhaps in someone else it could have been too much – but with Ida, it was wonderful, admirable; life-affirming, in fact, like her pride in her playing.

It is funny that already I’ve seen two obituaries giving her age five years apart. She’d certainly have preferred the younger estimate… It was impossible to get the truth out of her. I remember asking another glorious violinist-character, Lorand Fenyves, whether he knew Ida. ‘Oh yes, of course!’ he replied. ‘I knew her when I was 16 and she was 15.’ He paused. ‘And now I’m 80 and’ his eyes twinkled, ‘she’s 55!’

Although we never got to play the Brahms Double together, we did perform the Beethoven Triple concerto with Martha Argerich and the Rotterdam Philharmonic under the then little-known Yannick Nezet-Seguin in (I think) 2006. Now THAT was an experience – to put it rather mildly… Playing with those two way-larger-than-life ladies was something not to be forgotten; the two adored each other, and it was great fun to witness their interaction. Ida had only played the piece once before, as I remember; but she played it with utter conviction. And Martha was – well, Martha. And Yannick kept the whole thing together, somehow. So – it was special…

It was supposed to happen again, in Miami (where Ida lived); but alas, it didn’t. Still, I kept in touch with Ida and on one memorable occasion got to interview her at the Wigmore Hall (there’s a recording of that occasion on Youtube). She also came down to Prussia Cove once for three days, her visit culminating in a breathtaking account of the Bach Chaconne (she sported an almost equally breathtaking dress to match!) at the Hall for Cornwall. We also played and taught/didn’t teach together in 2010 at the Summit Music Festival, just outside New York. That was another unforgettable experience. At the concert that concluded the festival, Ida played virtuoso pieces with the orchestra that would have been impressive in someone thirty years younger – even younger – than she was. But equally Ida-ish was the post-concert experience. 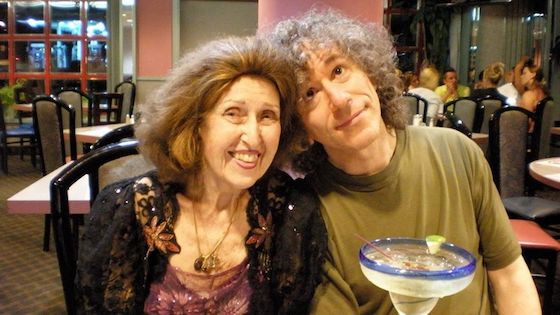 For some reason, it got very late, and it was well after midnight when we were taken in search of food. Not surprisingly, there were few options in the countryside at that time of night; but eventually we found a 24-hour diner. We went in and occupied a table. Looking around at the bikers and other rather unpredictable-looking types, I was a tad nervous; not Ida. I fortified myself with a margarita; she had tea. At one point, the conversation turned to Schumann, and his 2nd violin sonata (which at that time I didn’t know very well). I asked a question about it. ‘You want to hear how it goes?’ Ida demanded to know. She strode over to her violin-case, pulled out the violin, and to the astonishment (and then, luckily the delight) of the assembled company, began to play it. A photo taken at the time (below) shows me a little less than comfortable – and her absolutely in her element. 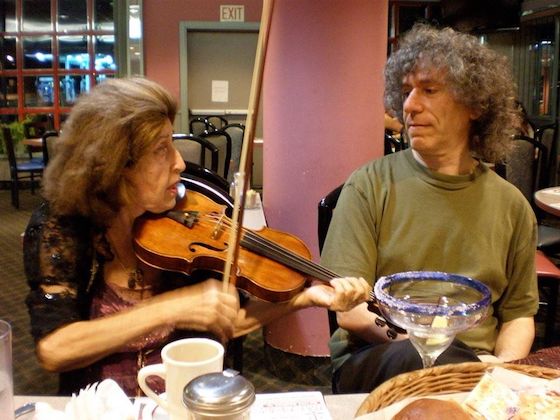 Oh, Ida. By the last time I spoke to her – too long ago, but not that long ago – I’d heard that she’d become very forgetful, so wasn’t quite sure whether to call her or not. But I dialled anyway, and the phone was answered. ‘Hello, Ida?” ‘Who is it?’ ‘It’s Steven – Steven Isserlis.” Silence – then the phone went dead. Oh dear. I tried again. This time I was able to hold her attention long enough to remind her who I was. We started to talk, and as the conversation progressed, she evidently remembered more and more about our friendship. It was true that she repeated herself a lot; but still – she was very much Ida, the same wonderful voice, the same love of life.

And now she’s gone. Farewell, Ida the legend; we humanoids will miss you – but thank you, thank you for giving us so much. Everything, in fact.

July 2, 2020 at 04:33 PM · Beautiful tribute! And so much more meaningful than reading a standard obituary. I never met Ms. Haendel, but I now feel like I know her and her love of life.

July 2, 2020 at 09:02 PM · Fenyves mentioned Ida's name with such reverence in a few of my lessons. He referred to her when discussing security of intonation and stylistic purity.

July 3, 2020 at 05:25 AM · Thank you Steven. It is interesting with Ms Haendel that all of us that have never met her love her for her recordings, and those who have mer her loves her even more for her quirks.

She will be missed.

July 3, 2020 at 12:42 PM · Yeah I can envision her being friends with Martha Argerich. Isserlis is in the same echelon when it comes to soulful playing. He and Argerich even have the same hair! Maybe there's something to that ... like Samson.

July 4, 2020 at 05:24 PM · So sad, but we will forever hear her music. Like the Britten Concerto. She was one of the few who could play the original version. She never settled for less. Neither should we. So never stop playing her wonderful performances and keep Ida forever alive.