May 20, 2021, 5:47 PM · EDITOR's NOTE: This blog was co-written by Alex Trouslot. Alex and Spencer are music education majors at Virginia Commonwealth University.

Two years after his sparkling New York debut, the then 12-year-old violinist Yehudi Menuhin played a concert alongside the Berlin Philharmonic with Albert Einstein in attendance. After hearing the prodigy give new life to concertos by Brahms, Bach, and Beethoven, the physicist would famously remark, "Now I know there is a God in heaven." In his earlier years, Menuhin (1916-1999) would find that most critics agreed with Einstein.

During Menuhin's formative years, famous works by Brahms, Bach, and Beethoven made up a large portion of the foundation for Western classical music, and Menuhin was aware of their far-reaching influence. That was why it was so interesting, as well as impactful, when he began to publicly eschew the traditional and turn to the alternative. 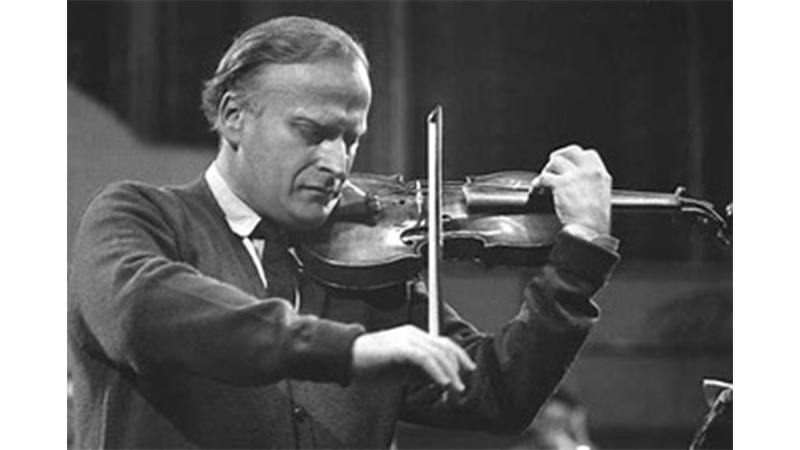 Menuhin embraced forward-thinking philosophies while also maintaining his status as an internationally-acclaimed violinist. He spoke at length about vegetarianism, yoga, and organic farming, on top of advocating for political causes such as Palestinian statehood.

This decentralization of the West through his public persona would also bleed into his musical life. His numerous collaborations helped to bring the violin into a host of other genres and social circles. He learned from the Roma people as early as age eleven. After hearing a group of violinists performing in a cafe, he asked to improvise with them. He had a penchant for improvisation, and it would become a required section of the Menuhin Competition, a violin competition which was started in 1983 by Menuhin himself. This year, the competition has been virtual, with some events taking place in the host city of Richmond, Va.. Finals will take place this Thursday and Friday.

To this day, the Menuhin Competition stands as a testament to Menuhin’s beliefs. This year, it has brought Argentinian music to Richmond, with the inclusion of Ástor Piazolla’s Histoire du Tango; a piece detailing the wild, wide-reaching, and often romantic evolution of tango as a required piece in the semi-finals. It has also brought jazz and fiddle music to Richmond through the Regina Carter Quartet and Mark and Maggie O’Connor concerts, through the lens of string music.

The Regina Carter Quartet played in the Competition’s concert cycle this past Monday, May 17th, and it can be viewed for free until May 23rd here:

Led by jazz violinist Regina Carter, the group displays effortless mastery of the genre and gives an inventive concert that wholly embodies the values of the Menuhin competition.

They were followed two days later by the fiddling duo Mark and Maggie O’Connor, who not only continued Menuhin’s legacy of dissolving the violin’s confines in classical music, but also emphasized Virginia’s rich history of fiddling. This concert can also be viewed here: