September 4, 2021, 11:21 PM · On August 14, at the age of 90, Igor Davidovich Oistrakh passed away. Igor was a world-famous musician, honored as a People's Artist of the USSR. He performed with the best world orchestras both as a violin soloist and as a conductor; and he taught as a long-term professor at the Moscow and Royal Brussels Conservatories.

Nevertheless, even today, almost half-century later, the most respected publications begin their story about the death of Igor Oistrakh with the words: "The son of the great violinist David Oistrakh is gone..." I question the ethics of of that -- certainly this an artist who stands on his own accomplishments.

Any son would need a great deal of courage and perseverance to keep to his chosen path, when inheriting his father's profession. In the case of Igor Oistrakh, we are talking about a father so successful in his profession, his name almost merges in our minds with the very concept of "violin." It is no coincidence Igor Oistrakh's whole life became a continuous exercise in overcoming. 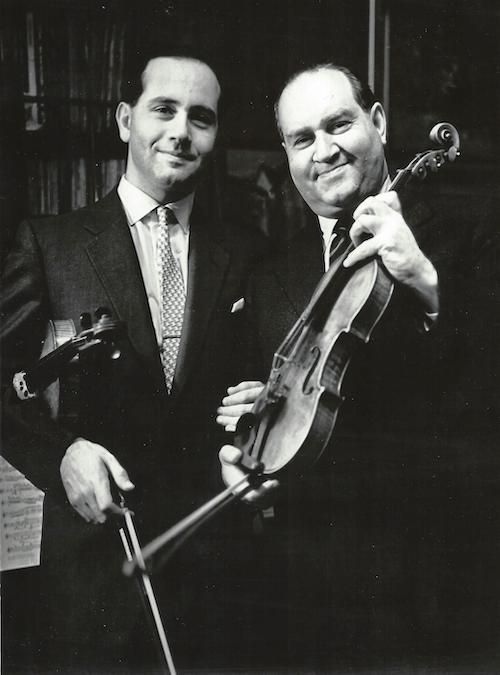 He had to overcome competitive, competitive barriers - the kind that are traditional for almost every young performer. Add to this the fact that the first two post-war decades in the USSR turned out to be surprisingly "fruitful" for violinists - producing outstanding artists such as Igor Bezrodny, Mark Lubotsky, Boris Gutnikov, Mikhail Vayman.

He also had to overcome psychological barriers - in the minds of those around him, who were distrustful of the dynasties in art (as if the world culture of the Bach, Cranach and Dumas dynasties had not been consolidated). And in his own mind - after all, hearing every day how his father's violin sounded, it would have been easy to succumb to the conviction of the senselessness of his own attempt to ascend as a violinist.

Did Igor receive help from his father? Undoubtedly. When he was young, it was in fits and starts, between endless tours around the world, when David listened to the boy and directed him to play. But that help was especially valuable, when for many years the son studied in his father's class at the Moscow Conservatory and its graduate school.

Was there any patronage on the part of the father? Of course. In 1947, David Oistrakh gave his son the opportunity to debut with him, performing a violin duet, and this duet lived on concert stages until 1974. It was that, mainly, that plunged Igor into the abyss of international touring activity. Igor was still a student at the time, but already the winner of several prestigious competitions.

It was a huge privilege to have the opportunities given to Igor by proximity to his father. What a treasure trove of life-giving sources for musical knowledge opened up in the early 1950s to a young violinist from the Soviet Union, locked behind the Iron Curtain! And later, in the 1960s-1970s, in creative communication with such giants as Otto Klemperer, Herbert von Karajan, Pablo Casals, Yehudi Menuhin, in meetings with Yasha Heifetz, Isaac Stern, Ruggiero Ricci! And what schooling they gave him - both as a violinist and as a future conductor - with performances under the direction of Herbert von Karajan, Georg Solti, Carlo Maria Giulini, Eugene Ormandy, Lorin Maazel, Zubin Meta, Seiji Ozawa, Gennady Rozhdestvensky, and Yevgeny Svetlanov!

But to use that privilege, not to break under the pressure - few would be able do that with the grace that Igor did. Few could turn the abundance of such strong impressions to the benefit of his own art. Igor spoke with his own authority, preserved his own creative face, and steadily confirmed the right to his own interpretations of the masterpieces of music. A father's name does not guarantee a successful career for his children, but Igor was successful indeed. As the English proverb says: "You can lead a horse to water but you can't make it drink." It is a pity that detractors of musical dynasties forget this truth. 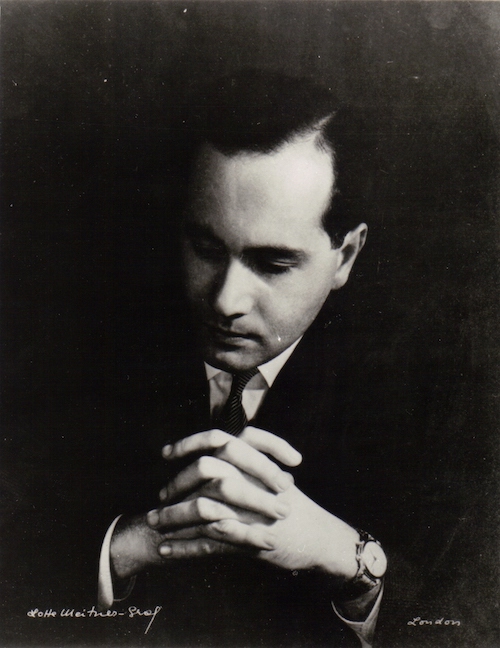 It was necessary to have phenomenal violin skills in order to perform together with David Oistrakh, to strive to play on the same level as he did. It was necessary to have a truly strong artistic personality in order to experience the influence of the powerful personality of his father every day, to overcome the feeling of a certain standard, with which many of his interpretations were perceived, to strive to play in a different way, in his own way.

In 1961, the famous French critic Bernard Gavoty exclaimed: "Igor is no longer his father's son!" Then the whole world began to call the violinists "King David and Prince Igor."

After Igor Oistrakh's performance in 1982 in London, an English critic wrote: "More than ever, he looks like his father; and more than ever, plays like him." With a smile, Igor himself commented on these words: "If in my younger years, when I deliberately tried not to be like my father, I was pleased with Gavoty's review, then after 20 years, the statement of his English colleague made me no less happy."

I was lucky to be friends and collaborate with Igor Oistrakh for many years - especially closely in the process of working on the book "David Oistrakh. Conversations with Igor Oistrakh" (1979), and on the book-album "Tsar David" (2017). These books simply would not have seen the light without the rare spiritual qualities, great erudition and amazing memory of Igor Davidovich. He spoke with kindness and responsiveness, unparalleled love and respect for the father; and he had the ability, when talking about people, not to remember any evil. But there is so much of it in this world!

Human memory is treacherously changeable and insidious, sometimes inclined to forget those artists, those musicians who do not flicker every day in public space. That is why it seems not superfluous to remind in these sad days of the creative "size" of Igor Oistrakh. Throughout his life, he certainly contributed to the consolidation of the "Oistrakh" brand in the world.

Today I received this remembrance of Igor Oistrakh, sent to me at my request, from Valentin Zhuk -- a wonderful musician - violinist, conductor, longtime concertmaster of the Moscow Philharmonic and Dutch radio orchestras.

A Word about My Friend, Igor Oistrakh

It is difficult to write in the past tense about Igor Oistrakh. By the way, we friends never called him Igor - for us he was Garik.

I will try to travel back almost 80 (!) years ago, when I studied in the 2nd grade of the Central Music School in Moscow. At one of the school concerts, an unfamiliar 11-year-old boy with a loud surname performed. I even remember that he played - "The War Concert" by Karol Lipinski (who remembers this piece now!). He then studied with Valeria Ivanovna Merenblum.

Unlike general education schools, classes in the Central Music School consisted of 10-12 people. The class in which Garik studied gave the country and the world such musicians as Mark Lubotsky and Gennady Rozhdestvensky. I want to digress from the topic and list the students who were a grade older: violinists Igor Bezrodny, Eduard Grach, Nina Beilina, Rafail Sobolevsky, Boris Shulgin, viola player, member of the Borodin Quartet Dmitry Shebalin, pianists Lazar Berman, Yevgeny Malinin, composers Alexandra Pakhmutova, Roman Ledenev.

Even against this starry background, Garik moved with giant strides to the heights of success.

It is worth remembering that he was highly regarded by none other than Yasha Heifetz. This is what Garik told me: “At the beginning of my big tour of the USA, I was told that Heifetz would be present at the last concert in Los Angeles. In the confusion of concerts and relocations, I somehow forgot about it. Before the concert in L.A. I was told that Heifetz was in the hall. Can you imagine my condition?!"

Our close creative and friendly ties arose when I became the head of the Moscow Philharmonic Soloists' Ensemble. Garik was always a welcome guest with us. Under his direction, we recorded eight Corelli Concertos (the first 4 were recorded with David Fedorovich Oistrakh before his death), all Bach's Brandenburg Concertos (in the Sixth Concerto the solo violas were performed by two violinists - Garik and myself). Many times we have played together the Double and Triple Concertos of Bach, Sinfonia Concertante for Violin, Viola and Orchestra of Mozart. I am especially proud to have participated as a conductor in his wonderful recording of Elgar's Violin Concerto. 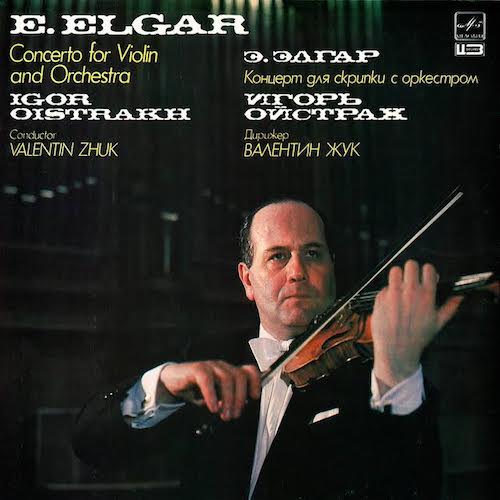 We met in Holland before his trip to Japan with the Dutch Philharmonic Orchestra. In the morning I took him home from Amsterdam, we spent the whole day together and the next morning I took him to rehearsal. This meeting was the last...

In my memory, Garik will forever remain a living and charming person, a great musician and close friend.