Studying the editions of Bach's Sonatas and Partitas (4): From the publication of Bach's manuscript onward

EDITOR'S NOTE: This is Part 4 in a multi-part series. Here are links to the other parts: Part 1: Manuscripts; and Part 2: Early prints and the Leipzig editions and Part 3: Into Modernism.

In 1950, the first facsimile of Bach’s entire manuscript of the Sonatas and Partitas was published, while in 1954 a new edition of Bach’s complete works, the Neue Bach-Ausgabe (in contrast to the ‘old’ Bach Gesamtausgabe by the Bach-Gesellschaft), was begun. In 1958 the Sonatas and Partitas were published, along with a Kritischer Bericht written by Günter Hausswald and Rudolf Gerber. Except for Bach’s manuscript eleven manuscripts by copyists are described. From that moment on there was no doubt anymore that only one manuscript by Bach was extant, namely the one that Joachim and Moser used for the first time for their edition.

In 1959 Hausswald and Bärenreiter (Kassel) published an edition for performers, of which the text followed the one of the NBA, but which was cheaper and more compact than a whole volume of the NBA. In the 1950s we see generally speaking more critical editions targetting the performer, in contrast to the critical editions of the nineteenth century. As James Grier remarks in his article on editing for 'The New Grove Dictionary of Music and Musicians':

"The initiatives of the 1950s refocussed attention on the preparation of scholarly critical editions that could also be used by performers. That approach stands in marked contrast to the attitude behind the first series of these editions, starting in the nineteenth century , which consisted largely of philological monuments and gave less attention to performance matters (although in many cases performing material was published in parallel). Musicologists responded to the challenges by considering the relationship between music of the past and the performer."

Bärenreiter’s edition from 1959 seems however to fall short of such an edition. There is a foreword of only one page which tells almost nothing about the edition itself and absolutely nothing about the consulted sources, which necessitates the performer to consult the Kritischer Bericht of the NBA after all. Perhaps this is the reason why in 2001 (Kassel) a new publication appeared with the same text as the one in the NBA and in the 1959 edition, but now with a more extensive foreword and a critical apparatus that deals with all twelve sources. Both editions do not add anything to the score which could be of specific use to the performer.
In the 1959 edition that is explained thus:

The 2001 edition explains the absence of additions by simply calling itself an Urtextausgabe (‘original-text-edition’).

Until now the above mentioned editions had a pedagogical function in the sense that they formed a technical basis serving as a preparation for the romantic repertoire. Even though the Sonatas and Partitas themselves were performed as well, the applied technique leaned toward the technique needed for performing the romantic repertoire. With the advent of the historical performance practice in the 1960s this changed. Fulfilling a pioneering function in this context was the edition by Heugel (Paris) in 1958 ‘publiées d’après le manuscrit autographe et annotées selon les conventions d’exécution de l’époque par Jean Champeil’ (‘published after the autograph manuscript and annotated according to the execution conventions of the time by Jean Champeil’).

In this edition the pedagogical aspect is also a central motivation but what is instructed now (via the medium of an edition) is an ‘authentic’ performance style. For that purpose a whole array of symbols had to be invented to ‘conduct’ the resulting sound (comparable to Capet’s edition) and which demands quite a bit of effort from the performer to become familiar with. The score contains metronome markings and newly invented symbols to indicate ‘notes inégales’, vibrated and non-vibrated notes and swells (by means of a fast bowstroke). An extensive foreword of about twenty pages deals with all possible information regarding the (presumed) authentic performance practice. Stuck on the front page of the edition I consulted a separate note mentioned a recording by Champeil himself as one (rightly) feared an edition alone would not suffice as an instructor. Needless to say, the performance practice that is advocated in this edition has become outdated (ironically enough).

The events of the 1950s concerning Bach’s Sonatas and Partitas seemed to give a new boost to the production of editions. Not only in Western Europe new editions appeared but also Eastern Europe (Krakau, Budapest, Graz), Moscow, Jerusalem and the US (New York, Los Angeles) participated in the publishing craze. Between 1961 and 1982 new editions appeared almost continuously (15 editions). 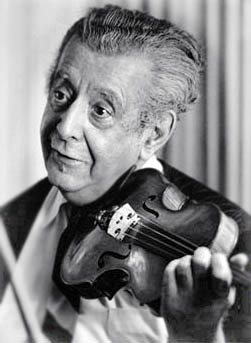 Ivan Galamian, a pupil of Capet and one of the most influential violin pedagogues of the twentieth century, published a practical edition in 1871 for International Music Company in New York. The text of his edition, based on Bach’s manuscript, contains additions in the form of fingerings and bowings. In the Editor’s Note different types of shifting and extensions are explained as well as how these are indicated in the score. In this sense it continues the tradition of using Bach’s Sonatas and Partitas in a pedagogical context.

Galamian’s edition also contains a facsimile of the entire manuscript by Bach but strangely enough its history got confused with the history of one of the copyists’ manuscripts – in spite of the information available in the Kritischer Bericht of the NBA. According to the foreword: "The manuscript of the six sonatas and partitas for solo violin, in fact, was discovered in 1814 in St. Petersburg among a stack of old paper destined to be used as wrappings in a butter shop. At least two other copies, not in the composer’s hand, were in existence, however, and one had appeared in print as early as 1802."

The story of the butter shop is, as we have seen, the story of Source C and not the manuscript by Bach.

Szeryng’s edition (B. Schott’s Söhne, Mainz, 1981) contains some twenty pages of ‘Performance Directions’ and ‘General Comments’ that contribute to an interpretation along the lines of a ‘romantic’ performance but which also borrows ideas from the historical performance practice. In a way you get the feeling of a search for a Holy Grail that is the key to letting the present performance practice and an ideal, authentic performance practice melt together. In the critical apparatus – in this edition called ‘Critical Remarks’ – we find information about the consulted sources (Bach’s manuscript and Sources B and C) and a list of differences between these sources (with references to the specific spot in the score).

The Urtext edition published by Henle (Munich, 1987) contains two versions of the Sonatas and Partitas in two separate booklets, both with their own foreword and appendix. Klaus Rönnau discusses the consulted sources concerning his own Urtext version and offers a list with differences between these sources. Wolfgang Schneiderhan’s discussion of his own version in the ‘Editor’s Notes’ basically states that for his version fingerings and bowings were added to the version by Rönnau and a newly invented symbol is used to notate the technical execution of polyphonic passages.

The idea to publish two versions in the same edition seems to lean toward the use of two staves. In the case of Henle’s edition however this cannot have been motivated by offering the user the opportunity to compare the text of the edition with the one of the original source(s) since the edition has been provided with a critical apparatus (which does that job already). Furthermore the version by Schneiderhan differs only very little from the ‘blank’ version which makes the blank version rather superfluous (if it’s purpose was still to provide the ‘original’ text). Consequently the blank version must have the purpose of enabling the user to create his/her own ‘edition’ based on his/her own interpretation. Probably the ‘ready-to-go’ edited version on the other hand rather serves students and amateurs and tries to meet pedagogical needs.

Strangely enough no other musical work besides Bach’s Sonatas and Partitas ever got published (as far as I am aware) with the music printed twice in the same edition, as is the case with the editions by Henle, David, Joachim and Moser, Flesch and Marteau (Steingräber, Leipzig, 1922). It seems as if it became a little tradition only reserved for the Sonatas and Partitas. Why? If this were a consequence of their pedagogical importance, we would expect this phenomenon with other works (violin methods, etudes etc.) as well, which is not the case. Perhaps it rather has to do with the fact that Bach delivered with his Sonatas and Partitas groundbreaking work in two fields: violinistically and compositionally. The two versions then are motivated by those two fields. The one version in an edition shows how a well-known virtuoso tackles the violinistic challenge, the other version brings honour to Bach’s compositional realization by presenting the text as authentically as possible.

The motivation for the recently published edition by Dagmar Glüxam (Wiener Urtext, Vienna, 2009) was to integrate for the first time information from a manucript by a fourth copyist (Source E) – i.e. mainly information regarding articulation – in an edition for performers. In the score these articulation markings are added within round brackets and in the critical apparatus this source is also included in the comparative list of consulted sources (besides Bach’s manuscript and Sources B and C). According to Glüxam this source is the most accurate source in comparison with Bach’s manuscript while the articulation markings have been added with great care. This doesn’t mean that they were approved for by Bach but in any case they enable the performer to get insight into the baroque performance practice which these works belong to. Not surprisingly Glüxam suggests a new hierarchy of sources that differs from opinions until then. The main source is of course Bach’s own manuscript (Source A), then follows the newly considered manuscript (Source E) and only thereafter come Sources B and C (on an equal level). The manuscript which Dörffel took into account for the edition for the Bach-Gesellschaft (Source D) is considered untrustworthy and irrelevant.

The foreword is typical of a critical edition. It contains a historical background of the works and Bach’s manuscript and explains what makes the current edition unique. In the ‘Notes on Interpretation’ Glüxam focusses on the musical-theoretical background of the Sonatas and Partitas instead of on the violinistic aspects. It deals primarily with rhetoric and the doctrine of affects, the character of baroque dances and baroque views on keys. To receive inspiration for the realization of the arpeggio-figurations the user can consult an included printed sample of Geminiani’s ‘Essempio XXI’ from 'The Art of Playing on the Violin', some twenty different broken chord patterns based on the same chord progression.

Here our journey ends – for now. From the perspective of authenticity Bach’s Sonatas and Partitas have perhaps been done injustice because of the pedagogical role they started to play. In retrospect however we don’t need to regret this as this pedagogical role, in turn, provided us insight into the historical performance practice of the nineteenth and twentieth centuries. And who knows, without this pedagogical importance a set of compositionally groundbreaking works for the violin would have fallen into oblivion.