Studying the editions of Bach's Sonatas and Partitas (3): Into modernism

EDITOR'S NOTE: This is Part 3 in a multi-part series. Here are links to the other parts: Part 1: Manuscripts; and Part 2: Early prints and the Leipzig editions and Part 4: From the publication of Bach's manuscript onward
.

From the 1880s onward the amount of newly published editions of Bach’s Sonatas and Partitas increased considerably which fits within the general music historical picture of the second half of the nineteenth century, i.e. an increase of music publications due to an expanded middle class. Initially these editions remained practical editions such as the editions by Friedrich Hermann (Breitkopf & Härtel, Leipzig, 1896) and Eduard Herrmann (Schirmer, New York, 1900). The title page of the aforementioned edition again betrays the pedagogical role of Bach’s Sonatas and Partitas:

Hermann considered David’s edition as well as the violin part in Schumann’s transcription to be based on Bach’s own manuscript. It even seems as if he may have published or planned to publish a piano accompaniment since he considered the one by Schumann not stylistically appropriate to the violin part. He also provides an explanation for the need of a piano accompaniment: An accompaniment is needed for performance in public but not if one used the works for educational purposes: Joseph Joachim (1831-1907), a pupil of among others Ferdinand David, published in collaboration with one of his own students, Andreas Moser (1859-1925), the first edition based on Bach’s own manuscript (Bote und Bock, Berlin, 1908). Not only did Joachim liberate the Sonatas and Partitas from their almost purely pedagogical reputation by performing them regularly – without accompaniment – in public, in 1903 he also recorded the Adagio of the first sonata and the Tempo di Borea of the first partita as the first violinist to be ever recorded.

According to the foreword the edition is based on a photographical reproduction of a manuscript by Bach, which enabled the editors to accomplish ‘eine von allen anderen Ausgaben unabhängige, durchaus selbstständige Arbeit’ (‘a from all other editions unattached, throughout independent piece of work’). The manuscript itself, that was ‘bisher so gut wie unbekannt’ (‘until now as good as unknown’), was at the time owned by the widow of the Thomaskantor Prof. Dr. Wilhelm Rust of Leipzig and was kept safe by Herr Dr. Erich Prieger in Bonn. The fact that the editors speak of ‘a’ manuscript (and not ‘the’ manuscript) is due to the fact that one still didn’t know that the other two known manuscripts were not by Bach himself.

The foreword also mentions how pupils and colleagues urged Joachim for years to publish an edition that was based on the authentic text while simultanuously reflecting Joachim’s own interpretation. This resulted in an edition with two staves like the one by David. The edition by Joachim and Moser turned out to be unique however because it enables the user to compare the edited text with the original in three different ways. First of all they attempted to publish a facsimile of the manuscript to include in the edition. After long negotiations the editors were eventually allowed to publish a facsimile of the Adagio from the first sonata. The adoption of David’s system with two staves might have been motivated by the failure to publish the entire facsimile. This way the user is still able to verify the original text to a certain degree of accuracy. A third way was the relatively extensive (in comparison with previous editions) discussion of the editorial changes in the foreword. It comprises a short list of adaptations of rhythm and pitch in the upper (edited) staff with referrence to the specific bar. Thus the germ of a critical apparatus is already present.

Pedagogical information is also included in the foreword, more specifically stylistic advice regarding tempo, the Ciaccona as a dance, the invention of arpeggio-figurations where these are not written out in the score and the manner of practicing melodies accompanied by chords. For general technical advice regarding bowings, fingerings, double stopping and chords the reader is suggested to consult the 'Violinschule' by Joachim and Moser.

The year 1908 is also the year of the first French edition, published by the French violin pedagogue Édouard Nadaud (1862-1928) and the Belgian violinist Hubert Léonard (Costallat, Paris). In spite of – or maybe we should say ‘thanks to’ – the fact that the French maintained a well organized violin school since the foundation of the Paris conservatoire in 1795, this edition came relatively late. 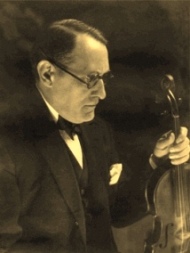 Shortly thereafter the French quartet leader and violin pedagogue Lucien Capet (1873-1928), the teacher of Galamian, who published an edition of Bach’s Sonatas and Partitas as well, published an edition for Sénart (Paris, 1915). There is no mention of the consulted sources but it is highly unlikely that Bach’s manuscript was among them. Instead the text resembles much the one by David. Strangely enough though, the Adagio contains all the same divergences from Bach’s manuscript as David’s edition except for the first bar, which states Bach’s version.

Capet’s practical edition again fits perfectly in the pedagogical frame. The left inside coverpage bears the title ‘Enseignement général’ (‘General education’) and contains a survey of publications about solfège, dictation, sight reading etc. The right inside coverpage with the title ‘Enseignement du violon’ (‘Violin education’) mentions among others the method 'La technique supérieure de l’archet' (‘Superior bowing technique’) by Capet himself and lists a series of classical works that were revised by Capet in such manner that they follow his method. These works are the etudes by Fiorillo, Gaviniès, Kreutzer, Mazas and Rode, and Bach’s Sonatas and Partitas.

The first page explains the used symbols in the edition that were invented by Capet and adopted from 'La technique supérieure de l’archet'. These markings control details such as the type of vibrato, the kind of shift and the types of bowstrokes one should apply. The resulting sound couldn’t be more exuberantly romantic.

That is to say: After the period between 1920 and 1925, in which no less than seven editions appeared, an equally exuberant practical edition appeared: the one by Carl Flesch (1873-1944), published in 1930 for Peters in Leipzig. This edition is based on Bach’s manuscript, which Flesch states in the foreword in the following manner:

Possibly Flesch mentions this because previous editions were not all based on this manuscript. Capet’s edition is an example but also Eduard Herrmann’s republished edition of 1929 doesn’t indicate any awareness of the real manuscript by Bach. In his foreword Herrmann states:

it was my endeavor to keep strictly in accord with the original […] it [Herrmann’s edition] is in exact correspondence with the manuscript on which the edition of the “Bach-Gesellschaft” is based.

In Flesch’s edition the regard for authenticity manifests itself on the one hand by the use of a second staff, on the other hand by means of a short discussion about the changes and additions by the editor, among them the addition of fingerings, bowings and caesurae and the omission of rests in tacit voices in polyphonic passages. As with Joachim and Moser’s edition the user is told to consult the editor’s own violin method for more extensive advice. In 'Die Kunst des Violinspiels' one can find more information about the interpretation of Bach and an analysis of the Ciaccona.

The editions of Capet and Flesch fit within a changing performance context at the beginning of the twentieth century. Moser felt this change with some aversion. According to him the so-called Franco-Belgian violin school suffered from a few shortcomings due to two factors. On the one hand the attempt to imitate Paganini – instead of having an education based on the classical violin repertoire (Leclair, Rode, Spohr…) – caused French violinists to lose their singing tone and to develop a stiff right arm technique. On the other hand the influence of the French grand opéra, in particular the operas by Meyerbeer, caused a performance style full of theatrical exaggerations which in turn lead into compositions such as the violin concertos by Vieuxtemps.