Recently a violinist came to my violinmaking workshop and pleased me to reglue an open seam on his violin... While I proceed in heating the glue and preparing the seam, this chatty nice man told me a very instructive anecdote, that might be of any interest to you: 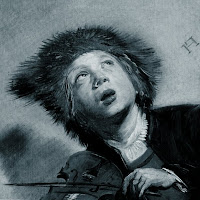 When he was a boy, already beeing a violinstudent, he was interested in music and playing the violin more than in anything else. He loved his instrument very much, so he decided to save money to “new good pegs from ebony!”

After a while, when he had saved enough money, he went on to the violinmaker “Meister Schmutzer”, who was well known in town. The boy ordered: "New, ebony-made pegs for my violin, please!" Master Schmutzer confirmed and told the boy date and time when to pick up the violin again.
A few days later, the young violinist joyfully returned to pick up the violin, paid the whole sum and took his violin back in its own right. Gladly he went home and took out the violin of its case to examine the new pegs.
Actually, when he had fixed the pegs to the right tuning for playing the violin, he noticed that his fingers were tainted all over with black colour --

Just as he became fully aware of the fact that he had been cheated he realized: "All that is colored black is not ebony!"

Proceeding in repairing the violin I listened to the story thinking by myself “What ugly kind of man would be able to cheat a young boy in that way?”

Nevertheless my chatty customer has learned from his experiences in the past: Hasn’t he ordered immediately repair ?!”
The whole time when I was working on his violin his eyes were fixed on my acting and finally he considered to grabbe the violin with attached clamps on, promesing that he would return the clamps another day!

Finally he left half an hour later-- with his violin-- but without clamps, hoping the glue would be stable enough so that the seam doesn't open again soon.

I do hope too that the glue does its job well, so that this man will be able to win more trust in violinmakers skills and their intentions! --

And I do hope, that you like reading this story!

Interesting story, thanks for sharing!

So true.  And some  makers without necessarely fooling you, kind of consider amateurs and students as you know what and this is almost as bad.  Find a maker that you respect and that will respect you regardless of your "statue".   I love my maker and hope everyone could find one like this!

"Meister Schmutzer" as a name for a person who puts schmutz on the pegs to make them look like ebony--that's funny!

Nomen est Omen!
"Schmutz" is the german word for dirt! -- But Mr. Schmutzer is also a real person: He was a violinmaker from Vienna, I think,  got a workshop in Bad Ischl (UpperAustria) and emigrated to the USA before 1938.

Some things are connecting for me.

Years ago when I was a teen and my other siblings were much younger, my mother came home with a puppy. He was a Heinz 57messy little yellowish pup who ran around, chewed everything and generally added to the chaos of our 9 member family. My father dubbed him "Schmutzie."  We never knew the origin of this name. Could my German, former violinist dad have known about this man? We just thought it "sounded" cute--and Dad seemed so delighted that this little beast enthusiastically responder to his new name that we never questioned it.

( He told us that it meant "Dusty" in German)