my Dorian CDs are back in print! 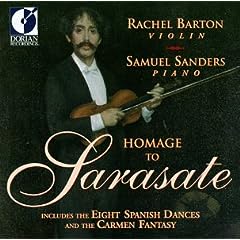 My two albums for Dorian Recordings are finally back in print. My very first CD, “Homage to Sarasate,” was recorded in 1994 when I was 19. A collaboration with the legendary pianist Samuel Sanders (now sadly passed away), it includes Sarasate’s complete Spanish Dances and Carmen Fantasy. “Ferenc Liszt: Works for Violin, Volume 1,” recorded in 1997, features 8 original violin pieces by Liszt. They are fascinating and beautiful, representing both Liszt’s earlier virtuosic style and his later quasi-impressionistic chamber music period.

The last two months have been pretty non-stop but very fun! I am looking forward to sharing stories and photos with you from my trips to Oregon, Ghana, Germany, Santa Fe, New York, and Singapore.

For today, I’ll just leave you with a couple cool tidbits.

Last month, I had the great honor of spending an evening with Uli Jon Roth (of the Scorpions). At one point, he asked me to play his favorite part of the Brahms Violin Concerto – the end of the exposition of the first movement. When I got to the intense sixteenth-note passage, he pointed out that, years ago, he had started incorporating that lick into some of his guitar solos, and then “Eddie” (meaning Van Halen, of course) had started copying him, and then all of the other guitarists started copying Eddie. I was blown away to learn that this lick which every guitarist plays these days originated from Brahms via Uli!

Last week, I got to hang out with the guys from Alice Cooper’s band at a Steve Vai concert. The lead guitarist, Keri Kelli, spontaneously shared with me that his favorite music is pre-Paganini Italian violin repertoire. Can you believe it? This guy has performed in Skid Row, Ratt, L.A. Guns, and Slash’s Snakepit, but he listens to Locatelli and Tartini!

By a perfect coincidence, my newest album, “An Italian Sojourn,” includes sonatas by Locatelli, Tartini, and more.

my newest album – “An Italian Sojourn” with Trio Settecento

What a difference a decade makes! In 1996, John Mark Rozendaal, David Schrader, and I collaborated on a recording of Handel’s Violin Sonatas. We enjoyed working together so much that in 1997, we formed Trio Settecento. This album, An Italian Sojourn, represents the culmination of ten years’ growth for us as individuals and as an ensemble.

In 1996, I recorded Handel using a modernized 1617 Amati and a baroque bow. My interpretations on that album combined a historically-informed approach to phrasing and ornamentation with a contemporary application of vibrato. This continues to be my approach when performing a Baroque sonata alongside Romantic and 20th/21st Century works on my 1742 Guarneri del Gesu.

However, my exploration of the sound world of the 17th and 18th Centuries has evolved significantly. In 2002, I began performing this music on a 1770 Nicola Gagliano in original condition. This beautiful instrument has had a remarkable effect on my capability to be faithful to the early composers’ intents and to bring their music most fully to life.

I am so grateful for the opportunity to collaborate with John Mark and David. Their passion for music, boundless thirst for knowledge, and mastery of their instruments makes our time together an exciting musical adventure and increasingly rewarding. The longer we play together, the more we breathe as one, anticipate each others’ nuances, and discover increased freedom and spontaneity in our improvisations. And through all these years of intense rehearsing, we remain the best of friends!

Baroque music holds the power to delight and astonish. We chose the pieces on this album for their profound beauty and sometimes startling originality, even eccentricity. I hope that you are as excited to discover this music as we always are to play it.

Not surprisingly this new release from Rachel Barton Pine, this time with her friends and Cedille label-mates John Mark Rozendaal and David Schrader--appearing together as Trio Settecento--offers a well-thought-out program. As demonstrated on her previous recordings, Pine is interested not just in filling a CD with good music but in providing listeners with a broader, more meaningful experience. In this case the trio's aim is to show the ways different Italian or Italian-influenced composers realized the possibilities of the newly emerging voice of the solo violin beginning in the late 17th century. And "voice" is the key word here, as throughout these eight very distinctive pieces we hear all manner of expressive effects as well as the pure, artful exploitation of the violin's capacity for lyrical, singing melody.

Both of these features are amply--and memorably--displayed in the first movement of Locatelli's Sonata da camera Op. 6 No. 2 in F major, where the elegant, flowing course of the melody is frequently enlivened with little quick flourishes and runs, where bow and fingers literally skim across the strings. These connective devices are not mere ornaments but importantly allow the performer to give character to the instrument, which in the hands of a first-rate soloist--as we have here--can almost sound like it's speaking. Another highlight is Tartini's Sonata Pastorale in A major, whose opening movement is rich with pleasing melodies and well-integrated instrumental textures, its second movement a spirited Allegro--but its final movement a tour de force that recalls shepherds' bagpipes interspersed with sudden outbursts of raucous dancing.

There's so much more here to enjoy, including the more stylistically formalized Corelli and Handel sonatas--and the dazzling final Ciaccona of Veracini's Sonata in D minor Op. 2 No. 12 that closes the disc. But as well crafted as these sonatas are, it's Pine and her outstanding colleagues that make the impression, and it's obvious that these players--all respected soloists--have been together in this repertoire for a long time. In fact, they've been performing as an ensemble for more than 10 years, successfully applying their exceptionally high level of modern technique and artistry to a sincere concern for period-performance authenticity. I especially enjoyed the sound of Pine's original, unaltered 1770 Gagliano violin, which in her hands sings with an impressively assertive tone--bold and gritty, with a lovely, silvery upper register. This is a disc that demands, encourages, and truly rewards many hearings, made even more enjoyable by the vibrant, natural, ideally balanced sound. Highly recommended!

Cedille Records has released An Italian Sojourn, the first in a planned series of baroque-music CDs with Chicago-based period-instrument ensemble Trio Settecento.

Future discs by the trio of violinist Rachel Barton Pine, ‘cellist John Mark Rozendaal, and harpsichordist David Schrader will focus on music from Germany, France, and the British Isles, the label announced.

An Italian Sojourn traces the remarkable musical innovations of Baroque-era composers in Venice, Rome, and beyond. [www.rachelbartonpine.com/mus/mus_13_release.htm | Read the rest of the press release.]

Historians in the fields of the sciences, social and political studies, psychology, philosophy, religion, literature, and the arts all note an important shift in some core aspect of social and human consciousness — indeed in the basic ways of human beings — in Europe dating from about 1600. From this moment, Westerners began to adopt a new, more complex attitude towards the “self,” fundamentally redefining personhood. In the field of music, the new paradigm was signaled by the development of an entirely new voice. This new voice of the seventeenth century included a new technique of vocal production; an analogous new “voice” for instruments (the voice having long been regarded as a type of instrument, and instruments as stand-ins for voices); a powerful new persona for the individual performer; and a cultural phenomenon encompassing a new concept of “audience,” including new institutions through which audiences and performers could meet one another. The birthplace of the new voice was, of course, in the land of music, Italy; the conception occurred quietly in Florence and then vociferously in Venice. While the first embodiment of the new voice was the opera singer, the violinist was a not-too-distant second. In Trio Settecento’s “Italian Sojourn” program we follow the voice of the Cremona violin to hear what that voice could say: what tales of mystery, joy, or tragedy it could tell in Venice and Rome, and even as an expat in Dresden or Amsterdam.

Trio Settecento formed in 1996 to record the complete violin sonatas of George Frideric Handel. The critical acclaim for that disc led to period-instrument recitals throughout the U.S., including their New York debut at the Frick Collection in 2006 and their debut at the Boston Early Music Festival in 2007.

“Some of the most refreshing, life-enhancing Baroque playing heard in years.” -Chicago Tribune

watch a video of Trio Settecento

REVIEW: my concert in Santa Fe

Violinist Rachel Barton Pine, one of the outstanding players of her generation, is happily no stranger to New Mexico, but as she announced from the stage, this was her first appearance in Santa Fe. Barton plays with a gorgeous lyricism reminiscent of the great Zino Francescatti of a previous era. The warmth of her tone is mirrored by an infectious smile.

The first movement of the Bruch Violin Concerto No. 1 was strong and without a trace of the schmaltz that can often destroy its character. Smith brought to the work a potent accompaniment perfectly balancing the soloist.

But Pine was not finished with the concerto. Remaining on stage she continued with the virtuoso showpiece, Zigeunerweisen (Gypsy Aires) by Sarasate, which uses authentic folk melodies. Dazzling ornaments appeared at every turn in the slow movement, followed by pinpoint intonation in the highest registers at breakneck speed in the feverish conclusion.

Still she continued with a solo encore of tunes about Chicago, her hometown, culminating in a wild and crazy rendition of "Sweet Home, Chicago" by the Blues Brothers.

REVIEW: my concert in Singapore

Ones To Watch is a new series organized by the National University of Singapore’s Centre for the Arts featuring inspiring young artists who have excelled in their respective fields.

The series was inaugurated by American violinist Rachel Barton Pine, whose sparkling stage personality is equaled by rare artistry.

Like Itzhak Perlman, she played seated on a high stool and communicated with a sincerity, directness and good humour that reminded one of the elder statesman of the violin.

Her 1742 Guarneri del Gesu sang with a full-blooded tone that resonated deeply in the packed Conservatory Concert Hall, noted for its reverberant acoustics.

This served the unaccompanied Bach Sonata No. 1 in G Minor to a tee, which Pine delivered by playing with purity and refinement yet also with vibrancy.

The polyphony of Bach’s writing in the Fugue and final Presto was also gratefully reciprocated with her crystal clear articulation and flawless intonation.

This gorgeous sound continued into Brahms’ Sonata No. 1 in G Major, where locally based Lanny Yap’s substantial piano part – sympathetically played – was never allowed to be submerged by Pine’s force of personality.

The shorter pieces that filled the concert’s latter part gave a sense of balance to the programme. Two American female composers began the proceedings: Augusta Read Thomas’ unaccompanied Rush was a short, dissonant shock to the system, soothed by Amy Beach’s lyrical Romance.

The Negro spiritual was central to Deep River and Deliver My Soul by Samuel Coleridge-Taylor and David Baker respectively, both African-(descended) composers.

Pine played these with great feeling and nuance, and the penchant for melody was completed with Pablo de Sarasate’s flashy Carmen Fantasy which drew premature applause midway through the work. Her enthusiasm had obviously rubbed on to the audience.

Her encores were unabashedly American, a jazzy medley of tunes inspired by her hometown of Chicago and Henri Vieuxtemps’ tongue-in-cheek Yankee Doodle (variations).

Another feather in the cap of a brilliant young musician who is certainly going places.

I am very excited to be traveling to Israel for the first time! Here is my concert schedule: