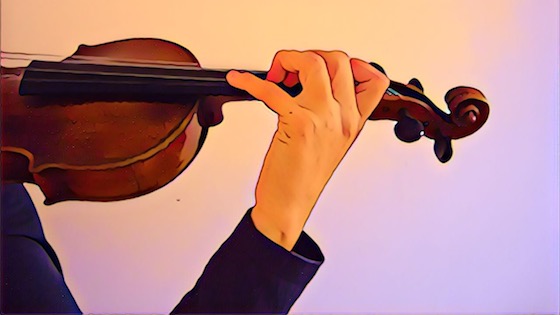 GOVERNING PRINCIPLES for Making Your Own Choices:

Each string has a different timbre. Any note on the E string can be played on any other string. Consider what sound you desire. What is indicated by the composer? What is expected? If you cannot play the beginning of Monti's Csardas all on the G string, perhaps you are not ready to play the work. Are you doing the expected string crossings in Bach? They are written in a particular key to achieve the desired effect such as bariolage.

When should you cross strings? When shifting is impractical in fast passages, crossing strings is preferred. Avoid crossing strings for just one note. Perhaps you want to keep a sequence or a phrase on the same string to maintain the same sound. High melodic passages where tone is paramount will be best played on the E string. Avoid crossing over to lower strings in high positions, as the tone is less clear.

Should you play open strings or stopped notes? Avoid open strings on strong beats and/or long notes in a melodic passage. Playing the open E string, with its metallic timbre, is considered a sin in many orchestral passages. One example is the opening of Strauss' Don Juan. Sometimes an open E is appropriate, but it causes a whistling sound, making a stopped note the preferred fingering choice. Other times the open string is essential. The non-whistling E string provides a good solution. Public school teachers do a great job of introducing the 4th finger early. However, I have had students who struggle to play an open string when marked, since the habit of using a stopped finger has become so engrained.

Are harmonics cheating, or in good musical taste? Why do we see them so frequently used by editors? A harmonic can be achieved by extending the 4th finger upward from third position, resulting in an octave above the open string. I avoid harmonics in the Baroque and Classical periods. Solid fingers are preferred in melodic passages, as they will match in timbre and can be vibrated. Of course, there are exceptions to every rule.

Should you shift or add a portamento slide? What is the style of the music? Shifting is for transportation. Portamento slides add personal expression. The two types of portamento slides are often associated with the famous violinists who are known for them. Fritz Kreisler preferred the French slide which began with old finger and Jascha Heifetz was associated with the Russian slide, an under-slide originating with the arrival finger. If you want to hide an audible shift, a half-step shift is a great way to gain a position. Shifts after open strings are also inaudible. Extensions work well in passages with ascending triads. They can be fingered 1, 3, 4 or 1, 2, 4, depending on your hand frame.

In his Treatise on the Fundamental Principles of Violin Playing, Leopold Mozart points out the following principles regarding shifting:

Don't be afraid to experiment. Start with what is in the part, but challenge what doesn't make sense or work for you. Practice a passage starting on each of your four fingers. Boris Schwarz states in his Editor's Preface for Flesch's book, Violin Fingering: Its Theory and Practice, that Flesch was not dogmatic about the fingerings his students used. He freely shared his marked parts, but students were free to experiment, as long as their choices were logical. (Flesch, 1966) Flesch also states that ". . . the average student usually regards the fingerings, printed or inscribed in his music, as gospel-truth, which he follows in blind faith. This lavish dependence will have the effect of gradually stunting any innate predisposition for original thought, while at the same time the development of personal taste is impaired." (Flesch 1966)

August 28, 2019 at 03:42 AM · Very often I see harmonics written into an edition. But when you hear a top soloist, they don't play harmonics there. I think that's because a harmonic is a missed opportunity.

I love figuring out my own fingerings (and challenging what is provided to me) - and having conversations with my teacher about ones that do not seem to work for me and my alternative. Sometimes they change to the suggested fingerings, other times, not.

Ha, good one Paul! My teacher is pretty adamant against using harmonics as a way to cheat/be lazy - they'd rather the proper work be done for the music.

August 29, 2019 at 03:57 AM · I too use harmonics in difficult and / or fast passages...They help a lot with intonation and provide relief in the middle of an otherwise exhausting piece. I’m learning the Dvorak right now and thank God for harmonics:-)

August 29, 2019 at 09:41 AM · There is no such thing as incorrect fingerings only more suitable fingerings than others and this is influenced by a player's strengths and weaknesses as well as personal preference.

In the past I have revisited pieces I played years ago and now I am a much more competent violinist I often found myself using different fingerings as well as bowings.

Due to my small hands I have to adjust the fingerings I use accordingly. For instance where an octave might be achieved using 1st and 3rd fingers I will use 1st and 4th fingers instead. Sometimes I long to have big hands like Perlman! 10ths are essentially impossible for em and I don't know if a teacher, I haven't had one for 3 years, could help me rectify issues like this.

I like seeing fingerings in pieces as it gives another opinion on what fingers should be used although I don't always agree with them/find alternative fingerings easier. On the very odd occasion I come across fingers which simply make no sense at all to me and I completely ignore them as I can't see how anyone could play the piece with the suggested fingerings.

August 29, 2019 at 07:00 PM · There is another category of fingerings. They are sometimes called advanced fingerings or prepared fingers. But many of these fingerings are never sounded. They may be placed to help prepare another finger to be more accurately placed.

Advanced fingerings are frequently also held down fingers through up to several measures.

August 29, 2019 at 08:15 PM · If you listen and peer back at some of Heifetz's fingerings, you'll be scratching your head: Why would he make this choice ??....but then, this is why Heifetz was such a singular, expressive and exquisite player. And in contrast to his main competition, that being Nathan Milstein, who's playing was musical for sure but so pristine regarding shift noise etc. Others from the period added glissandi and unmusical slides perhaps designed to create a personal musical fingerprint.....but by today's standards, they are crude and melodramatic.....And Heifetz' quick tempi added to the distinctive quality of his playing...none have come forth to match his imaginative interpretation and style.

I like when sheet music has suggestions for fingerings especially in difficult or ackward passages, it can help a lot on playing the piece. Then after a while I might find something that works better for me but that is OK. I got going when I started playing the music.

I compose music myself. Once I composed a piece for viola and piano and wrote some fingerings and performed the piece together with a pianist. Then later on I picked up the piece again and didn't like some of the fingerings. So I made some new ones and performed it again. Now I am prepairing to publish the sheet music and then comes the question: Should I include fingerings, if yes then which ones? There are some passages that are really difficult and it is hard to find good fingerings for those sections.

My answer to my own question is that I will include fingerings for those passages because it does give a good idea on how you can play them, but I do know that other viola players might want to play them differently, since I even might want to play them differently myself. But as I said in the start, it is my experience that fingerings in difficult passages do help first time you see the music.

I almost completely disregard other people's fingerings because I have the shortest fingers of any adult I've ever met (including people a foot shorter than me) and I mainly play viola. When my stand partner and I both pencil fingerings into an orchestra part, it's always quite remarkable how different they are.

I admit to using harmonics rather frequently -- but not to cheat on intonation. It's more because my very short 4th finger can't always stop the note quickly enough in fast passages, at least not without risking injury.