With inspiration from Rosalind’s comment on my recent blog, I’ve decided to do a review on albums purchased by me in the year 2008.

I will try to categorize the albums best I can.

The Bach Album by Janine Jansen is a wonderful collection and a very unique group of pieces. Included is the first movement from the Sonata in G minor, Adagio; the D minor Partita; Bach two-part inventions and three-part inventions. Jansen was very creative when selecting repertoire for this album. She did something never before done by recording the two and three-part inventions arranged for string instruments; teaming with Maxim Rysanov (Viola) and Torlief Thedeen (Cello). This album truly brought a fresh approach to chamber music. Her D minor Partita is among the best. Especially the thrilling thirteen minute Chaconne. Her interpretation is very pure. If purchased through iTunes, a music video of Jansen and Rysanov playing two of the inventions is included. This album is something that should be looked into if someone wants a fresh view of Bach classics.
Bach: Sonatas and Partitas- Nathan Milstein. Milstein’s way of playing was very much comparable to others  in the late 50’s to early 60’s; almost rough or “choppy” in a sense. But is still his interpretation and deserves to be heard. Milstein recorded the entire set of Sonatas and Partitas. This album is an interesting piece to buy whether to be just enjoyed, studied or compared to modern interpretations. 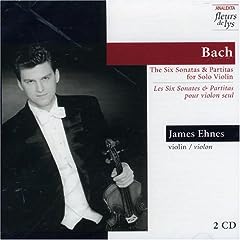 Bach: The Six Sonatas & Partitas- James Ehnes. I cannot tell you much about this album as I only have the G minor sonata. But I can tell you that Ehnes has a pure interpretation and it is very nice and worth looking into by anyone.
Bach: Violin Concertos by Hilary Hahn is an up-beat album and I think that Hahn has done Bach proud. She certainly did not make the composer turn in his grave like some artists have done. Hahn has a very proud and almost dignified way of performing the Bach Concertos. I think this album was performed very much like it would be in the days of Bach himself. This album is a great addition to anyone’s collection and with Hahn’s pure interpretation you can be sure you’re hearing the pieces the way they’re supposed to be played.

Hilary Hahn Plays Bach- What a great set of performances. Hahn did not record the complete set but her way of playing Bach is still a force to be reckoned with. Hahn has a very unique interpretation unlike others I have heard. I have to say the heart of the D minor Partita is not the Chaconne, but Sarabande ; the piece is beautifully performed and makes the heart cry. The Partita no.3 in E Major and Sonata no.3 in C Major are incredibly up-beat and Hahn has a very special way of performing a piece at a fast tempo and keeping it extremely clean at the same time.  A great recommendation to anyone looking for a pure interpretation of solo Bach the way it should be played.

Elgar: Violin Concerto- Hilary Hahn. The concerto was tastefully paired with The Lark Ascending; Hahn’s interpretation of the Romance for violin and orchestra uniquely her own. Once again, the recording of the concerto is extremely pure and an amazing way to be introduced to the works of Edward Elgar.

The Essential Midori- Need I say more than the title? This album compiles recordings by the artist ranging from the years 1988-2005. The album consists of five Paganini Caprices; among the purest. A movement of solo Bach;  Praeludium and Allegro; Salut D’amour; Tzigane by Ravel. As well as movements of multiple concerti; like Tchaikovsky, Bruch, Mendelssohn, Sibelius and others. Many sonatas for violin and piano as well as a romance for violin and orchestra are included. This album is a combination of many of Midori’s works and they are all very nice. It’s very much a good album and a way to find exposure to many pieces.
Introducing Shannon Lee is exactly what was done when the debut album of this young artist was released by Telarc. The album consists of a variety of pieces by Wieniawski, Ernst, Kreisler and many more. I have to say her Chaconne (Vitali) is among the best and purest.  I see a rise to the stars in this teenage girl’s future.

*For some reason the video of Shannon Lee will not embed, so here is the link to it: http://www.youtube.com/watch?v=JqkAtmY41mM -- Sorry for the inconvenience

Janine Jansen is the self-titled album of the Dutch violinist. I have to say that this album is one of the best and most exciting I have purchased. Her interpretation of Schindler’s List will bring tears to the eyes while Swan Lake, Op.20: Danse Russe will make the heart skip a beat. The album contains works like the above listed as well as Introduction et Rondo Capriccioso, Tzigane, The Lark Ascending and others. This album truly is beautiful and a must-have for anyone looking for exposure to non-concerto repertoire for the violin accompanied by orchestra. 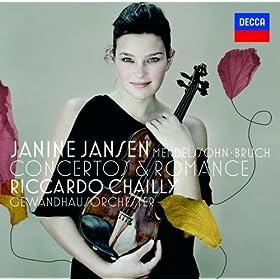 The Mendelssohn & Bruch concertos were recorded by Janine Jansen in 2007. The Mendelssohn is astounding and it’s amazing as Jansen tangos with the orchestra throughout the entire piece. The Bruch concerto is rich and pure in interpretation. Included in the album are two lesser-performed, almost rare pieces. Max Bruch’s Romance in F Major for viola and orchestra is a beautiful piece and Jansen has a very special way of playing the viola. A chamber version of Felix Mendelssohn’s mini-concerto in D minor is the finale to the album. This album is something that deserves to be recognized and I encourage you to listen to it.

The Grammy Nominated Schoenberg & Sibelius album released by Hilary Hahn is a magnificent addition to the recording world. Hahn’s performance of the Sibelius is among the best and her interpretations seem to flow naturally and they are not over-influenced by emotion. Hahn has been very wise in selecting her repertoire and she definitely is performing some of the less known concerti.
Vivaldi: The Four Seasons were introduced like never before in 2005 with Janine Jansen’s recording. The recording took place in Amsterdam, the place where concertos were first introduced almost 300 years ago. Jansen eliminated the usual heavy orchestral sound by using only one player per part- Pure genius. Her recording is magical and I highly recommend this album to any Four Seasons lover who is looking for a fresh view of this classic.

With that I will close my review. I am sorry that it’s not the best, but it’s my first time so if I ever do it again hopefully it’ll be much better.
P.S. Laurie- sorry I’ve been flooding the blog section these past few weeks!

The Hahn Bach that you listed!

A Slight Deviation from the listed Genre: Anything by RUSH!

Happy Christmas Paul. Hope you stick around long enouhg to entertian me in my fading years.

Paul, don't judge by comments; very often when you write something very thorough, people don't comment much, but they do read!