My recital at Steinway Hall, on Oct. 28

Hi everyone, I played a recital this past Monday evening, at Steinway Hall, in the beautiful headquarters of Steinway & Sons in New York City. It was nice meeting some new people in the audience (which included some violinist.com members), and seeing some old friends as well.

I found out this was one of the very last concerts in the historic building before Steinway moves its headquarters to a different location. The 88-year-old building down the block and across the street from Carnegie Hall, has been sold . It will, from my understanding, be turned into an apartment building.

I highly recommend visiting the Steinway building on 57th Street while you can (which won't be for much longer), if you are in New York.

When going inside the historic building, rather than feeling like you're in a showroom, it feels more like a museum, with the wonderful art-deco architecture (kind of like Grand Central Terminal), the numerous pianos, statues, historic photos of great artists, and paintings that line the walls. I couldn't help but be inspired while playing this recital. 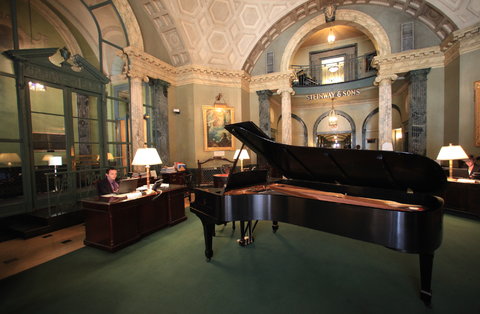 Here is my video of the Saint-Saëns Introduction and Rondo Capriccioso, a piece that I have been working on since I was 10, and seem to never get tired of. It has been one of my favorite showpieces to play. I hope you like it!