Talking to John Beder about Beta-Blockers and his documentary, 'Composed'

Talking about beta-blockers is a loaded subject- some people use them openly, others secretly, and some people abhor them. Everyone has an opinion it seems, yet no one seems to want to talk about them publicly. John Beder, a classically trained percussionist, is beginning a documentary project on the use of beta-blockers in classical music, focusing on auditions. I think this is a fascinating project, not only reflecting how classical music may have changed in the last 50 years, but also how performers view perfection and the attempt to achieve audition perfection. I asked him a few questions in the midst of his kickstarter launch to fund the documentary, "Composed." 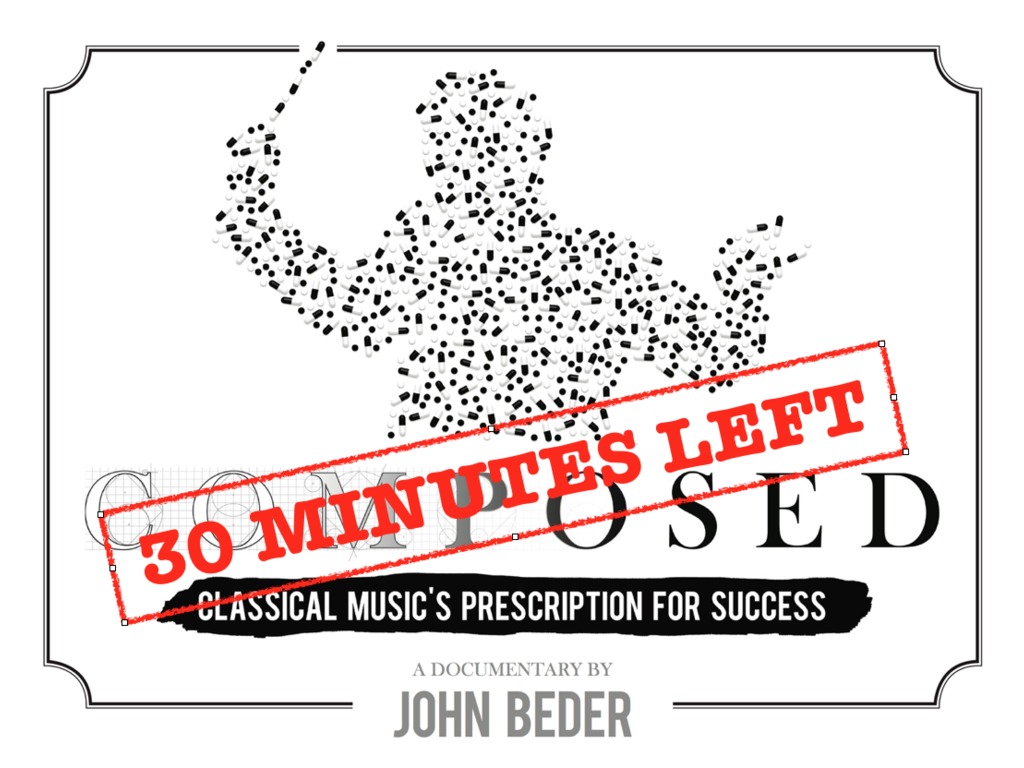 Kayleigh: What's your background in classical music and where did you grow up/study/etc?

John Beder: My formal introduction to music started at the Boston Arts Academy where I’d transferred for my sophomore year of High School. It was Boston’s first public arts high school and the only option as far as I was concerned. I wasn’t planning on pursuing Classical Music at first but my instructor at the time forced me to audition for the Greater Boston Youth Symphony Orchestra (GBYSO) now known as BYSO. I somehow got in, was way over my head, but managed to keep up and found a serious passion for classical music. I continued down that path and attended Boston University where I was a percussion performance major. During my undergrad I also did a study abroad program at the Royal College of Music in London and participated in the Round Top Festival.

Kayleigh: What's your interest in creating this documentary and what do you hope to show through the filming of the documentary?

John Beder: My interest in this documentary comes from my own personal experience with beta blockers back when I was actively auditioning for festivals and regularly finding myself in stressful situations. I never really took much time thinking about why my love and passion for music had turned into fear and anxiety, but before I really gave it much thought I had already left to pursue film. With "Composed," I hope to elevate that conversation surrounding performance anxiety while also paying homage to what classical musician go through to pursue their dream. People experience anxiety on a regular basis it seems but don’t really enjoy talking about it. This film, I’m hoping, will open up that conversation for not only musicians but other people struggling with anxiety while pursuing their passion. That said I’m in the early stages of filming and am still discovering the path this film will take in its final form.

John Beder: So far I’ve interviewed some great people and am always surprised with each interview. Everyone has something interesting to say about the topic and many times I’ve felt a sense of sadness that I didn’t have these conversations during my own struggles with performance anxiety. Here is the list of participants so far.

Others who’ve recently signed on include

As far as refusals are concerned I’ve had quiet a few. Some big names and others just acquaintances or former colleagues but though some are just not comfortable in front of the camera, many are hesitant to make any statements one way or another about the topic.

Kayleigh: Why is your documentary important and relevant to musicians today?

John Beder: Musicians in general though seem to express some sincere relief at the idea of talking about their struggle with performance anxiety and raising this discussion to a bigger platform. There are tons of people out there who want to talk about this subject and just don’t realize they can with this project. Many of my participants spend time thanking me for choosing the subject, while I’m simultaneously thanking them for participating in a subject that can be extremely personal.

Kayleigh: Lastly, how can people support your work and find you on the internet?

John Beder: If there are musicians or professional health experts out there wanting to participate, they can do so by backing my Kickstarter project or by contacting me directly at johnbeder@me.com. I still need participants and would love to talk to anyone willing to talk on camera. The Kickstarter project is mainly to help with travel costs that I severely underestimated for the film. Most of the funding comes from myself, but offsetting some necessary costs will make this project take shape a lot faster and allow for more voices to be heard.

From Paul Deck
Posted on February 3, 2015 at 5:07 PM
Thank you for continuing to provide useful commentary and resources on this controversial issue.