Demystifying the Nervous System and Fight or Flight Response

September 13, 2014, 10:46 AM · Most of us musicians have heard of the"fight or flight response," or at least we've felt it, but we often lack the understanding of why the nervous system functions this way. Why do we get so nervous when we speak in front of people, compete, and perform? Why do our palms sweat, our knees shake, and breath speed up? 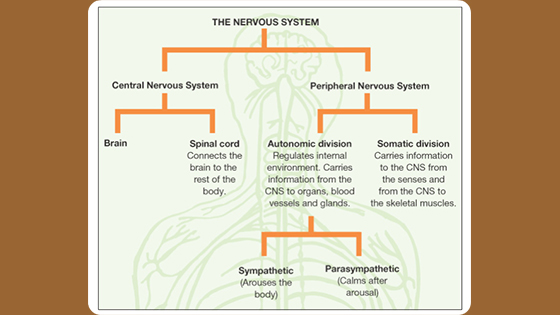 First of all, our nervous system consists of the Central Nervous System (brain and spinal cord) and the Peripheral Nervous Stem (cranial and spinal nerves), which basically work in a feedback loop of information with the motor and sensory aspects. Within the peripheral nervous system are the somatic, enteric, and autonomic systems. Somatic can be conscious or unconscious, and results in movement of skeletal muscles as a response to sensory input (ie., how you play your instrument is part of the somatic system).

Simply put, the somatic system moves your body. The enteric system consists of the 100 million neurons of your GI system, and the various actions needed for homeostasis. (Still with me? I know it's dense stuff.)

The sympathetic system is what's responsible for our "fight or flight" response, which causes our breath to shorten, eyes to dilate, heart rate to increase, and many other bodily changes under stress. Most of us know this well from performing and public speaking!

Our parasympathetic system is the compliment, in charge of day to day functions of organs, cellular repair, etc, and functioning best when the body is NOT under stress.


Many theorists believe that our sympathetic response (fight or flight) was initially our body's way of priming for combat and survival, often needed less today. Some of the things that might happen are:

There are many other possible bodily responses as well, these are just a few.

Theoretically, our body responds this way so that we can make quick decisions under pressure (like avoid a car accident or run from a bear) and move to a place of safety. When this response happens in performance situations, it's a little trickier to navigate, which explains some of the popularity of beta-blockers. Next time, I'll talk more next time about how to help your body move to a place of calm (parasympathetic control- opposite of fight or flight) under stress, without beta-blockers.

September 13, 2014 at 05:10 PM · That was a great introduction to the nervous system :) Looking forward to hearing how to control the autonomic balance...

September 15, 2014 at 02:18 PM · A nature film yesterday showed the diver filming a Leopard Seal ,the nasty one that rips penguins to pieces. Gradually it got closer and started practice lunges at his legs. He got yanked out of the icy water sharpish and said it was "One of the best experiences of his life---It was terrifying!" Both together. Elated and terrified.

Motorcycle racers enjoy the feeling that any mistake could kill them . That`s why they do it .They live on the edge. Don`t leave that out .