January 2, 2021, 3:35 PM · When I think of the learning to play the violin after a 50-year absence, I am reminded of the Dr. Seuss book “Oh, the Places You’ll Go!” My first “accidental” encounter with the violin happened as a 2009 Christmas surprise from my husband, Rich. As our entire family sat around the Christmas tree, Rich retrieved a big box from another room.

Everyone awaited my reaction as I opened the box. It was a violin! 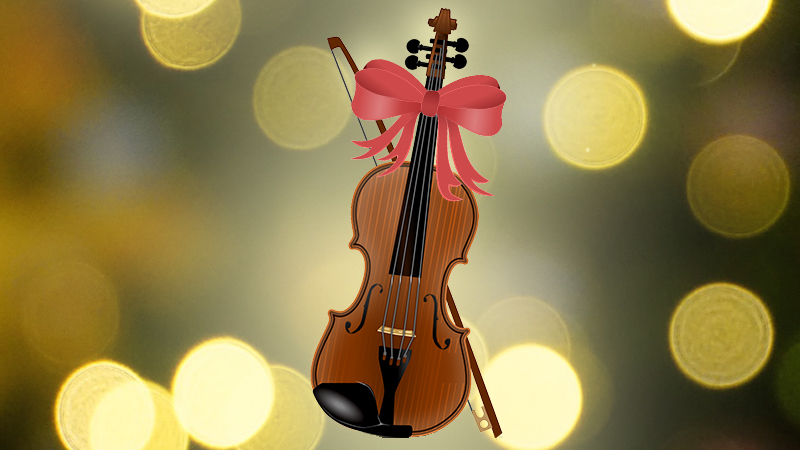 I was stunned. All I could do was stare in disbelief. My mind raced; I hadn’t played the violin in 50 years…since I was in eighth grade. What on earth was I going to do with this thing? My current passion was golf, not music. I took the violin home and moved it from room to room for about a year, periodically picking it up to test my skills. I had none.

The thought of attempting to play it scared the daylights out of me. Eventually, I mustered up enough courage to take lessons. My first teacher was an elderly professor whose teaching strategy amounted to watching me flail around on the violin with little direction from him.

Thankfully my next teacher had a plan. She placed me in a group of adult beginners who were all as bad as I was and I began to acquire the basic skills needed to play simple pieces. The experience was a flashback to my days in Junior High School and quickly became the highlight of my week.

Two years later we moved, and I had to find another teacher. In doing so, I learned that some teachers prefer teaching children and shy away from adult learners. Eventually I found Tom, a retired Navy Commander, who let me know he would take me on provided I was committed to do the work it would take to raise my skills.

Despite the growl, I kept at it and, after 18 months of weekly lessons and endless practice, Tom rewarded me by saying I was ready to join our town’s orchestra as a second violinist and handed me a rehearsal schedule. I recall showing up at the rehearsal hall, not sure of where I was supposed to go. As I approached the building a man held the door open, pointed and said, “Musicians, this way.”

I looked around to see who he was talking to before I realized it was me! I’ve been called many things in my time but "musician" was never one of them. It would be quite some time before that label felt like it fit.

I played with the local orchestra for a few years when some musicians decided to leave and join a regional orchestra. I decided to follow. We were warmly welcomed by everyone, including the conductor who, unlike our previous conductor, was quite approachable. Despite a case of nerves, I was thrilled to be there and settled into to the second violin section.

The pieces our conductor selected were compelling and challenged me to stretch my skills even further. In doing so, I began to envy the first violinists, wishing I could play the melody. But I was 68 and felt my skills had likely peaked. I was dead wrong.

In 2017, Rich and I visited Austria, a country where it seems everyone plays an instrument. We were mesmerized by its beauty, the grandeur of its architecture and the depth to which music was ingrained in its culture, thanks to the vast talents of Mozart, Strauss, Haydn, Mahler and Schubert, to name a few.

We rode bikes along the Danube and thoroughly relished hearing it celebrated when we attended a concert at which "The Blue Danube" was played. When we returned home, I couldn’t wait to learn the piece as a reminder of our trip. I boldly downloaded the first violin part and, once again, stretched my skills to become more comfortable in the upper positions required for the piece.

I practiced it over and over until I was proficient. I was in heaven. On a whim, I emailed our orchestra’s President and asked if they’d consider playing it but, given our season was on its long break, I didn’t hear back. When fall finally rolled around, I was alone when an email with our coming season’s schedule and selections came through. The Blue Danube was on it! I was as excited as a child getting a puppy for Christmas.

When Rich got home, I was mid-way through telling him my news when it dawned on me: I was going to have to play it as a second violinist! My elation turned to deflation. I learned the second violin part and showed up at our first rehearsal, happy to be back. A group of us were standing around catching up on our summer when the orchestra’s President approached us. She had a problem. The concertmaster and two other 1st violins notified her they were not returning and she needed three second violinists to step up and play first. I immediately raised my hand while half the group immediately disappeared. And, that is how I got to be an "accidental" first violinist.

Of course, I would have to learn ALL the pieces as a first violinist, a Herculean task to me at the time. Still, getting the chance to play "The Blue Danube" made it worthwhile. The remaining selections were far more difficult to learn, but I made it through my first concert as a first violinist.

However, I was challenged more with each new concert. I needed help. I no longer took lessons from Tom but heard of a new, young teacher in town. Despite being new to the area, the "buzz" over Annsley was very positive, so I scheduled a lesson. Little did I know how much I would learn from her.

I once told her if I left a lesson never having played a note, I was happy. And so it went. The more I learned, the harder I practiced. Over time, my skills had reached a new level and my confidence as a player grew. Excitement replaced the terrible performance anxiety I felt before every concert. I was playing music I never imagined I would be able to play and became an equal in my section, no longer feeling like the weakest link. Then this happened…

As my weekly lesson was winding down, Annsley announced she would soon be moving out of state to live closer to her family. She seemed happy with her decision and I was happy for her, although I would miss her terribly. As I was packing up my violin she said, "There’s one more thing. I’d like to turn some of my younger students over to you for their lessons." Say what?? I laughed out loud and asked if she was serious. She was.

"I’m not a music teacher. What on earth makes you think I can give lessons?" I asked. Her answer was a lesson in itself. "There are many naturally talented people for who learning the violin comes relatively easy. But they often don’t make good teachers because they didn’t have to work as hard at it. You have worked so hard and because of that I think you can pass what you’ve learned on to others." It took her a few minutes to convince me I could do it, but I ultimately said, "Yes."

And, that is how I became an "accidental" violin teacher. Today, at the ripe young age of 73, I spend several hours a week teaching violin to children 10-17 years old. It is a joy to see their skills develop and grow right in front of me. I once taught a semester of college and found it enormously rewarding, but it pales in comparison to teaching a child. My desk is decorated with child-written thank you notes and a vase full of hand-drawn flowers given to me as a get-well gift. My students make me laugh…often.

At the start of my very first lesson, I asked the adorable eight-year-old if she knew how to remember the names of the notes that fall on the lines of the staff. She vigorously nodded and said, “Every Good Barbie Deserves a Ferrari!” When I got done laughing, I realized times certainly had changed. They teach me as well.

Once COVID hit, I began seeing some students via Zoom. During one session with a fabulous 10-year-old, the screen kept freezing and the sound stuttered. I was about to give up when she suggested we use Google Meet. I’d never even heard of it. She walked me through it and we finished our lesson…or should I say, MY lesson. Leave it to a child to make my "accidental" job, the best job ever.

January 3, 2021 at 11:44 PM · I thoroughly enjoyed that! Reminded me of a (Okinawan) karate tale where a champion karate master who had 'natural talent' growing up ultimately asked his brother to teach his son karate because even though he was a champion he did not have to 'learn' karate, he simply got it whereas his brother had to out in the hours and knew how to teach it.

January 3, 2021 at 11:57 PM · So glad you liked it! This journey with the violin has been a totally unexpected and totally satisfying one. A gift for sure.

January 4, 2021 at 01:14 AM · What a wonderful post! I played for 6 years as a child and I have started playing again after 45 years. I have found an excellent teacher who is willing to deal with a lefty who has more drive than talent and is teaching me advanced techniques, more than just teaching me how to get through high school, and I'm finally making much progress in the bowing. I'll be needing a new bow soon and I'm excited.

January 4, 2021 at 01:14 AM · Louise your story inspired me and warmed my heart. I began violin 18 months ago as a 50 year old with no musical experience. I sometimes wish I had started sooner. But I’m thankful to have the opportunity now and I am thoroughly enjoying my journey. Thank you for sharing your story!

January 4, 2021 at 02:57 PM · I picked up the violin almost 6 years ago, at age 49, and love every minute I've spent with it. In 2019 I finally admitted I was stuck and needed a teacher, had 5 lessons before the covid shutdown, and now looking forward to live lessons again one day. Your journey Louise is very encouraging and inspiring! I'd love to imitate it in some modest way! Maybe I already am.

January 4, 2021 at 05:19 PM · You certainly are well on your way. I kept up lessons using ZOOM once my teacher moved. It was far better than no lessons at all. Hang in there. This too shall pass and you can continue your journey.

January 4, 2021 at 08:13 PM · Thank you for such an awesome and inspiring story and congratulations on such a great journey!

Thank you for your very inspiring story. I was smiling and laughing out loud as I read your progress from late restarter to student and finally to teacher. Teaching is one of the most admirable pursuits.

As a fellow 73 year old (almost) I feel that you have achieved what a lot of us aspire to experience.

Thank you and I'm sure this new year will provide additional rewarding experiences, despite the current pandemic.

January 5, 2021 at 04:12 PM · So glad you got a few chuckles out of it. I'm having a blast teaching these kids. May you too be blessed with much satisfaction for your efforts. Stay safe!