September 8, 2017, 6:55 PM · One of my stated goals when I began taking lessons five years ago was to get good enough to play as a community member with the university orchestra whose concerts I like to attend and with which my teacher plays. Every summer my teacher has a conversation with me about my readiness on that score. This year, when we discussed it at the end of July, he stated that he felt I was ready, but he didn't want me to slow down my learning process with the effort I would need to put forth to be fully prepared for the concerts. 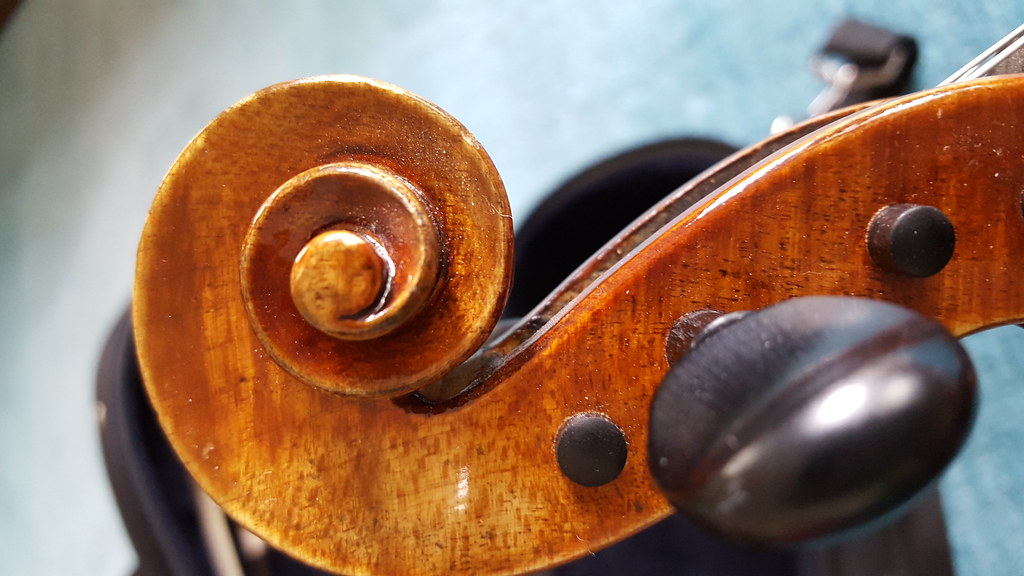 I'll be honest and say that it upset me, but I know that what he said made perfect sense so I put the idea away for the time being and focused on my lesson material. After all, that was the point of deferring, right?

A month after my teacher and I had that talk, I mentioned it to a couple of friends in chamber ensemble. One of the ladies also plays the viola for the university orchestra. She suggested I go for it anyway. Unwilling to go against my teacher's advise, I shared her comment with him to gauge his reaction, and to my surprise he agreed, but recommended I audition on both violin and viola since they really needed violas. Oh, and by the way, the auditions were being held the following week.

I wasn't worried about the violin portion of the audition because I had prepared what I wanted to play before the decision was made that I should not try this year. However,while I have had a viola for two years, I haven't done much with it, nor have I gotten comfortable with alto clef. With a week to the audition, I worked up a piece transposed from the violin to viola, along with an excerpt that I had been helping my son practice for his upcoming audition for regionals.

Proud of my accomplishment, I told my teacher at my lesson that Friday what I was going to play. He was fine with the excerpt, but suggested I play something other than the transposition. Over the weekend, I worked hard on the piece he recommended which was no problem since I played it three years ago. But I wanted to do well, so I put in as much effort as I could to polish it up.

My audition was scheduled for right after work Monday of last week so my bosses let me warm up in the board room for 20 minutes before I headed over to the school. So far so good. I found the location, only to note that the conductor wasn't there. A quick call got that sorted and it was time to show what I could do.

The audition was informal, just me and the conductor. I didn't think I was nervous, but just 6 bars into the piece things went way off course. Kindly, the conductor indicated I start over, which I did, but it was a complete disaster. A couple of false starts later, the conductor started asking a few questions. After a quick conversation, and noting that he seemed very approachable, I mentioned I had another piece prepared. Thank goodness that one went well!

My violin never left its case. The long and the short of it is, he's letting me play. Perhaps he's taking a chance on me because both my teacher and my friend contacted him, or possibly because any viola is better than no viola. At any rate, I am getting the opportunity to realize my dream.

I don't know if I will regret having the audacity to audition with a week's notice on an instrument I don't play in a clef I don't read; but so far I am enjoying the experience immensely. If nothing else, no future audition attempt will ever be as horrible as this first one.

We started rehearsal two weeks ago. Next week is our first concert. At least I can now say that alto clef is getting easier!

I understand your teacher's initial comment though. I started with a community orchestra and could play the pieces okay. But it was time consuming to learn them and stopped my technique from advancing.

As I started late, at 61, I chose to drop the orchestra and push ahead with technical ... well, I can't write mastery, but at least to take it as far as i can. Probably to ABRSM grade 8 standard. Then I can look at joining a group again.

I know many people can do both but I run out of steam after two hours (or so) per day.

September 10, 2017 at 06:06 PM · Congratulations! I have a similar story, I auditioned for my schools music major with only 6 months on the cello and working closely with my professor. He told me I wasn't ready for the audition and I knew I wasn't but he let me do it as a practice to get a feel for it. Needless to say I didn't make it in but I'm still working on it and will continue auditioning until I get get accepted.

September 11, 2017 at 07:17 AM · Perfecting a piece will not hamper your technical progress. On the contrary it will consolidate what you have already learned, and make a good base for progress.

September 11, 2017 at 04:08 PM · Orchestra cuts into your "improvement practicing" a lot. On days when you have a 2-hour rehearsal (with maybe another hour of travel to and from), do you also have time to practice? And on the other days, do you have to practice your orchestra parts? I'm feeling it this semester because I'm playing with two chamber orchestras -- both on viola. Fortunately they each only have one rehearsal per week, with schedules that include no rehearsals some weeks.

September 11, 2017 at 09:23 PM · But it's great for your reading and fluency. It will push you, and I think you will like it! I think that Suzuki's idea of "group learning" isn't just something for children, but for everyone. Being part of a group taps into something different and helpful. It enhances the experience a great deal!

September 12, 2017 at 10:13 AM · I agree with Laurie. Playing as part of a group adds a lot to your skill set and your enjoyment over and above what you get playing alone. Your understanding of music and your ability to learn and play new genres will be enhanced greatly. Besides playing with others, talking to others about music is very enriching. I'm so glad that my teacher had me play in community orchestras (more than one) as soon as I could. My understanding and love of music have been greatly enhanced.

I'm sure you will enjoy playing with the orchestra. Be thankful that you actually got to audition on the Viola.

A friend of mine who is a Violist wanted to join a community orchestra and told me of her frustration of practicing for the audition, showing up on time, waiting while others auditioned for various parts and, when her turn came the conductor looked at her viola and said: "Viola - third desk, please take that seat."