September 29, 2021, 11:08 AM · Amid a pandemic-induced madness, a blend of continued limited isolation, forgetting to bring a mask when I go outside, walking three blocks back to my house to get one, in the lack of things to talk about beyond the limited with the mantra of, "What’s new?" followed by "not much", - in the middle of all of that - I bought a viola on eBay.

It had everything going against it. The pictures on the site weren’t very good. The viola seemed to have rusty strings, a dirty tailpiece and chin rest, and a huge scratch on the surface. The background in the photos showed a messy room, the seller’s bare feet. Other photos presented a bow with only a few dangling strings, and an old case. The opening bid was very low. It was so low; nobody had bid anything when I saw it.

However, close photography shots revealed an excellent wood grain, a solid body, and when I researched the violin, I found that if it was new, it would be worth five times the starting bid. So, I went for it. 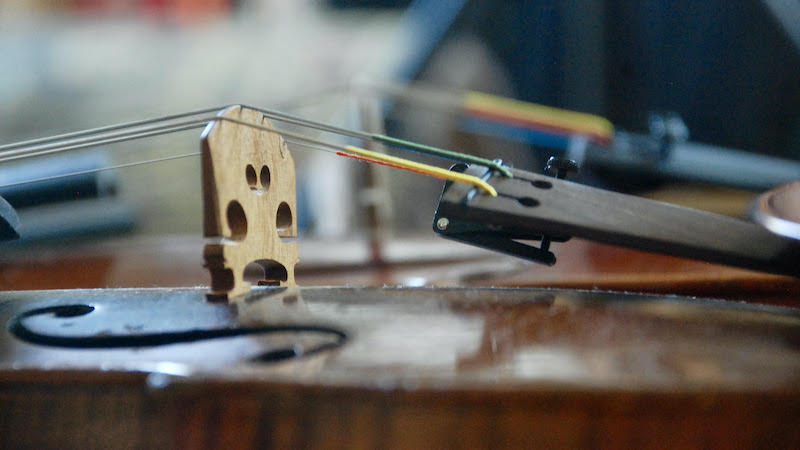 When it arrived, I took it to the David Kerr Violin shop, here in Portland, where they gave it a new tailpiece, new strings, touched up the scratch on the surface, adjusted the bridge and sound post, and cleaned it up. I got it home, tuned it up, and played it for the first time. To my delight it proved to be an excellent instrument – lively, with a deep but sweet sound. The ultimate compliment came from my teacher, Mirabai Peart. "That viola sounds better than mine!"

So, where am I going with all of this?

To my own surprise, I’ve started to play the viola in an adult student string ensemble. My teacher organized this group. None of us have ever played in a string ensemble before now, so it’s very exciting, especially after 18 months of living a life like I was in a doctor’s waiting room.

A year and a half ago, with almost three years of violin lessons under my belt, I had built up enough confidence to step out of my house and play my violin with other musicians. However, after just two ensemble string classes, and a couple of weekly old-time fiddle classes, all of that stopped cold, due to the pandemic. Group playing was almost impossible on Zoom, and individual lessons went to Skype.

I found myself playing alone in a park to some very tall trees, and to anyone who happened to pass me while I played. That is how it is now. I just played in the park yesterday for the 58th time. It’s fun, but somewhat limited.

While I do enjoy talking with curious little kids about the violin, "Can I touch it?" "Why is that called a bow?" "Why does it have those holes?" and entertaining high school kids who are skipping school, hanging out in the park, and smoking cigarettes, "Cool music, dude," I’ve wanted to spread my wings.

So, with the string ensemble, we are moving forward! We rehearse in a room with open windows and air purifiers. We wear masks, and keep our distance from each other. Every one of us has been vaccinated. We’ve had three rehearsals, and we’ll have three more before playing in the annual Halloween concert. It’s a focused group of three violinists, plus me on my new viola. We’re looking for someone to play a cello. (Hint hint.)


This is one of those situations where I really admire and envy kids who attend schools with solid, daily music programs. They get to do this every day of the week. For us it’s once a week.

We had wonderful music programs when I was a student back in the 1950’s and 60’s, but I didn’t take advantage of them. I played football. Well, to say I "played" is a bit of a stretch. Let’s just say I had a really, good seat on the bench for each game. I also spent time sitting on motor cycles, and smoking cigarettes in the back of the school during lunch period, in a failed attempt to look cool. Ah, hindsight.

Anyway, kids who do have programs in their schools, and who can play music with others daily are truly blessed.

Now, I’m perfectly aware that in writing this, I’m singing to the choir. Most of you already know how great it is to play with others, but for people in my situation – adult learners who play to bedroom walls – this is a big step. I don’t mind playing alone, but I’ve been waiting for this opportunity. It raises expectations, forces more focused practice, and strengthens listening skills. It’s like going from lessons on Zoom to lessons with the teacher in the same room. Everything opens and there is a depth to the entire experience.

So, for my fellow adult learners, I encourage you to find other musicians and play music with them. Above all the art, the skill, the craft, the hours of practice, and esoteric gobbledygook, making music is a social activity of the highest order. It is a sharing activity, and in our current political and social situation, I can’t think of anything better to pull us together as a common group of people than playing music.

Indeed, we need it. It doesn’t have to be a string ensemble. Get out there and join a Bluegrass jam. People are playing music outside. Join them. Get together with a friend and play a few tunes. Play music with your family. Play music with your neighbors. Don’t worry about what the blend of instruments may be. It just doesn’t matter. Recently, I’ve played my new viola with a friend who plays an accordion! Sounds great! My neighbor plays a banjo! Think of it. The three of us should get together.

A viola, a banjo, and an accordion walk into a bar. . .. I think that's exciting! Who knows what will happen next?

Our string ensemble performance is in three and a half weeks. Wish us luck!

October 2, 2021 at 12:52 AM · Excellent Michael. If you get a cello and bass, let me know and I will send you some easy string orchestra arrangements. Graeme.

October 2, 2021 at 12:59 AM · I see you're "right here in Portland." Portland Connecticut, right? If so, I'll be glad to audition with my bass viol! Because you again tell a chapter in your musical story that inspires and speaks to me directly, as an adult learner who plays alone to bedroom walls. Just 2 weeks ago for the first time in my life I became a student at a music school, switching to a new gamba teacher so I can be at the school so I can join an early music ensemble with other adult students. So far, disappointingly, there is no ensemble for me but they say maybe spring semester and if I have to wait until next year then I will just count this academic year as prep for my first ensemble playing whenever it finally comes. I know it's exactly what I need, and for the reasons you describe: "It raises expectations, forces more focused practice, and strengthens listening skills." To that I will add that, for me, the biggest learning challenge will be counting time, but what better way to learn it than NOT ALONE, because now the tempo and momentum is outside of me and challenging me to lock in. I have high hopes that ensemble playing will be a great new horizon, and thanks again Michael for your inspiring example!

October 2, 2021 at 02:36 PM · All of you are giving me the urge to throw together a string ensemble or a blend of viola, banjo, and accordion, or some other sort of eclectic group. I could call it the Well Aging Strings, or Well Aging Sounds, something like that. Why not, right? Out here in Portland, Oregon, I'm certain I could find all types of instruments to blend, harmonize, and see what happens. Thank you for your encouraging comments.

October 3, 2021 at 05:37 AM · Great, Michael! As a viola player who put together a string quartet, finding a cellist turned out to be the hardest part. I have lost count of how many "guest" cellists we have had. We have had a steady cellist for a couple years now who comes to most of our practices, but she always keep us guessing as to how much longer we'll have her. Best wishes!

October 3, 2021 at 02:57 PM · Your right, Francesca, the search for a final puzzle piece can be challenging. Here is a little known fact - The Beatles went through 18 drummers before finding Ringo. So if I take the comparison one step further. . .George can be first violin. . .John second violin. . .Paul on viola. . . and the search is on for our own elusive Ringo on a cello.

October 4, 2021 at 02:10 AM · You speak to me as I've done something similar. I decided to transition to viola after playing violin for years. And as a senior, the aches and pains of holding the viola is a bit of a struggle. But I keep on with the viola because it is a beautifully sounding intrument!

October 4, 2021 at 03:20 AM · Sonia and Noreen - thanks to both of you. Frankly I'm finding it quite a charismatic instrument. I really feel bad for people who have the impulse to dismiss it, and who have no idea about the communicative power it holds.

October 6, 2021 at 07:50 AM · You should definitely consider putting together that group with your accordian-playing and banjo-playing friends. Adapt a few pieces here and there, classical and non-classical, and see how far you can take it. Let us know how you get on with it!