The Well Aging Fiddler: My Sonny Rollins Summer, Playing in the Park

September 5, 2020, 12:13 PM · My daughter lives in Rockville, Maryland. I’m in Portland, Oregon. We haven’t seen each other since this insanity began, but we talk with each other on FaceTime. When I told her, I go the park and fiddle for “the picnic tables and tall trees” she shook her head and rolled her eyes. “Oh, dad,” she said, “that’s so Portland of you.” Indeed, she’s right. Around here I could take my violin, climb a tree, play music for the squirrels and birds, and nobody would blink an eye. When you live in a town where a guy rides a unicycle, dressed as Darth Vader in kilts, and playing the Star Wars theme on flaming bagpipes, just about anything can happen.

Anyway, I’ve been doing my Sellwood Park Solo Shows for almost five months now. At first, I did it as something of a challenge to break the boredom of being in a lockdown situation due to the pandemic. I mean, after watching all the seasons of “Silent Witness”, and “Law & Order SVU”, I had to do SOMETHING, right?

So, taking a cue from the great jazz saxophonist, Sonny Rollins, I’ve been spending these Covid-19 months (aka a sabbatical from whatever normal was/is/will be) walking over to Sellwood Park, and playing my violin for the picnic tables and the very tall trees. (Yes, Sonny Rollins played his sax on the Williamsburg Bridge in New York City, and I stand in a grove of Redwood trees playing a violin, but metaphorically the comparison works.) 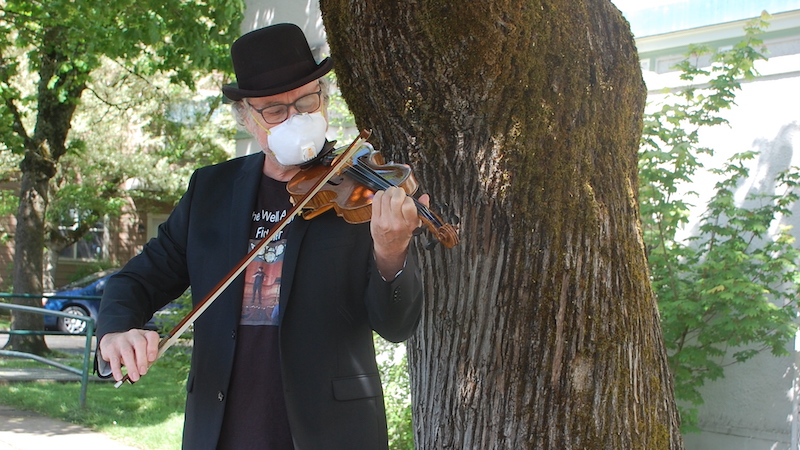 Like other adult violin students, before the pandemic, I played my violin in semiannual recitals and bi-monthly adult violin soirees, with occasional ventures into open mic shows. But, alas, recitals are on hold, soirees are not safe right now, and open mic shows are online if at all. That’s show biz during a pandemic.

So, as stated last spring, in an earlier blog, I took the bull by the horns and started to play in the park just to get it out of my system. Here is my progress report.

This has been delightful. I recommend it to anyone who needs some performance experience. In fact, even if there wasn’t a pandemic gumming up everything, getting out there and just playing music has grown from a method of getting over performance anxiety, into a real pleasure, and an actual need to play for others.

Now, let’s talk about performance anxiety. if you’re a fellow adult violin student, you know how it feels. You play in recitals two or three times a year. You only play one or two well-rehearsed pieces, and the pressure is massive. You’re scheduled to play in the middle of an afternoon, meaning you have hours of sitting around all day worried about the upcoming performance. In attempts to calm yourself down, you’d go over the passages that were most difficult, but that only seemed to exacerbate the entire situation. Then you get to where everyone will be performing, warm up with the others, try and calm down. You watch the little kids do a great job, and try to maintain your composure. Finally, you’d get up on stage, play your two songs, and try to keep your focus on what you are doing, fully aware that everyone in the room is looking at you, someone is recording the whole thing on an iPhone, two little kids are hitting each other, someone just got up to use the bathroom, a guy in the front row stifled a yawn, you see your friends and family who have taken the time to come and hear you, and your teacher is just a few feet away. Well, it probably gets worse. Performing under these circumstances can really turn the pleasure of playing music into a trial by fire. One mistake can feel catastrophic. One bad bit of intonation can distract you to the point where you mess up five more notes, and horror of horrors, you could forget what you’re doing and just stop playing. You’ve been getting ready for this for weeks, and the moment is happening. Delightful, eh?

The real bizarre factor is this – it’s highly likely the whole thing went quite well. Except for an occasional unwanted C# with the second finger, and a couple of unintentional double stops, the whole thing sounded fine. Unfortunately, for you that performance was one odd blur as you walk away from the stage, and the next freaked out student takes center stage. You probably missed the entire experience.

Now, perhaps I’m just projecting my own experiences on others, but I just don’t see this as the best way to gain some performance experience. Is there a better way?

Absolutely. If you want to get over performance anxiety – go out and play as often as you can and anywhere you can. Easy to say, right? I mean, who wants to look like some old guy standing behind a picnic table playing some little lesson tune in front of a bunch of people who are walking their dogs on the path in the park?

Well, you do! Get out there and go for it! Why not? Look, it’s really a small hump to get over, and not a mountain to climb. (I’m drinking too much coffee this morning, and it’s getting me all riled up.) Don’t overthink the whole situation. Make a list of songs you’d like to play. It doesn’t have to be many – four or five will be just fine for your first, second, or even third show. Head over to a park, or perhaps just stand in your driveway, or even in the middle of a field somewhere.

Wherever you go, don’t listen to that little voice in your head telling you this is a real bad idea. You know that voice. The one saying, “I’m not really ready for this.” or “I’m going to disturb everyone in the park” or “why do I put myself through this nonsense?” or the worst one, “ten-year-old kids can do this better than I can!” (That last one is probably true, but just ignore it, ok?) Simply, get out there, find an empty picnic table and stand next to it.

The most difficult action will be placing your violin case on the picnic table or on the ground, opening the case, and removing your violin and bow. Seriously, if you can get past that threshold, your halfway home. Tune your violin, get your bow ready, have a list in front of you so you can remember what to play, then just go for it. Play some music. That’s it.

So, what happens? Well, it isn’t magic. It is highly probably you will be very self-conscious the first time, and perhaps more so the second or third times. I’d expect that, because up to this point that is exactly how you’ve felt during those recitals. But the more often you play, your focus starts to shift from all of those worries about making errors, looking stupid, and so forth, to actually listening to the music. You go into yourself, into your music, and by pulling it in you pull the audience in with you. Oddly, the audience disappears as you drift into your own bubble. (Don’t worry. I’m not going to get all loopy-mystical-West-Coast-flaky about this.) I found my focus centers on the playing, the intonation and the phrasing, which is where it needs to be. You stop worrying and start to actually enjoy what you’re doing.

You get to a point where you think about the experience as sharing something with others. Through these performances, your confidence begins to grow, and you do something you have been hoping to do all along – you share the music. You share the experience. (Sigh, that does sound a little West-Coast-flakey. Oh well, it's hard to avoid that around here. . . .)

Does the whole thing come across as a perfect performance? Of course not, but so what? B.B. King said he’d never had a perfect performance, and he’d just fake it if he messed up. Audiences, beyond nerdy critical perfectionists, don’t really care either. You’re outside, birds are singing, boats are going up the river, people are talking, and you’re on a violin. A wrong note won’t ruin the afternoon – it’ll probably enhance it.

Also, your nerves relax. Sometimes people will talk with you. I’ve finished songs, and from somewhere over the ridge I’ll hear applause, or a woman shouted, “you play beautifully!” or a little kid will stand there smiling.

What do you do if you really mess it up? Well, laughter is great for this kind of moment. Why not? It’s just some songs in a park, not a recording session.

I’ve set some parameters for these shows. The weather has to be in the 70’s, because I don’t want my violin getting all wacked out of shape due to heat and humidity. I need to play at least two songs I’ve never performed in public, because I don’t want to settle into a comfortable, easy set. The shows should be between 10 and 20 minutes. You don’t want to push it. It’s always good to leave them wanting more.

I really think doing this kind of playing, where you put yourself out there on the edge of the diving board and just go for broke, is fun. The pressure is low, you gain some useful experience, and until the end of the pandemic, what else do you have to do? When all of this ends, you'll want to walk away having used your time for growth. Sonny Rollins gained a lot of insight playing on the Williamsburg Bridge, and he's a wonderful role model. I’ve been doing these since April, and I hope to continue until it gets rainy and cold. It will be in the 70’s this afternoon, so I’m planning on wandering down to the park and playing. Come on and join me.