With the pandemic raging even more than any of us imagined, with the darkness of winter tossing long shadows on the streets at three in the afternoon, and darkness before five, and with the holidays having a different feel this year, these next few weeks can be a bit off for everyone. Holiday shopping is limited at best, celebrations are as well, and as Laurie recently asked, what music will you miss in the coming weeks?

I’d like to take that a step further and tell a story about a year when I thought Christmas morning was going to be a complete disaster.

[Fair warning– there are no violins in the story - zip, zilch, nada. So, I suggest playing a recording of violin music after you read this. Your choice, although I strongly recommend sappy holiday tunes.]

My first wife was – and still is - Jewish. I was raised protestant. To compromise on our varied traditions, we celebrated all of them. Hannukah, Christmas, Passover, the whole show. Got a holiday? We’ll celebrate it. In my efforts to understand her faith, I joined a Torah study group at the temple. I was the token goy. It was great. We argued about everything. Indeed, we must have spent three years on Genesis alone! “Why didn’t G*d start the Bible with the first letter of the Hebrew alphabet? What’s that all about?” stuff like that. I loved it. At one point the rabbi said, “Kennedy, you’re more Jewish than half this congregation!” A great complement, but I still loved barbeque ribs.

Anyway, this fateful night happened years ago. My children were the perfect Santa Claus ages, around 4 and 7. They bought the whole story, hook, line, and flying reindeer. We were spending the holidays with my in laws in their home in Clearwater, Florida. 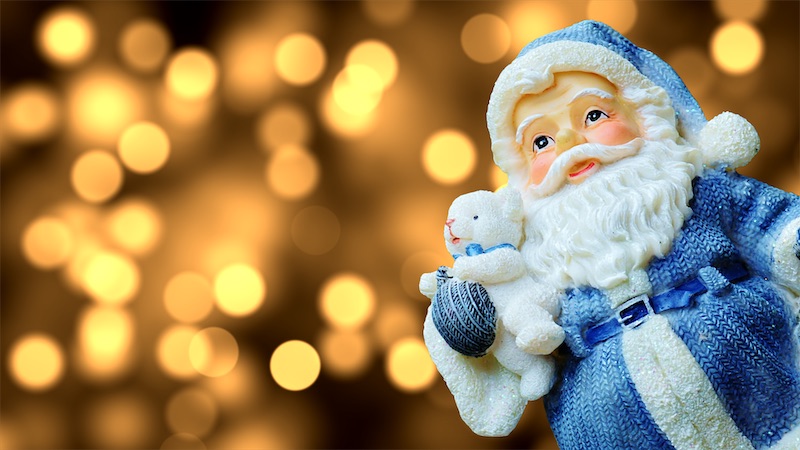 On this particular year, the last night of Hannukah fell on Christmas Eve. As was the Hannukah tradition in the family, for eight nights we would light the candles, play dreidel, sing some songs, eat latkes, and so forth. We also gave one small, usually practical gift to one another. I always got socks and underwear.

So, on this last night of Hannukah, this Christmas Eve, we lit all the candles, had a lovely dinner, sang songs, played games, gave gifts, and then the kids went off to bed to await their surprises from Santa on Christmas morning. The adults waited for an hour to make sure the kids were asleep before getting out the Santa gifts for morning.

I was always big on Christmas morning. Waking up early, knowing that just downstairs, in the living room, gifts were waiting for me. Gifts that ensured the entire morning was going to be great. That morning when the living room was one huge mess of torn paper, bright colored lights, mom and dad sipping coffee and eggnog at nine in the morning, my sisters too busy with their own stuff to pester me, and except for the probable gift of socks, and probably a bow tie, it was all going to be great.

I always did my best to make sure my children had that kind of experience. I wanted them to reach my age with fond memories of their Christmas mornings at home.

There was one big problem.

We had nothing to give them from Santa. All the presents were gone. Over the course of eight nights of Hannukah, we’d managed to give away all the gifts. Yes, we had some gifts from mom and dad, and grandparents, but Santa was coming up empty handed. The kids would find nothing from him in the morning.

I panicked for a moment and then said, “No problem. I’ll go to one of those 24-hour stores and find something. We can wrap the presents up, and the kids will be fine. “

So, I got in the car and headed for a local store.
I drove into the dark parking lot and saw a sign on the door, “Closed Christmas Eve.”

I drove to another and they were also closed. As was another, and another. For three hours I drove all over the Clearwater, St. Petersburg, Tampa area, and all I could find were occasional gas stations. I did go into one gas station, but I concluded that beef jerky would be a lousy gift.

Nobody was open, and around three in the morning I got back to the apartment emptyhanded.
I couldn’t sleep. What would I tell the kids? They were excited about Santa. Indeed, they’d spent hours talking about Santa, the North Pole, they saw holiday movies, sang songs, and were eager for the day.

I needed a miracle.

So, morning came. Right on cue, the kids were up before anyone else in the house, jumping up and down, and giggling. I decided to give shopping one more chance.

“OK, guys,” I said. “Grandpa and Grandma are still sleeping Why don’t you go and watch TV until they get up? I’ll go to the store and get some bagels for breakfast.” They agreed and sat down in front of the television set.

I headed down to the car with hopes of finding one last store to be open. After all, the signs said, “Closed Christmas Eve” but not on Christmas day. Perhaps something will be out there.

I found an open drugstore. I went down that one toy aisle all of these drug stores have. I got a Spiderman action figure, a Barbie, and a couple of games. Then I took them out to the car along with wrapping paper, ribbons, some Scotch tape, and a scissors. After I wrapped the gifts, I found a bakery with some bagels, and drove back to the apartment. I kept thinking they were pretty silly gifts. I mean these were Santa gifts! They should make a huge impact! Spiderman? Barbie? Two games? This would be fine, but not great.

Now, I had to get this stuff into the apartment without the kids seeing them. So, I put the presents down on the floor in the hall and opened the door. The kids ran up to me all excited.

“Grandpa and Grandma are up! Can we do the presents now?” They asked. They were still jumping up and down. Where do they get that energy so early in the morning?

“Sure!” I said, “oh, have you guys tinkled? You should go to the bathroom before we start.”

When they ran off to go to the bathroom, I grabbed the gifts and put them on the balcony, then closed the door.

The kids came back and I said, “Oh look! We forgot to leave the balcony door open for him, so Santa left your presents out here!”

I recovered the gifts from the balcony, set them on a table, and waited for them to be disappointed.

They were thrilled. They giggled showed their gifts to their grandparents, and were amazed that Santa came. The gifts were secondary. Santa showed up. Santa came through for them. Again, it wasn’t much, but it didn’t have to be anything beyond the gesture of getting something that affirmed they were cared for, and that is really the whole point of the holiday, isn’t it?

We’re all going to have a bit of a bumpy ride in the next few weeks, and the coming winter months are promising to be very challenging. We won’t have traditional holidays this year. They won’t be very lavish, a lot of them will be on Skype, or FaceTime, or Zoom. We’ve gone through a lot this past year, and there is more to come, but I think we’ll make it. 2020 has been a rough year, and 2021 will have difficulties as well, but we don’t have to surrender to those dark thoughts or to the divisive dynamics of our current culture. We can celebrate the little things. We can celebrate one other and the promise of being together a year from now.

I was hoping to create a perfect holiday for my children, but what I got was far better. I realized that perfection is highly overrated and far too subjective to be taken seriously. Your concept of perfect is always going to be different than mine, so why not just do your best and celebrate what you have? I haven’t seen my children or my grandchildren since all of this began, but we are still connected, and we’ll celebrate what we can celebrate. The gifts don’t matter. It’s all about the giving in whatever way we can.

OK, now go ahead and play some violin music.