The Well Aging Fiddler: Leaping into the Wind

For an hour and fifteen minutes each of us walked to the front of the area and played our tunes for friends, family members, and our fellow violinists. Some were accompanied with guitars, or a viola, and one of the mom’s sang and danced! The little kids were cute, the adult students were courageous, and the teenagers played with grace, adolescent nonchalance, and skill. All in all, it was a successful Sunday afternoon in the park.

One of the problems with doing anything outside in Oregon, in late October, is the dubious nature of the weather. The autumn trees are stunning, and the colors are breathtaking, but the temperature is flat out loopy. On that particular Sunday, the weather didn’t get above 45 degrees, with a very strong and cold wind. To make matters worse, the park – Mt. Tabor Park – is higher than the rest of the city. The wind was merciless as it charged up the side of the hill and slammed into all of us.

By the way, Mt. Tabor also an extinct volcano in the middle of an earthquake zone, in the middle of the city. Isn’t that just great? I don’t know about you, but didn’t the Greeks think Mt. Vesuvius was extinct? That didn’t go well. Didn’t everybody think Mount St. Helens, located less than 70 miles away from Portland, was just a big hill? Darn thing blew it’s top clean off into the sky. I was thinking about those things as I parked my car and walked to the covered picnic area.

Perhaps we should have postponed the concert due to the weather, but we didn’t have much choice. The park department charges a hefty, no-refund fee for these picnic areas. It wasn’t raining, so we just went with it and let things fall where they would fall.

So, for my costume, I decided to focus on something practical and warm. I wore a red tie, white shirt, long wool coat, a bowler hat, and a large green mask over my face. I was the personification of “The Son of Man” by Renee Magritte. 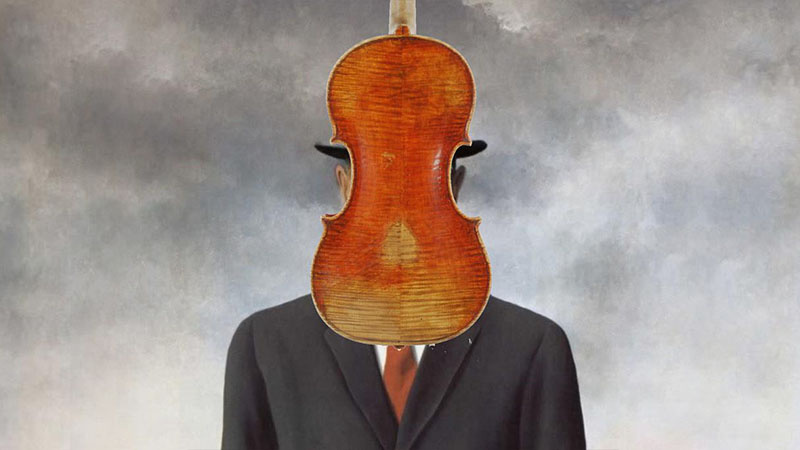 Get it? A green mask instead of a green apple over my face! I was very proud of myself, and I thought my costume was a great idea and very nifty.

It didn’t matter. I was freezing. I was also scheduled to play toward the end of the concert, meaning I would just be standing there for at least an hour before I played. As I stood there, players came to the front and played their tunes. My fingers were numb. My toes were as well, and since I was wearing a large green mask, my breath fogged my glasses and the vapor froze on the lens. I couldn’t see a thing.

The concert continued. As the wind shot through us in gusts, occasionally knocking music stands over and causing programs to blow around like autumn leaves. Small children cuddled into their parents’ arms, and everyone kept their spirits high. Then, it was my turn to play.

So, we’ll pause here. We will get back to my performance in a few paragraphs. All of that was a prelude to what I’m about to discuss.

I’ve been around for a while, and I’ve done a few things. Some of them have worked out and others have not. That’s life. Over the years, I’ve worked as an actor, director, photographer, teacher (English and Theater), poet, I wrote a novel (no . . . that’s wrong. I wrote an AWFUL novel.) I wrote a couple of other books, a couple of plays, and I got into music with a guitar playing Bluegrass jams, jug band music (King Kennedy and the Cruisers. Ever heard of us? No, I didn't think so. . .), I wrote some songs and made a CD, and for the past three and a half years I’ve been playing a violin.

That’s a lot of stuff over the past 71½ years, but it’s a lot of years too. You could say I’m either an eclectic Renaissance Man, or - more likely – I just can’t figure out what I want to be when I grow up.

What I’ve noticed through all of this is a specific pattern or learning curve that has permeated all of this activity. With each of these ventures, there have been frustrations, dead ends, plateaus and breakthroughs. Playing a violin has simply underlined this situation.

Here’s the pattern, and it doesn’t matter how many times or how many activities or art forms I’ve experienced, when I start something new, I’m right back at Day One (very Zen, eh?)

First of all, when I start something I struggle, and I’ve got to go slowly. I’ve got to trust the process to get me somewhere. I have to get the basics so they’re solid. Then I have to do them again and again. I have to do things over and over and over. When I was a photographer, I’d say I took hundreds of photographs before I took a photo I actually liked. I wrote a lot of bad poems before I wrote one that went beyond surface value, and when I memorized dialogue as an actor, it took a while to get it down.

But I just kept at it, because I knew that someday, it would all come together. I trusted the process, I trusted the belief that the technical side of things have to come together before instinct and intuition kick in, and the only way that can happen is through hard work.

However, there is more. It’s not some magical formula, or some stroll up a mountain. Things can go wrong. B.B. King, the wonderful Blues guitarist, said he’d never performed anywhere without make mistakes. He just knew how to work around them so nobody knew. I worked at a Shakespeare festival with professional actors, and each night, someone – to put it mildly – goofed. The audience, however, never knew, because these were actors who knew how to handle it. They had experience. They could improvise. They kept it alive.

The first time I learned this was in college. I was in my first play. My college roommate was directing a play for one of his theater classes. He cast me although my stage experience was almost nil. I was in My Fair Lady in high school, but just as a background person at the ball toward the end of the play. Honestly, I didn’t care about the play. I worked my way into the show so I could go to the cast parties and meet girls.

But anyway, this was my first real play. I knew the lines, the blocking, and we’d rehearsed it for hours. Still, I was terrified. So, lights came up, and we got into it. Surprisingly, it was going quite well. I was in the moment.

Then a woman in the front row, about six feet from where I was standing, whispered to her friend, “His zipper is down!”

I heard her, glanced down and realized she was right. I’d forgotten to zip up my pants! There I was. To my right stood my roommate off stage ready to kill me if I mess up. To my left was the other actor. In front of me were three hundred people, most of whom knew my zipper was down.

I had only one choice. Continuing the dialogue, I casually unbuckled my belt, unbuttoned my pants, dropped them to my knees. The room went from nervous giggles to silence. Then I straightened and tucked in my shirt, pulled up my pants, buttoned, zipped, and buckled my pants. I made it look like it was just part of the show.

My roommate got an “A” for his play, and I learned a lesson that has stuck with me all these years. Sometimes you’ve just got to go with it. All the preparation in the world is little more than ammunition for the unexpected things in life.

At some point you’ve just got to trust the process and let go. You’ve got to jump and fly and trust your wings.

Now, back to the Halloween concert on a cold, blustery afternoon, on top of an “extinct” volcano, in an earthquake zone, in the middle of a city.

Like with everything else, before playing my violin in public I tend to overthink things. I focus on being nervous. I focus on where I may make mistakes. I focus on what could go wrong. When I do this, I don’t give as good a performance as I’d like to give. I don’t think anything I’ve done with a violin has been terrible, but it’s been guarded. I didn’t allow myself to just let go and play.

The wonderful thing about this Halloween concert was I suddenly had no choice but to just let all play out. I didn’t have time to be nervous or over think anything. Like my first time on stage, I had to surrender to the moment, and not my overanalytical thoughts. I was too cold. My fingers were stiff, I had to put my glasses away because they were so fogged over, I couldn’t see where I was going, and all I wanted to do was play the music.

My teacher, Mirabai Peart, played her guitar while I zipped through Pasodoble de San Roque. I just let my fingers land without thinking about it, or worrying if I was going to come up to something difficult, or if I was making mistakes. I just wanted to hear the music.

I just let it happen. I just got into it. It’s not that I didn’t care, but I was stripped of my inhibitions. I forgot to worry about it. I’d hit that point where I was in the moment and that’s all that mattered. I went into my second tune and to my surprise, the audience started clapping along with what I was playing! Really? I was playing The Witches’ Dance by Paganini. I didn’t know that was a clap along song, did you? But, who cares, right? This whole thing was loopy. We just got into it. I was there, they were there, the wind was blowing, papers were flying, and we all had fun!

How did I do? On the one hand I think I did great. On the other hand, I don’t really know, or, oddly, even care. That wasn’t important. I wasn’t worried about being good or bad or any of that. I just wanted to play the music.

So, as awful as the weather was that day, for me it was a great success and a true awakening. Like with all the other things I’ve done, I hit that point where I want to move forward with confidence. Is everything going to be great? Nope. I’ll mess up, but I’ll also know how to get around those feelings of doubt.

It’s scary letting go, but at some point, you have to trust yourself and leap.