August 22, 2019, 9:04 AM · I understand the 10,000-hour "rule" came from Malcolm Gladwell and his book, Outliers. Gladwell uses The Beatles and Bill Gates as examples of working obsessively for years to achieve their success. While it is a nice round number, it is - like all pop culture solutions - as much fantasy as fiction. Indeed, psychologist K. Anders Ericsson, who came up with the whole idea to start with, has debunked Gladwell's rather simplistic application of this dubious rule.

For one thing, The Beatles never came close to 10,000 hours. Gladwell claims they hit that magic number playing in clubs in Hamburg, Germany during the early 60's, and other clubs in Liverpool, England. 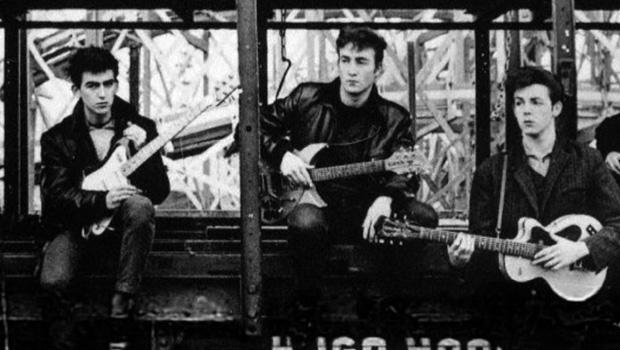 The Beatles in Hamburg.

However, research shows that while they did eight-hour gigs for six or seven nights a week, they were often alternating their sets with another band - Rory Storm and The Hurricanes. Even if they had played seven days a week for eight hours a day, they weren't in Germany long enough to hit that magic 10,000 anyway.

Also, the guy who was their drummer during this mythical 10,000 hours, Pete Best, was fired for poor drumming! It seems just banging on drums for 10,000 hours didn't really do him any good. Plus, what happened to that other band playing opposite sets with The Beatles? Well, Rory Storm and The Hurricanes, who played as much or more than The Beatles faded into obscurity with one exception - their drummer, a guy named Richard Starkey who went by the stage name, Ringo Starr, often substituted for Pete Best with The Beatles, when Best didn't show up for gigs.

When Best was fired from The Beatles, they hired Ringo, and the rest was, and continues to be, history. It seems 10,000 hours of hard work (or 10,000 hours of work while on diet pills and other stimulants, which The Beatles often used in Germany) don't guarantee success. I'd lean toward the belief that quality of the use of time is a huge a measure of success, along with being in the right place at the right time, knowing the right people, and a generous helping of luck.

Many years ago, I worked for a period of time with Broadway actors. I can say that 95% of them were hardworking, dedicated, and disciplined individuals. The talent was oozing out of the walls. And yet, less than a handful went on to long-term careers.

Of the roughly 50 actors I worked with, I'd say less than five or six are still working - one was in Shawshank Redemption, one was in The Soprano's, one won a Tony Award (yes this is shameless passive aggressive almost-but-not-quite namedropping) but that's it. Talent and skill are only part of the equation. Alas, like it or not, that's show biz.

Personally, I'll never hit 10,000 hours. It's just not in the cards for me. I started this entire violin life just 2 1/4 years ago when I was about to turn 68. and now I'm 70. It ain't gonna happen, but I don't really care. I'm just enjoying the ride. I suggest focusing less on the end of the numbers game, and simply enjoy the journey.

As George Harrison said once, "When we were in Germany we really a tight band and we were amazing. We really had something we've never had since." Only one rather poor recording remains from those days. So don't look for the mythical 10,000 hours as a magical end to your mystery tour. Enjoy and work hard in each individual hour. Feel the frustrations, the triumphs, the ups and the downs. That's what's really important.

August 23, 2019 at 08:10 PM · Interesting that George Harrison would say that they were most "tight" when playing every night in Germany. I have also had that experience with 3 bands, performing the same material, every night, every week. The ensemble gets to the next level of quality. There are moments of almost magical e.s.p. communication. It was not boring for me. Maybe that is also why I enjoy doing Opera or music theater orchestra work. Those repeat performances move you from 95% to 99% good.

August 27, 2019 at 04:00 AM · Agree with JQ on this aspect of Musical Theatre ~ During a sabbatical from concert touring, I had a great opportunity to play the full run of "Evita!" at the Shubert Theatre in the downtown

class-mate of mine, A. LW!!! The "Evita!" Orchestra was 'hot' and full of snazz attitude with the

every night and on the Wednesday & Saturday Matinee Days with an afternoon performance,

off for a Chicago 'loop' dinner, then back for the evening show. It was such a respite after major

losses in my life & brought the Sun back into an in mourning life ...

As we got to know the cast members - mostly out of New York or Philly, we began to merge as

an 'Evita!' Family, having 'inside' jokes and truly liking each other! That full year was one of the

most joyful of my life and without (as my London 'pal', Andrew LW, put it, 'you're supposed to be playing the Brahms Violin Concerto'!!!! Yes, the musical score of 'Evita!' Is Latin - Rock &

(as Mike Myers would say), "groovey', yet it contains some glorious melodies as all know in his

epic, "Don't Cry for Me, Argentina!' which actually was musically very interesting to play in the

first violins, and in time, might later become known as a "classic"!!!

night excepting Monday's - which are 'dark' in the Theatre, but nevertheless enjoying returning

Chicago!!! Personally, I couldn't wait for the Show Stopper number, "Buenos Aires", which was

so racey yet professionally played sort of underneath the radar, yet seductively, one was hard

pressed to leave the Shubert to go home and just sleep!!! One was exhilarated for hours after

the show!!! I Loved it and would relish playing "Evita!" again - and perhaps in New York City!!!

Btw, we were told 'the best Evita Orchestra was our Shubert Theatre Chicago Orchestra!!" Now

In writing about my concertising sabbatical Year, altho' late here, I'm smiling & remembering the marvellous musicians and singers I was privileged to work with ~ I wouldn't trade that Year

of Sunshine for Anything!!!