June 15, 2019, 9:13 AM · The other night I walked down a narrow staircase, stepped into a basement bar, took out my violin and played some blues in an open mic show. 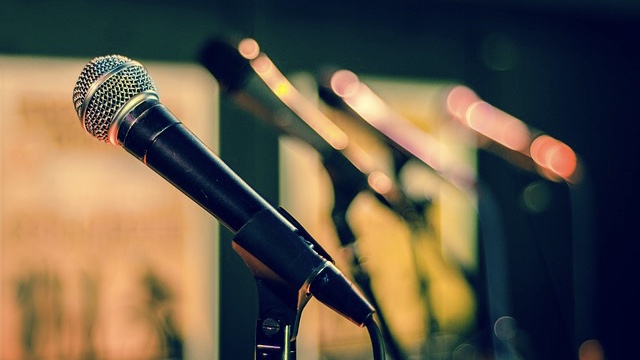 It was fun. Although I hadn’t played any open mic shows in about three years, I thought I’d take the plunge and go for it. I had that feeling we often get when stepping into a swimming pool, and that sense of commitment just before we tumble under the water and surrender to the sensations. As you know, once you're in, you’re fine. Often it’s just that little push that gets all of us going from one situation to another.

If you’ve never attended an open mic show, and you don’t know where to begin to find one, go online and search for open mics in your area. So, let’s imagine you live here in Portland, Oregon. Go to your computer and type “Open Mic Nights in Portland”. You’ll get a large choice of venues, and a website sponsored by OpenMic.US filled with opportunities: https://www.openmicportland.com/

Here in Portland, according to the website, we have 26 venues hosting open mic evenings. Now, we are a larger city than many others, so – for example - if you are in Traverse City, Michigan, take a look at the website, https://openmikes.org/

Type in your zip code and you’ll find four opportunities.

So this stuff is out there. It just takes a little research.

Now, once you find something that interests you, call them up and make sure the venue continues to host the open mic. The Internet is a little messy, and sometimes people forget to remove information. I went to a wonderful open mic show for a couple of years until they stopped having the shows. Sadly, although it hasn’t been around for over two years, Yelp still lists the open mic as one of the best in Portland.

So, to save yourself some trouble, call them and make sure it’s still happening.

Next, just go without any plans to perform so you can sit in the audience and see if this is the kind of place where you’d enjoy playing music. Chances are it will be fine, but it is always wise to check because there can be some real doozies out there that are poorly organized, too loud, too empty, or –shall we say – a bit dodgy.

When you go, get there for the start of the evening, and look for the following:

Again, chances are things will be fine. Open mic audiences are usually supportive, encouraging, forgiving, and up for anything. Still, it doesn’t hurt to see whether you’ll like what you find.

So, what’s next? Well, that’s really up to you. While most open mic shows feature singer/songwriters playing guitars and singing original songs, they also have comedians, poets, pianists, duos, trio’s, harmonicas, mandolins, and so on. Some even have a house band available to play along with you as you perform.

It can be a delightful free-for-all situation. One performer may be amazing. The next may be a bit rough around the edges, and a third could be weepy. It’s really something of an organized window into spontaneity and surprise. That’s the real fun of these shows.

You could feel blown away by the talent or you could shake your head and wonder.

Now, to move things along, I’m not going to write about the little do’s and don’t of open mic shows in this blog. For that you can take a look at a video I posed on YouTube called, Open Mic Night Survival: Tips Strategies, and Ideas. That covers the general things you’ll want to know about doing an open mic evening, so I suggest you take a look at the video for the basics.

Let’s get back to the other night when I took a violin an open mic here in Portland.

Like I said earlier, I played a lot of open mic shows when I was singing with my guitar. I've done the good, the bad, and the awful. I’ve played in charming wine bars, restaurants, dive bars, and so on. Hence, I selected one of the best open mic venues here in Portland called, the Eastburn Public House.

Sign-up started at 6:30 with the show starting at 7 p.m. This venue is well organized, has a great sound system, the host is gracious and energetic, and the crowd was big but respectful of the performers. They do a lottery system for the show where names are tossed into a jar and then the list for the night is created from those random names. While they usually give performers two songs, this was a very crowded night, so we all did one song each. As it turned out, I was the opening act.

Of course, what was unique about the performance was the fact that I brought in a violin. In all my years and over the 300+ open mic shows, I’d never seen a violin in any of these evenings. Hence, that was flat-out-cool all by itself.

Also, I just turned 70 years old. Subsequently, I was 35 to 45 years older than most of the people in the room. Now, if you want to stand out in a crowd, if you want to be unique, if you want people to glance at you and wonder about you, there is nothing like getting older to set you apart from the maddening crowd. There is a bit of mystery about a person my age showing up in a situation like that. Just walk in with the attitude of, " Hey, kids, sit back and listen because I've got this." Some open mic evenings seem to draw an older audience, some are mixed with all ages, but this one – on this particular night – was a young crowd. I was a stranger in a bit of a strange, but welcoming land. Also, when they saw my violin they immediately paid attention to what I was doing.

I played a medley of blues songs. I’d never played my violin in a public venue. Beyond recitals, student soiree’s, a couple of Bluegrass jams, and my grandchildren, this was the first time I’d put my solo fiddle out there. I’m glad to say I did a rather adequate job. Once I was done I received warm and enthusiastic applause.

After I opened the show, a woman sang a beautiful ballad. Next they presented two excellent comedians, followed by a kid who did an angry song and the evening progressed from there.

The bottom line is this – it was fun.

Now, you may be thinking, “I only play classical music. I doubt a quiet piece would go across in a basement bar. Alas, I'm doomed to concert halls and recitals in poorly ventilated rooms!" Ah, but do not fret. I have something for you as well. Check out Classical Revolution. This is a growing movement among classical music lovers. They offer monthly open mic nights with a variety of combinations of orchestral instruments in an informal setting that celebrates chamber music and brings it to the people.

So, I’ll be doing this again. How about you? It’s fun, great experience, and it gets you out there.

June 17, 2019 at 03:36 AM · I’m now a “regular” at s local Seattle open mic (Hopvine). At first, I tried to play solo violin - s little thin. Then with my electric, used a looper and played with the harmonies. But, what I’ve excelled at is NOT taking a spot, but having the MC announce me being there, and play along with others “by ear” which helps my improvisation skill, and sounds nice - even with many “original” songs. I support the idea of “go for it”.

June 17, 2019 at 03:06 PM · I met my husband at an open mic. I was playing my violin and he came in, picked up a guitar from another musician, and started accompanying me. We had so much fun we continued to find opportunities to play together, and were married 2 years later. You never know what can happen at an open mic!

June 18, 2019 at 03:39 PM · I'm glad to see other violinists have been attending open mic shows. I was up in Seattle a week ago. If I'd known about the Hopvine Open Mic evening, I would have dropped by to listen. Playing along with others sounds like a great idea. Also, I love the romantic story of the violinist and guitarist meeting at an open mic. Well done!

June 18, 2019 at 07:49 PM · Classical Revolution sounds like a great idea. I play regularly in bluegrass jams (and the occasional open mic if I have time to hook up with a few other players), but it's not something you normally associate with classical music. I'd love such an opportunity - as it is, sometimes I'll sidle up to another fiddler and start playing the Bach Double to see if they take the bait.

June 18, 2019 at 08:51 PM · Indeed, Charlie, it's a great idea, and from what I understand it's a growing concept of taking classical music out of the concert hall and letting it breathe in a restaurant or some other informal venue. If you go to their website, "Classical Revolution" and click on "Chapters" you'll find a list of links to all the chapters around the country. https://www.classicalrevolution.org/chapters/

After attending a morning course on Folk fiddle I was asked to attend and play at a local pub open session and initially played The Connaught man's Rambles. According to my 'book' each part A and B is to be played twice; imagine my 'horror' when playing the B part that the local rule was to play each part three times; imagine my horror at the 'noise' that I was causing; I quickly recomposed my playing so as to blend in with the others. After 30 minutes I was given the chance of redemption and I told of the style of my next tune. Unfortunately it was relayed as a 'plazma' tune instead of a Klezmer tune; fortunately (this to my benefit) nobody knew it and I gave a very fine solo ! Stewart (Plasma is a TV type!)