The Well Aging Fiddler: Into the Labyrinth of Learning the Violin

April 28, 2019, 4:33 PM · Have you ever been in a real labyrinth? I mean the real thing where you go to someone’s farm, pay a few dollars, and dive into a huge corn stalk maze. If not, give it a try but know you’re going to need a lot of time for one of these adventures. Why? Because you can get lost for hours. You'll swear you’ve been down the same path over and over and over again. And you'll get that sinking feeling when you realize you have indeed been down the same path over and over and over again. Next autumn, when the corn has been harvested and some farmers make elaborate puzzles out of their cornfields, take a day and go through the labyrinth. (Bring some water and make sure you go to the bathroom/restroom/WC first. This is going to take a while.) 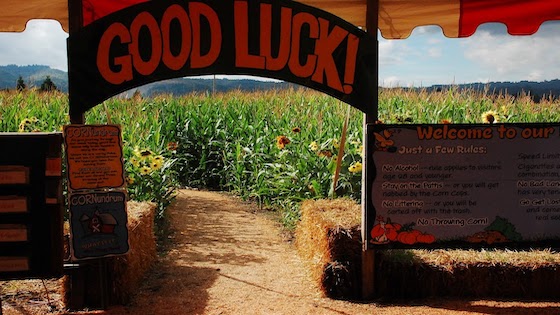 What starts out as curious and novel quickly becomes a bit more confusing and challenging. Plus, after a while, it all starts to look the same. The left turn, the right turn, the fork in the road, the tricks your memory plays on you, and the realization that you can’t just walk away, because walking through is your only choice.

Now, to be fair, many of these labyrinths number the path from one to ten, so you can have a sense of progress, and halfway through – near Number Five – there may be a door where you can step out and abandon the whole thing for the gift shop, apples, and cider. Indeed, if you are exploring with small children, this may be a good place to abandon the whole venture. Also, if you didn’t bother to go to the bathroom/restroom/WC like I suggested, here’s your chance.

This whole thing could take two or more hours to complete, so be ready for something that can’t be solved with the swipe of a finger on a computer. The same is true for learning a violin, viola, cello, bass, or any other musical instrument.

(Were you wondering how I'd get this to become a metaphor for violin? Well, that was it.)


At this point - two years in – I’m in the midst of the violin student labyrinth. I’ve come to a point where I can no longer shrug it off as a curiosity in the context of wondering whether this is simply a phase I’m going through. I’ve invested hundreds of hours of practice, dozens of lessons, and went through too many humiliating, but enlightening performance situations playing soirees, recitals, jams, and one pub performance. Stepping back or escaping through a side door isn’t an option I elect to consider.

One advantage I have is my age. I’ll be 70 at the end of May. While the violin has been only two of those seventy years, I’ve been down a few other roads, dead ends, potholes, and switchbacks. I have a roadmap. (See? That’s my age showing. I didn’t say GPS.)

I’ve worked as an actor, director, short story writer, poet, photographer, teacher, guitar, lute, and mandolin player, songwriter, and singer. Some of these adventures worked out quite well. Some were full of side traps and diversions. Some made promises they knew they couldn’t keep while happily taking money.

There is a cartoon in The New Yorker by Barbara Smaller. A woman is holding some books to her chest and talking with a man in what appears to be an office. The caption reads, “I want to write what I know, but all I know is writing workshops.” When I worked on a Masters Degree with an emphasis on writing at the University of Minnesota, that cartoon literally illustrated a situation a lot of students experienced. All they knew were writing classes and summer seminars in writing. They believed by being near their professor/writers that they’d somehow by magic, or osmosis, or who knows what, become great writers because they knew the lingo, read the “correct” stuff, and knew how to critique each other’s work.

Most of them never ended up as writers. They could have saved thousands of dollars by simply listening to one line by Kurt Vonnegut, Jr. “You can or you can’t, and you do or you don’t.” If you want to be a writer, then write and write and write. Often, you have to step over the edge and see what the fall is like without degrees and professorial nods.

I took training as an actor. I learned how to mime (totally useless exercises) how to really, really FEEL (therapy would have helped), and I allowed my ego to lead me by the nose. I hung out with “theater people”, and never thought much about the fact that nobody ever paid me to act, that my reviews were iffy.


Ironically, I became a theater director and even ran my own theater without any formal training whatsoever. Someone heard I was acting with a particular acting company and assumed I could direct, so they asked me to direct their big community production of “The Sound of Music”. I said yes, and just imitated everyone I’d ever known to be a director. The show was a smash hit, and I went on to direct plays for 25 years.

At one point, I worked as a stage manager at the National Playwrights Conference at the O’Neill Theater Center. The problem was I didn’t have one bit of experience as a stage manager. All I had was a briefcase with a book inside called something like, “How to be a Stage Manager.” I was working with Broadway actors on new plays. I was terrified, and yet I pulled it off. If they asked a question I didn’t know, I excused myself, walked away to a bathroom, opened my briefcase, consulted the book, then went back and told them what to do. It worked. I just faked confidence, and after a while I actually knew what I was doing. I gave the book away.

I took guitar lessons, and the teacher, a great guitarist named Geoff Shannon, gave me some priceless advice. “If you want to improve, you’ve got play with pickers who are better than you.” Well, I was teaching at Southwest High School in Minneapolis. On that staff were some amazing guitarists, banjo players, mandolin players, singers, and other players who were way beyond my abilities. So I organized jam sessions during our lunch periods called, “Lunch Jam”. That did the trick. They couldn’t resist the siren call, and once or twice a week we’d meet and jam out on four or five songs before heading back to class. I watched, learned, and improved. We even performed at the Minneapolis Battle of the Jug Bands under the title, King Kennedy and the Cruisers. The crowds went wild.

Our equipment wasn’t anything fancy. Yes, a couple Martin guitars, or a Taylor, a banjo, a mandolin, and also a ukulele, a washboard, a washtub bass, a jug and a comb. The equipment was really secondary to the music inside the players. They could or they couldn’t and they did or they didn’t.

When I did photography for around 40 years I ran into two types of photographers. There were the good photographers, and the ones who weren’t very good. The good ones jumped right in and knew the best part of a camera was their brain. The others were dependent on the right lens, the correct aperture, and the most expensive SLR or medium format camera. They bought equipment over and over looking for the magic. The good ones didn’t need to care about that. They could make art out of a pinhole.

From what I’m seeing in the world of strings, like in the other art forms, there are a few things out there to tempt you away from your primary goal – to play a violin as well as you possibly can. Like Odysseus, there are temptations galore to divert your focus. In looking at discussions and questions raised by violin students, I see a lot of second-guessing, insecurities because of age, nit picking, and so on. I see people arguing about things that, in the end, are so individual to each person, that they aren't really work the stress.

So, let me say this – if you want to make it through this labyrinth, if you want a road map, you’ve got to do two tasks; practice as effectively as you can, and perform as often as possible. That's it. You’re never going to get anywhere looking sideways. Believe in yourself, make thousands of mistakes, laugh a lot, and keep focused.

As with the corn labyrinth, at the end of the whole venture, when you come to that open view beyond those limited walls of corn, there is more of a sense of relief as opposed to celebration. Why? Well, the entire objective correlative of the labyrinth isn't concerned with finishing the task. It's about the exploring journey and how you did it.

So, how are you doing? Are you methodical? Do you get angry? Frustrated? Do you panic? Do you use shortcuts? Do you blame others for your lack of progress? Do you think about exiting at the halfway point? Doubts? How is your stamina? Would you do it again? And most importantly – do you allow yourself to enjoy the whole experience? The ups, the downs, the mistakes, the victories, and the people you meet? If not, then why do it in the first place?

For my part this whole thing is delightful. I go into my weekly lessons, make old mistakes, try new things, make new mistakes, and move forward. I practice every day, I perform when I can, and I have no idea where any of this will end up or when it will end. Will I hold up in a physical sense? Will my fingers remain nimble as I advance in my 70’s? Will my body stay fit? Will my mind remain active? How much time do I have? Five years? Ten? Fifteen? Twenty? (Now that would be sweet…). I really can’t afford to think about a finishing line to this journey. I’ll just keep it all rolling. I hope you do as well.

May 1, 2019 at 09:03 PM · That's wonderful. I studied violin in college in the 70's. I gave it up in 1980 and 5 years ago I took it up again. I posted a video on you-tube "Orville theme played on violin". In the 70's it was very difficult to see yourself on video, unless you had access to a video camera and video tape recorder. Now we have smart phone cameras that nobody could have imagined 40 years ago.