February 24, 2019, 3:21 PM · We have a record store here in Portland called Music Millennium. They’ve been here since 1969 and they sell just about anything you’d like when it comes to recorded music. Records and CD’s are all over the place in small rooms, large rooms, up flights of stairs, up more stairs, in bins, boxes, wall racks, and so forth. If you want it, they probably have it.

So, a few months ago, when I became fascinated with contemporary Scandinavian/Nordic folk music, I went there to see what I could find. 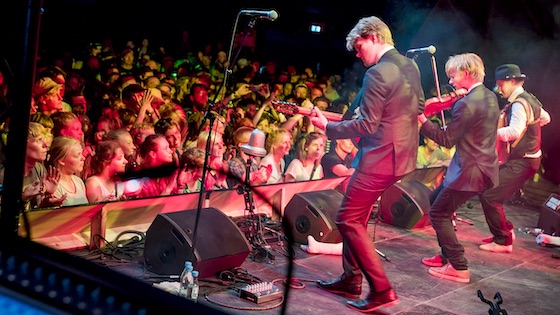 I walked in and strolled through two rooms of used records – mostly rock. Went through a small door into another room of records – jazz, soundtracks, funk, metal, and so forth. Then I entered a larger room filled with CD’s – classical, blues, jazz, and country. I entered another large room with more CD’s – soul, pop, R&B, and so forth. I walked up some stairs to an area of new records, then up through an almost hidden staircase to a mezzanine that hugged the walls above the room below. Here were CD’s and records of blues and international music. I walked around a large rack of CD’s to the back side, and in the lower left hand corner of the bin I found what I was looking for –CD’s under the label, “Norway, Sweden, Finland, Denmark and Miscellaneous.” I saw about five CD’s with titles like “Folk Songs of Norway” and “Traditional Swedish Folk Music”.

Part of me was disappointed. Part of me was quietly thrilled – I realized I was onto something amazing. Out there in those lands of long winter nights and endless summer days, were people playing imaginative, exciting, and quality music. Contemporary Nordic folk music is great.

Now, perhaps I’m a bit of a music snob, but I’ll just put this right out there – I can’t stand most contemporary popular music. I don’t want to get into it too much beyond saying it just doesn’t do much for me, and I’ll leave it at that. I think it’s yucky.

To be somewhat fair, I know for decades that one of the goals of popular music has been to sell and sell and sell, make a lot of money, and then move on to the next shooting star. It's a business. However, it also seems to me that at some time, it also had a soul and a sense of immediacy. It cared about quality. I don’t find that in todays over the top massive stage extravaganzas, auto tunes and lip-synched, choreographed, patronizing in-your-face skin shows.

Having said that, I know there is still a lot of great music all over the place. With some work, I find amazing contemporary music in small venues, and independently produced recordings within the fabric of America’s communities. There’s some great stuff out there, but it isn’t getting the well-deserved attention it needs. The big companies are not interested in quality. They’re into making money no matter how bad the music.

And that’s what brings me to what I’ve found in Nordic music. This music is great. The players and groups I’m going to introduce to you play traditional instruments, but they don’t hold back by treating the tradition as inflexible and safe. They push the boundaries. They explore the music and make it sing. They take risks.

So let me introduce you to what I’ve found. I do this knowing some of you probably know about these musicians. I’m one of those people who discover things long after everyone else considered it passé. Want an example? I started listening to Bruce Springsteen in the late 80’s. It seems he’d been around for over a decade, but I missed it. In my defense, I was busy raising kids and listening to songs from Sesame Street.

Anyway, here is a short list of some imaginative Nordic music for you to check out.

1. Danish String Quartet –Now, these guys have been around for a while playing classical music, but they put out two CD’s of Scandinavian folk music arranged for string quartet, and the results are fascinating.

2. Dreamer’s Circus – One of the members of the Danish String Quartet, Rune Tonsgaard Sørensen, participates in Dreamer’s Circus. They will be playing in Portland this April and I’m excited to attend the show.

3. Trolska Polska – I have no idea who they are, but I love the music.

4. Våsen – They’ve been around for years. When I lived in Minneapolis they’d play every year at the Cedar Cultural Center, just 15 minutes from my house. I never went! It’s amazing what can be happening right around the corner and I never knew.

5. Nordic – Great group. Awful name. It’s like being some American/Canadian group and calling themselves something like The Band. It’ll never sell. right? Too generic, right? For the life of me, I can’t find their music anywhere except on YouTube.

6. Annbjørg Lien & Roger Tallroth – These people are like Tina Turner and Mick Jagger in the Nordic folk world. Who knew?

So, there is a small sample of some amazing music. I’m not an expert in any of this. At this point I’m like a kid in a candy store. It’s all new flavors and textures. Do you have any suggestions of who else is out there? I’m sure I’ve just scratched the surface, and I’d really like to know other Nordic musicians.

Plus, it’s perfect music to get all of us through these late winter snowstorms as we drift into spring.

Just a small selection of what’s out there!

February 26, 2019 at 07:20 PM · Oooo Vivien I really like that Shetland Reel! I also want to know about the one fiddler's super-blingy fiddle!

February 27, 2019 at 07:41 AM · The "super-blingy fiddle" is a Hardanger fiddle (or Hardingefele) which has four "regular" and four sympathetic strings. https://en.wikipedia.org/wiki/Hardanger_fiddle

I adore the sound of this instrument. When composing the soundtrack for the Lord of the Rings trilogy, Howard Shore chose the Hardanger fiddle for the "Rohan theme", because to him it best reflects the nordic / anglo-saxon culture Rohan is based on.

Held every April in Edinburgh is the Northern Streams festival - concerts and workshops. We've had so many lovely musicians come and share their tunes with us... I especially enjoyed the two mentioned above.

February 28, 2019 at 01:08 PM · I first heard Scandinavian Folk Music live when playing with a Traditional Maritime Folk Music Band at the Cardiff Maritime Festival some 20 years ago, and, as a fiddler myself, I realised I had heard something different which struck a chord. The music was melodic, complicated, atmospheric and exciting, and great to play and listen to! I'm the leader of the Sheffield Traditional Fiddlers Society and we play several Scandinavian tunes, they are very popular with the members because they have harmonising parts, the tunes are sometimes moody and dark with names like 'Trollspolska', but at other times cheerful and optimistic, check out Eklundapolska no 3. Some tunes are, to me, weird sounding with other influences, possibly from further East, but this only adds spice. Scandinavian Folk Music has become more popular in the UK but I believe it has further to go, many of the fiddlers I know enjoy playing, listening and dancing to it, I only wish I could afford a Hardanger fiddle!

Here are some Danish names:

February 28, 2019 at 11:53 PM · All of this looks and sounds great. I love the energy and imagination in these selections. Plus, a Hardanger fiddle. . . oh dear. . . what a temptation. Thanks for the suggestions and information.