The Well-Aging Fiddler: Sisyphus goes to a jam

I think I’ll call it Sisyphus – the king of Ephedra whom the Gods condemned to rolling a huge bolder up a mountain, only to have it roll back to bottom. He had to roll it up the mountain over and over and over for eternity and always watch it roll back down.

Each day I tune my violin, clean the strings, tighten the bow, and play scales, double-stops, etudes, chords, improvisations, songs, and so forth over and over again. The difference from the Greek myth is that while Sisyphus is probably having an awful day, I enjoy doing this. Frankly, I’m sure Sisyphus developed serious problems with his back. I can only hope while he watched the rock fall down the mountain, he did some stretching, yoga, and took some long, soothing soaks in a hot spring to help with the pain.

I am happy to report my pitch is improving quite a bit, and my overall technique is better. However, just when I thought I’d been making some real progress, I realized I couldn’t be playing alone in a bedroom forever. I need to get out and play with others.

Now, I imagine kids can find others to play with in their schools and music programs. That is how it should be, because playing music with others is a natural event, and it’s a lot of fun.

But where do adults go? If you’re like me, you didn’t start to play a violin when you were in school, but became enamored with the instrument later in life. Of course, the biggest problem for adults is their tendency to avoid stressful situations. We tend to think too much about the possibilities of things going wrong, or of embarrassing ourselves in front of others.


After all, as seasoned adults, we can all sit around and remember terrible tales of embarrassing things that happened to us over the years.

Here are a few of my greatest hits. (Or lowest moments). Take your pick.

The time I when I went to a yoga class, took off my sweat shirt and sweat pants, walked across the room, sat on the mat, looked down and realized I’d failed to slip on my gym shorts. I stood up in my boxer briefs, calmly walked to the closet and put my sweat pants back on.

The time I was at a lake, walking on a dock, turned to wave at someone, and fully dressed, I fell right off the edge into the water.

The time I took a girl to Homecoming, walked her home, stood in her front yard, chickened out on kissing her good-night, gave her a little punch on her arm, turned to my right and smacked my nose into a tree.

I could go on but I think I’ve made my point. As adults, we have quite a backlog of moments we’d like to forget, so why create opportunities for more? Lets face it. We take things far too seriously. (I blame Facebook and Instagram, but that’s a whole other blog posting…)

In that yoga class, to my embarrassment, nobody noticed I was walking around in my undies. Let’s not think about that too much….

My grandmother, who I was waving to when I fell off the dock, loved it, collapsed on the ground laughing, and thought I’d staged the whole thing.

I went to my 25th high school reunion and saw the girl I didn’t kiss. I told her about the episode, and that I’d had a short story published based on that night. She had no memory of any of it, shook her head, and walked away. (Rather George Costanza of me, eh?)


So, let’s lighten up. We’re not as loopy as we think.

The point is this – if you aren’t playing music with others, you’re really missing out of a lot of fun.

So when you get to where I am – my pitch isn’t amazing but it’s not all that bad – my string crossings are improving – I’m feeling more confident about the whole thing so it’s time to step out.

The thing to do is to avoid thinking about it too much. Avoid the idea, “I’m just not ready yet.” You’ve got to get beyond all of that, because - let’s face it. No offense, but don' go for perfection. You’ll never be ready. You’re going to mess it up at some point. It’s going to happen, and in a way that’s quite a freeing realization. We all screw things up.

So, just get out there.

Now the second part – where do you find others to play with?

Well, if you’re taking lessons, ask your teacher for some suggestions. Perhaps there are other adult students, or if you’re really brave – kids, who would like to play in a small group. (I say kids because let’s face it. Some of those little fiddlers can play rings around us.)

I suggest looking online for old time music, Irish, and Bluegrass jams. I think you’ll be surprised with how many are out there. If you’re in Minnesota, and Minneapolis or St. Paul in particular, you’ve got an amazing resource down in Richfield. The Homestead Pickin’ Parlor has jams just about every night of the week. It’s a dream for anyone who wants to get their chance to test their chops. The jams go from beginner to advanced in a friendly, relaxed atmosphere. That’s an ideal situation. 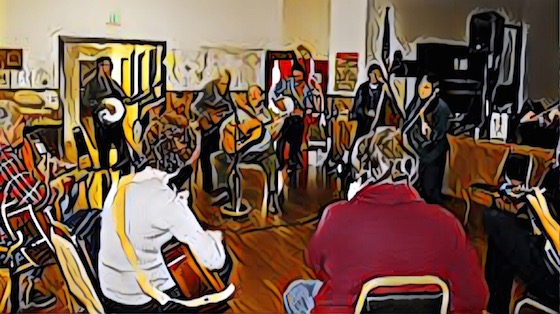 For the rest of us, unless you’ve got a Pickin’ Parlor in your community, it’s a little more challenging – but not that much more. Go online and look up “Music jams” on Google. You can get specific saying, “Old Time Music Jams” or “Bluegrass Music Jams” or “Irish Music Jams” or even “Classical Music Jams”. Something should pop up for you.

You could even do an open mic night at a local restaurant, coffee shop, or a bar. Why not? Trust me, I’ve been to a few of these things. Open mic venues are very forgiving. You can hear someone who is amazing, and then three minutes later, someone who is…perhaps…not ready for prime time. But so what? – I even joined in, played my guitar, and sang my own songs at these for a while.

So, I’ve taken a deep breath, and I’ve started to go to jams. Now, to be fair, I’ve done a lot of jams with my guitar and mandolin. Going to a jam is nothing new for me, but this time I’m taking a violin and leaving the guitar and mandolin at home. (Neither of them seems pleased with this situation.)

Eighteen months ago, when I started taking violin lessons, I stopped going to jams. I went from being a regular to a dropout. I just wanted to learn how to get a decent sound out of a violin. So, now I was heading back to a jam at the O’Neill Public House in Portland, and I was a little concerned about my reception by the other players. Would it be friendly? Antagonistic? Would they even remember who I was? Will I be any good?

Do you see what I was doing? I was letting that side of my brain that didn’t want to go create excuses for me to stay at home. Why not wait a week? Two weeks? A month? Why even bother to do this? What’s the point? Blah, blah, blah.

I’ll let you in on a little secret – I get this way with just about everything. I always have a couple of minutes of doubt. However, I also know this will pass, and it did.

I packed up my fiddle, went downstairs and told my wife what I was going to do. She was thrilled and encouraging. So I got in the car, drove over to the O’Neill Public House, parked, took a deep breath and walked in while they were playing a song.

How did it go?

Well, it was great. I was greeted with warm smiles and handshakes. It was as if I’d just missed a week or two. Now, they were surprised to see a violin in my hands (fiddle in that context). “What’s this? You don’t have your usual instrumentation!” I explained when I learned a mandolin and a fiddle (violin in other contexts) are tuned the same, that I thought I’d just move from one to the other. It’s just taken me 18 months to start to get a decent sound out of the thing (fiddle/violin).

I also explained I’d just be playing chords in the background. I wanted to ease myself into this entire situation. I wasn’t embarrassed to set a chord chart on the table next to where I stood and frequently refer to it with each song. While I said I’d rather not solo, when it came around to my turn I just dove in and gave it a go. I was pretty lousy, but when I finished they broke into applause and I bowed.

An hour later I went home feeling great. Was my playing any good? Not really, but I know what I have to work on when I practice.

My goal is to do this jam, and another jam at the White Eagle Saloon, throughout the winter and the spring, because I have a goal………

I’m going to hit 70 years old in May. For my birthday present I plan to go to the Centrum Fiddle Tunes Workshop, in Port Townsend, Washington.

This is an amazing workshop, and I think you should join me.

I’d like to show up to the Fiddle Tunes Workshop with some experience under my belt rather than spend a week floundering around.

So, get out there and play. It’s fun.

November 20, 2018 at 07:43 PM · LOL! I really enjoyed reading this. Definitely, one of the many joys of being an adult violin student is getting over your self-consciousness and learning to see the humor in it all!

November 21, 2018 at 04:29 AM · When I was a junior in college, so this is 1978, the chair of my awesome music department--recognizing he had a weird music student, into fiddles, banjos, ragtime piano and what-all--handed me a brochure he had just received, promoting the (first?) Festival of American Fiddle Tunes at Centrum in Port Townsend. I had been playing the fiddle for about three years, and I was terrible. That Festival, at the time run by Frank Ferrell (wherever you are, I am forever grateful) took me right into the heart of American fiddle music. I spent years, YEARS, absorbing what I learned there. I went again in 1980. I have no idea what it's like now, but that was like the hajj for this fiddle player.

November 21, 2018 at 09:55 AM · In several cities in the world there are the late starter orchestra. I started learning violin in one of them couple months ago and have a lot of good things to say about it.

November 21, 2018 at 12:51 PM · Gone to Fiddle Tunes a few times. It is always a premier experience with an abundance of learning experiences. You will have fun.

November 26, 2018 at 02:12 PM · Fiddle Tunes is still as amazing as ever after over 40 years. Sign up for 2019 is on line now. It is a great place for beginning adult fiddlers at any age. For years I have helped out with the kids program where local kids playing in school programs join us at different levels. Besides the music, it is a magical place for a camp, situated on the Straits of Juan de Fuca at old Fort Worden in Port Townsend, WA.