September 1, 2021, 12:24 PM · The final day of August came with more sad news, to the world of music and to my own, with the passing of German composer Siegfried Matthus. After the passing of my friend, mentor and collaborator conductor Michael Morgan, it is astonishing that the two men never met and yet they were connected to each other through me and passed away seven days apart.

Siegfried Matthus was a friend to Kurt Masur, to the Berlin Philharmonic and, I am honored to say, also to me. When I was a student at the Manhattan School of Music, I was concertmaster of the school’s orchestras, and we were thrilled when we learned that we would play under the baton of Kurt Masur. On the program was a work by a dear friend of his, Siegfried Matthus. Matthus was a prolific composer, who by the end of his life had written more than 600 works and founded the Schloss Rheinsberg chamber opera festival, which he directed until 2018. 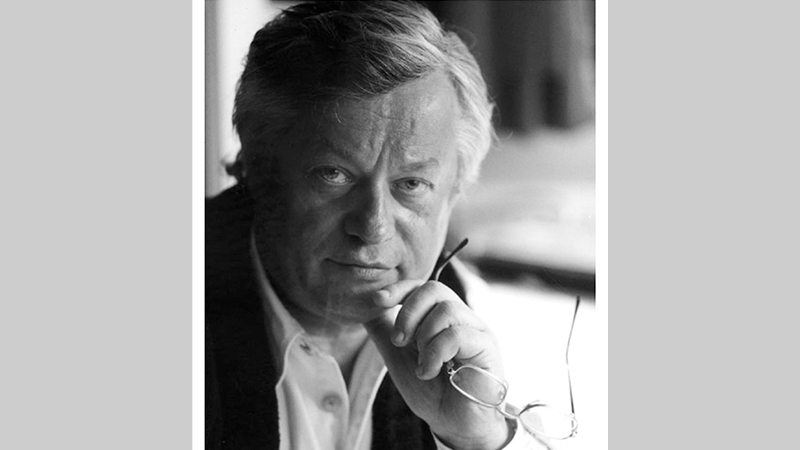 The piece, the Manhattan Concerto, not only had significant violin solos, but it actually began with a violin cadenza. At the first rehearsal, we were all as alert and ready as a drawn arrow, but I remember second-guessing the barely perceptible nod that Kurt Masur gave to me to start the piece. He repeated the gesture, slightly more deliberately, and I dove in with everything I had. After the rehearsal, Matthus, came to seek me out. Though he didn’t speak a word of English and I did not yet speak much German, I will never forget the warmth in his eyes (and were those moisture drops of emotion or mere biology?) when he said to me "wunderschön," indicating my playing with a gesture.

Several years after school, I embarked on an independent study trip to Berlin, funded by the Mellon Foundation and awarded by the New Jersey Symphony, to study with several concertmasters of the Berlin Philharmonic. While I was there, I ventured to seek out Siegfried Matthus, who was at the time the director of the Deutsche Komische Oper. By then, I had learned to speak German with functional fluency, and we went to lunch, where he told me that he wanted to write a piece for me. I was honored and thrilled. Since that original Manhattan Concerto had also featured significant percussion solos and the principal of the orchestra, Joe Tompkins, had become my husband, Matthus proposed to write the piece for us as a duo. (See video below)

I remember we asked him to limit the battery of percussion to certain instruments so that we could more easily assemble and perform the piece around. Well, he completely ignored all of that and proceeded to write it for a large battery of percussion (read: everything but the kitchen sink), which even included pitched nipple gongs that were not possessed by anyone in New York City! My husband acquired each of the instruments just for that piece and, ultimately commissioned by the Pine Mountain Music Festival, we got them all to the upper peninsula of Michigan, where we performed the premiere concerts.

Matthus and I stayed in touch over the years, and he occasionally sent me pieces for my consideration. He was a brilliant composer, and I was delighted with the idea of working with him closely on some new project. However, nothing quite hit the mark for me until one day his American manager sent me the score and recording for his new (ultimately to be the last) violin concerto, "Dream of a Summer Night," written on the occasion of his 80th birthday. I was absolutely smitten with the piece. It was for large orchestra and opened with a profoundly expansive chord progression and opening lines that instantly tugged at your emotions and topped off with shimmer and atmosphere in the chromatic broken thirds in the violins.

As was his fashion, the piece is filled with percussion, beautifully crafted in mostly the high range, with triangles and crotales, gilding the progression of each walking harmony. The texture gives way to a vision of fanciful forest creatures, animated with cymbals and wood blocks. The piece passes through a brooding and anguished, string-laden, passacaglia-like third movement, clearly wrestling with weighty questions bearing down on one’s very soul before breaking into a shift of mood, a sunrise deep in the forest with Wagnerian birds chirping their motives. The piece builds to the most majestic attempts to reach the C major apotheosis but needing to wind up several times in a row to get there, accompanied by roiling and bending timpani rolls. When the full orchestration finally achieves the grand C major, it’s like the gates of heaven itself fling open. Rather than continue in such grand fashion, and ceremonial escort, the violin is left uncharacteristically alone to proclaim the glorious high C to the work’s conclusion. Even from that first hearing, the piece felt like he was foreshadowing his life’s bookend, and it put a lump in my throat.

Siegfried Matthus invited me to perform the U.S. premiere of the piece, and I was thrilled when Michael Morgan invited me to perform that premiere with him and the Oakland Symphony during the time that I was also on Broadway performing as the "Fiddler" - the Violin Soloist of Fiddler on the Roof. Preparing the Matthus concerto, I felt myself reaching for not only all the right notes but also the embodiment of the role, such as I watched every night from our company on stage. I remember playing several run-throughs for my fellow Broadway company friends. First, actor Adam Grupper, "Anatevka’s" Rabbi, then Jessica Hecht, our "Golde," then my friend Tess Primack organized a large group of 20 or so actors and dancers who listened to me play- unaccompanied, on a double-show day, between shows. They loved the piece and were so supportive of me as I prepared to leave our show for the weekend to play the premiere. Those informal performances are part of the magical memories I have from those 13 months on Broadway.

For the performance in Oakland, I speak about that in more detail in my recent tribute to Michael Morgan. But I will add here that while I was in Oakland for the main performance with orchestra, I also performed the work for a Music Kitchen performance in collaboration with the Oakland Symphony at a shelter for homeless veterans. Even though, again, I played the modern work for them unaccompanied, they were really quite taken with it. I sent my informal recording of the encounter to Matthus. And again, even though he still did not speak any English, he grasped the profound effect the piece had on the listeners and in a setting he probably had never experienced before. He was inspired to compose a new piano accompaniment for the piece, and it is my understanding that, along with the Manhattan Concerto duo version, both are engraved with publisher Breitkopf und Härtel with me as the dedicatée.

Sometimes a concert is just a concert, celebrated and enjoyed but not necessarily a pivotal shift in one’s life experience. But as a master’s student, my meeting of a dear man, composer Siegfried Matthus, lead to a rich facet of my life I would not otherwise have experienced. I’m honored and forever grateful that he wrote a piece for me and my husband Joe and invited me to premiere his last violin concerto. (Also not lost on me is that it wouldn’t have been possible had I not learned German!) His Dream of a Summer Night became my dream opportunity to work with two people, Siegfried Matthus and Michael Morgan, who inspired me, impacted the artist I am today and whose memories I will cherish.