Bach, Beyond the Concert Hall

Bach titled 30 of his works "Inventions," but the word also describes his mind. Similarly, during the pandemic, the participants at my Bach workshops took the idea of "inventiveness" to a new level. Working within the limitations of Covid times, they conceived of a startling array of new performance ideas, drawing on ideals, enterprise and sheer flights of fancy. While we all look forward to safer times in concert halls with live audiences, perhaps there has been a silver lining to these pandemic conditions. Like the bright stretto entrances in Bach’s fugues, new ways to share music have been constantly popping up. I wanted to share some of those ideas, which I think will remain inspiring beyond the scope of "pandemic performances."

But first let's talk about Bach, whose incredible creativity and productivity served as our inspiration. J.S. Bach’s musical activities were as numerous as they were diverse. His innovative, restless mind was constantly inventing. 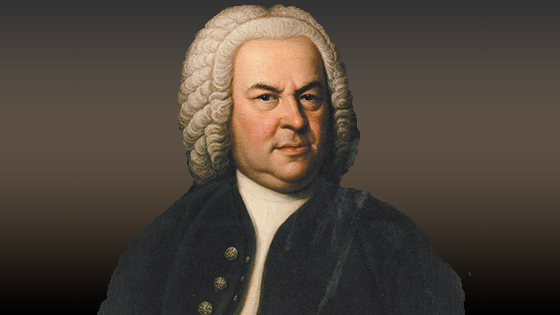 Working in a variety of genres, Bach wrote an enormous amount of music — more than 1,000 works! He wrote for churches, for royalty, for the changing of the town council. He sang, conducted, and played violin and keyboard. Widely admired as an improviser, he once created for a king a six-part organ fugue, on the spot — a feat author Douglas Hoftstader compares to playing 60 simultaneous chess games, while blindfolded...and winning them.

En garde! At one point, Bach challenged a fellow keyboardist to a harpsichord duel. He wrote his famed Goldberg Variations as an antidote to insomnia, and his beloved Brandenburg Concerti as a job application. In addition to some 350 church chorales, Bach also wrote a Coffee Cantata--- a comic dialogue, in which a father chastises his daughter for her dependence on caffeine. (Ahh—- music for the ages!)

Some of Bach’s pieces, like the Art of the Fugue and The Musical Offering, were essentially his contrapuntal crossword puzzles — mathematical playtime, complete with reversible "crab canons." And The Well-Tempered Clavier, now performed worldwide, was simply Bach’s pedagogical exercise for his sons. Our concert stages are all the richer now for his fatherly duties.

So what better place for coming up with new ideas than a Bach workshop?

In normal times - and this coming summer - our Promisek Bach+ Workshops for string players happen in Bridgewater, Connecticut. But due to the pandemic, we held them virtually during the summers of 2020 and 2021. As workshop director, it was my great fortune to be joined by outstanding, forward-thinking assistant directors--- first Sarah Zahorodni, and then Marika Basagoitia. Inspired by our rapidly-changing times, we added a new dimension to our workshop, asking our participants: Rethink the concert format. Come up with a non-traditional way to share your music.

The responses were fantastic. Diverse, original, they ran the gamut from substantive and meaningful to revolutionary and wildly creative. The freshness of the ideas did justice to Bach’s ever-inventive mind.

Arranging community musical events during a pandemic, of course, poses its own challenges. To reach audiences in a way that was meaningful, yet safe, required heightened creativity. But underpinning all the proposals was the knowledge that music can inspire, encourage and lift spirits.

This was true even as live events were replaced by virtual, recorded, or socially-distanced performances. Freed from the expectations and structure of traditional concerts, these self-starter projects also allowed for more personal ideals and choice. In addition to more traditional repertoire, many chose to include repertoire by composers from under-represented demographic groups.

As in Bach’s Coffee Cantata, familiar formats for sharing music took on refreshing new twists. While some performers sent videos to distant relatives — one as a birthday present for her grandmother, for example — technology allowed performers to combine playing and speaking in ways that actually proved more informative and personal than a live concert.

Sarah devised a roving outdoor show that circled the buildings of Connecticut retirement homes, greeting listeners at each entrance. Alex and Gloria planned demonstrations for high schools in New York and Texas, aiming to share specifically with minority students both the joys of classical music and how to audition for musical study in college. Anagha thought up a concert series as a fundraiser for providing music lessons for children with limited resources in Pennsylvania.

In Virginia, Nora paired music with visual art, seeing ways to draw her nonmusical friends more into the world of sound. Grace realized she could pair up with her brother, a chef, to offer dishes that corresponded to the musical offerings. Technology allowed Kristen and Nathan to collaborate with an old friend based across the country, offering a mix of pre-recorded, layered ensemble performances and real-time interaction to schoolchildren in Florida. Kiana was inspired to make long-term plans for a music festival in California that celebrates Filipino compositions and culture, combining outdoor performances with dance, art and food in an informal setting.

Though no one recreated Bach’s harpsichord duel, novel scenarios sprung forth. Sayumi lives near an overly long traffic light. She planned miniature musical moments to be shared with drivers as they waited for it to change. Marika wanted to bring music to veterans in a safe way, but incorporate the beauty of her Colorado surroundings. She performed a concert among the pines along a mountain trail, and live- streamed it to a local Veterans’ Center. 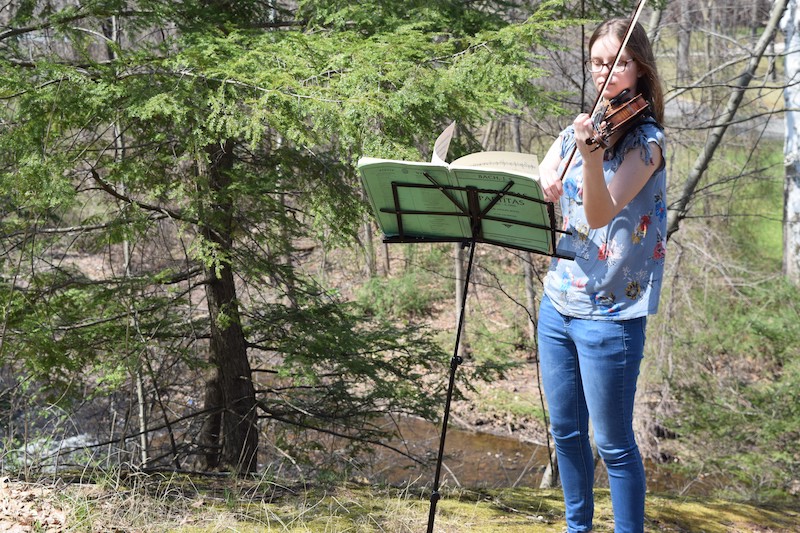 Marika plays Bach on the trail.

Yuko envisioned ways to incorporate in a Tokyo performance Ikebana, the Japanese art of flower arranging, each bouquet reflecting aspects of the specific solo Bach movement. 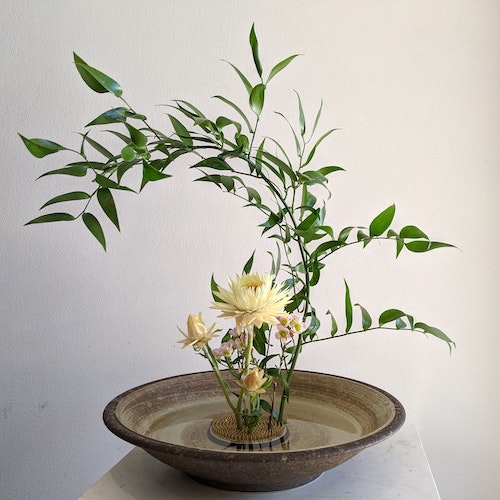 Finding himself in a Missouri airport beset with flight delays, John took out his violin and joined some musical friends. Travelers’ frustrations evaporated with the delights of an unprecedented combo: a tuba, three violins, a clarinet, and a French horn. Voila! Another participant focused on those in wheelchairs, finding that they could be wheeled to the end of a pier over a lake to enjoy a serenade of Baroque music.

Many believe that the famous Chaconne for solo violin was Bach’s outpouring of grief when his wife Maria Barbara died. Art is one of the ways we can respond to our most harrowing experiences. Helena zeroed in on the site of recent tragic shooting in her hometown—the King Soopers grocery store in Boulder, Colorado. She performed outside the store, transforming a place of horrific loss with a moment of hope and beauty. 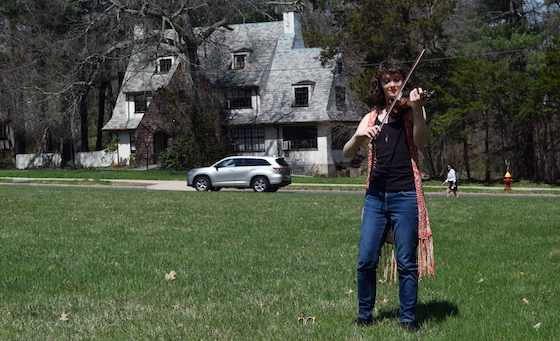 Another participant was aghast when she learned about threatening confrontations between musicians and Palestinian-Israeli border guards. She is raising money to commission pieces that specifically reflect such intense conditions: "If you were playing for your life, what would you play?"

The vastly expanded technological capabilities enabled so much musical exchange over these two years; they will continue to flourish afterwards. More importantly, as we work our way through another year of limited social contact, community events such as these can be especially meaningful. Regardless of challenge and circumstance, it is clear that long after the Covid-19 crisis, music will find its way in new ways. And enterprising musicians will continue to find novel ways to reach out, connect, and share music with others.

For information on Promisek Bach+ Workshops for this summer (August 9-14 and August 16-21) please click here.