August 24, 2021, 11:16 AM · Our brother, our mentor, our friend, our Maestro is gone. Conductor, Michael Morgan, passed away in Oakland, California Friday evening August 20 th at 63 years of age. After an initially successful kidney transplant, tragically, major complications followed three months later. The sadness and shock have reverberated around the world among so many artists, wherever great music is made, because Michael touched so many of our lives. 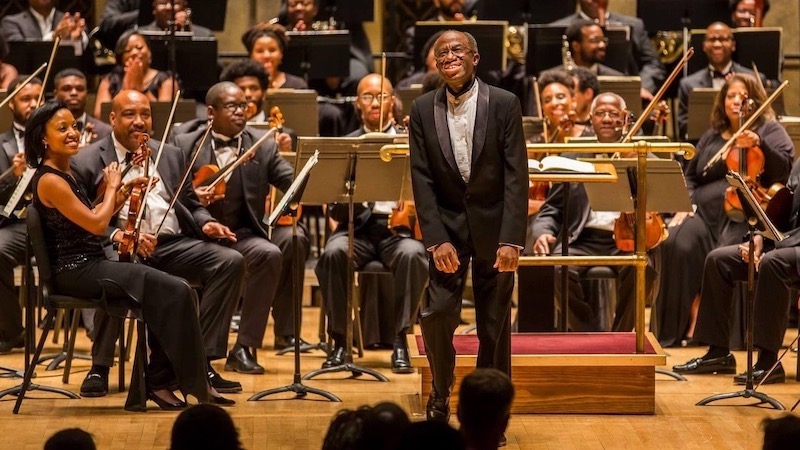 Maestro Morgan was beloved by the Oakland Symphony, where he was their celebrated Music Director for 30 years, placing him among the longest-serving great music directors such as Zubin Mehta, Ivan Fisher and Valery Gergiev. Michael began conducting at 12 years old and had early success as winner of the Hans Swarowsky Conducting Competition, which lead to international prominence, including his opera debut conducting the Vienna State Opera at 29 years old. He subsequently became assistant conductor to George Solti at the Chicago Symphony, Leonard Slatkin at the St. Louis Symphony and was chosen by Leonard Bernstein to conduct his New York Philharmonic debut in 1992.

Sharp of wit and brilliant of artistic mind - that was Maestro Michael Morgan. I had the great honor of working with him as concertmaster and soloist, from my student days straight through to the present moment. That is primarily due to the Gateways Music Festival, which is how I first came to know him. Similarly long-serving, Michael Morgan was Music Director of the 25-year biennial Gateways Music Festival since its founding. As I reflect on my own long history with Michael, not only did I play my first Tchaikovsky Violin Concerto as a soloist with him, but through his vast knowledge of the black composers that many in the field are only now beginning to seek out, I discovered and played my first notes of symphonies by Florence Price, William Dawson, Olly Wilson and contemporary composers such as Carlos Simon.

Because of that invaluable introduction by a masterful artist, and Gateways Music Festival's visionary programming, I still champion many of these composers today. I not only played the New York premiere of the Florence Price Concerto No. 2, but I also had the honor of playing it with Michael Morgan among the majestic pines at his cherished Bear Valley Festival in California. With Michael, I also made my London solo debut with Chineke! at Queen Elizabeth Hall, performing the Concerto Grosso by Errollyn Wallen; and I performed as soloist in the Beethoven Triple Concerto at Gateways.

One of the collaborations for which I am most grateful to Michael is when I was invited by German composer Siegfried Matthus to perform the U.S. Premiere of his newest violin concerto, Dream of a Summer Night. It was Michael, a fearless and facile champion of new music, who invited me to perform it with him and his fabulous Oakland Symphony. Since I was also on Broadway at the time as the "Fiddler" - the Violin Soloist of Fiddler on the Roof, he also agreed to my characteristically eclectic programming, giving me my first opportunity to perform with orchestra the Fiddler solo piece by John Williams, the same one performed by Isaac Stern in the 1971 film, as well as the John Williams Schindler’s List. I will remember that concert forever. As always, Michael was a solid, yet sensitive accompanist who could easily account for every 64th note in the trickiest places in the score while also soaring and stretching right with you and as much as you could ever need.

Under Michael’s impassioned baton, every section of the Oakland Symphony brought that Matthus score (and the John Williams) to life in shimmering color and powerful excitement, from the orchestra’s warm, atmospheric sound, to the ethereal triangle and crotale notes in the percussion, to the solo tuba which accompanied me in the Scherzo. Though I had not yet completed my commissioned Fiddler solo album, The Fiddler Expanding Tradition, and never had the opportunity to perform any of those pieces with Michael, I was thrilled to expand my wings from eight nights a week on Broadway to the concert stage for the very first time.

In this past year, most of my other in-person concerts were simply postponed or rescheduled due to the pandemic. But a postponed Barber Violin Concerto and many other projects in development with Michael are gone forever. In all, I had the honor of playing eight concertos and solo pieces with Michael, now even more precious in hindsight.

As concertmaster of Gateways, I recall many happy rehearsal hours doing the detail work of an orchestra. Michael Morgan was a strong believer in the Gateways Festival’s mission to support professional classical musicians of African descent and to inspire through the power of performance, so much so that each year he paid his own transportation costs and never accepted a fee. On the podium, he often liked to say that Gateways was like one big family reunion. He led with an incisive wit alongside the sharpness of his artistic mind and frequently had the entire orchestra in spontaneous uproarious laughter. I would always think to myself, "Where else in my career does this happen??"

But just as sharp and quick as his humor could flow, his critiques could also flash. With the lightening of humor and critique striking so frequently and interchangeably, one would never know exactly which zap would happen next! I definitely recall an occasional singe, but I enjoyed a wonderful working relationship with Michael on both sides of the Atlantic. As concertmaster, when I give verbal direction to a violin section, I always try to do so unobtrusively so as not to waste any valuable rehearsal time. I noticed early on that as I would turn around to say something to the violins, the podium and thus the entire rehearsal would always become very quiet and come to a stop, as Michael was not only listening but giving me plenty of space in which to work. It certainly made me feel good when one day he told me, "You always say what’s in my head and so I don’t have to! It’s so easy to work with you no matter where, concertmaster, soloist, whatever!" 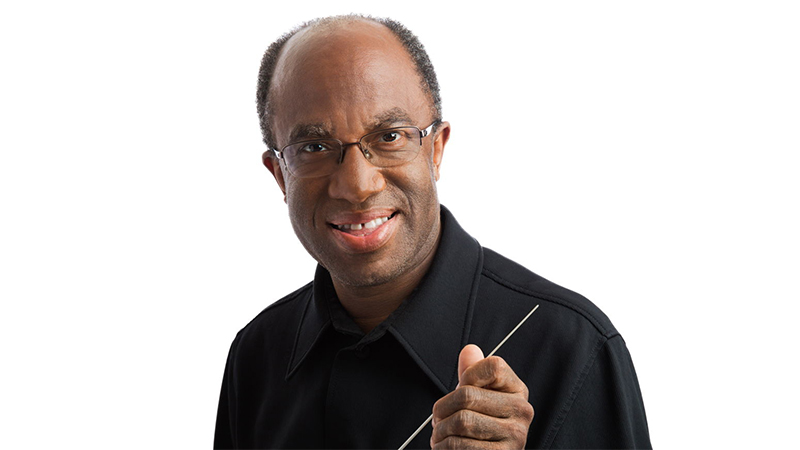 Michael Morgan was a generous soul who truly loved being music director in a single community - Oakland, California. He once said how he loved on a given day to be able to make an impact on a local young student and to then go to the grocery store and have a checkout clerk ask how things were down at the symphony. He also brought world-class musicians to Oakland - most recently pianist Emanuel Ax, who I also know as a champion of bringing arts to the community through my Music Kitchen organization. It truly does speak to the level of commitment and seriousness he had in his work.

Michael said revealingly in an interview, "Being gay, being Black, each one puts you farther outside than the last…" Michael Morgan should be remembered as a great conductor, unqualified by race. He certainly was one of the greatest conductors I ever had the privilege of working with. But in this current climate of discussions of diversity, equity and inclusion, which all too often turn to focus on educating not-yet-born generations, one wonders what may have become if Michael had enjoyed the stratospheric propulsion which often accompanies the kind of illustrious and world-class positions he earned from an early age, the "pretentious things" in his resume he mentioned with the smile you can read on the page.

This season will mark a historic and momentous debut for the Gateways Music Festival at Carnegie Hall, with a program from Brahms to Batiste planned by Michael Morgan himself, in collaboration with several of us on the Artistic Committee. Upon his passing, I was reminded of the same historical parallel that Gateways Festival Director Lee Koonce also said in his tribute: To this particular "mountain top," even in the year that it is to happen, Michael will "not get there with us." How we will face the Gateways Carnegie Hall debut without him, I do not even know. But the fierceness of his excellence, from his first day on the podium, to 25 years of Gateways, to his debut with the San Francisco Symphony just two months ago, is what made this moment possible. If not in body, we will carry Michael Morgan with us in spirit. At Carnegie and for the rest of our lives.

August 25, 2021 at 08:57 PM · I had the privilege to play under his baton as a violinist in the Civic Orchestra of Chicago back in the 80's. I am very sad to see this news. Thank you for sharing this tribute to a wonderful musician and leader.

August 25, 2021 at 11:22 PM · Kelly, this is such a beautiful tribute, thank you so much for sharing it. You really capture what he was like, while also sharing his many accomplishments and illustrating how very much he did for the musical community.

Paula, I was very briefly in the Civic Orchestra as well, one of the summers when I was at Northwestern ('88?). I also played under Michael's baton. He affected very, very many people!

August 26, 2021 at 11:20 PM · It was a wonderful tribute indeed. i was disappointed with the author's need to use the gratuitous modifier "unqualified by". I heard a very satisfying performance of the. Verdi Requiem in the mid-nineties he conducted in Oakland where we were visiting. I remembered the performance for years but did not remember the race of the conductor until I read of his passing and correlated dates. I mentioned the performance to my wife and asked her if she remembered the conductor. She remembered the fine performance but she did not and could not recall that he was black even when I mentioned it. Mind you she has sung the Verdi Requiem herself a number of times and could not tell you the names of any of the conductors some of whom were quite excellent. I don't have a track record of listening to many of his performances but I do know he was the real deal. .