At the end of last season, after a concert, a group of girls came up to me with an art card they'd created. It read, "Hilary Hahn Sleepover!" and was covered with all sorts of birthday references. Turns out my concert was part of a bigger event; all the kids had attended to start off the birthday girl's sleepover, and they were on their way to her house for the rest of the party. I thought that was a terrific idea. When I was their age, I loved birthday sleepovers. It was such a treat to go to TGI Friday's for dinner and then go to a movie en masse, decorate the cake together, and, the next morning, to wake up on the living room floor surrounded by friends. (Apparently I talked in my sleep on several occasions.) Finally, we'd rush to the table for animal-shaped pancakes, and then the parents would arrive to drive everyone home. But no one I knew ever went to a big event to kick it all off.

I thought this group's concert sleepover sounded like so much fun, I started trying to figure out other ways to connect birthdays and musical events. I wanted to honor a more unlikely subject than a pre-teen: someone who might not have had a sleepover within the past twenty years: someone important: someone wry yet perceived as humorless, who would in all actuality get a kick out of a random mass birthday event: 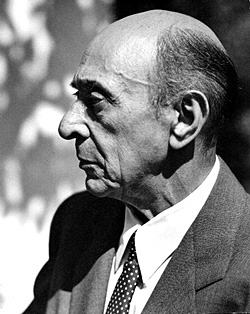 Having just released a recording of Schoenberg's unfairly neglected Violin Concerto, I was fired up. Not that this year would bring a particularly big anniversary; that would have been too symmetrical. This would be simply his 134th birthday, as good an excuse as any to bring people together in his memory. But now I needed a plan. Arnold Schoenberg Sleepovers? I tried to imagine a vast array of music dorks (like me) of all ages, ordering peanut-butter-sandwich cakes in the shape of Schoenberg's head, making crafts modeled on tone rows or building miniature instruments, and then, at the end of the evening, laying out the sleeping bags and drifting off to the Sprechstimme dreamland of Pierrot Lunaire. Or Schoenberg Listening Parties? – at which people would gather on steel-and-leather sofas to roll their own cigarettes and talk musical philosophy over a marathon of notes before passing out, drunk on theory and innovation. Maybe costume parties themed on the number 13? I pictured some odd gatherings indeed. I couldn't think of any context that would draw everyone in.

Then it occurred to me that I could provide a location where everyone interested could join together – people from many different backgrounds and ages, who didn't know each other, who were all either fans of Schoenberg or curious about him. A channel on YouTube seemed like the best location; I could post self-recorded answers to questions I'd receive before the big day, September 13, and viewers could post video responses to anything under the sun (as long as it's kid-friendly). We could create a nice little tribute to the composer. And all of us dorks and geeks would be happy.

Thus the Hilary Hahn YouTube channel was born. It will launch on September 13. In the end, then, Schoenberg not only pushed me in new directions with his violin concerto, he led me to experiment on the Web – Schoenberg, a man who never even heard of the Internet. Something tells me he'd enjoy that irony.